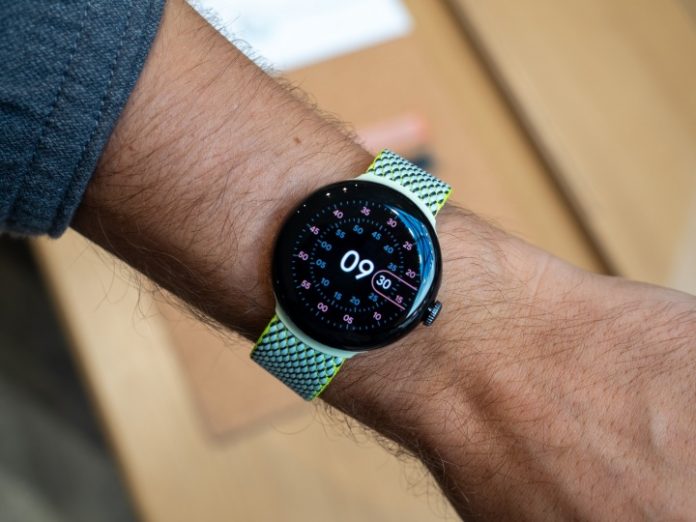 The Apple Watch Series 8 has a new rival: the Google Pixel Watch. Announced as part of October’s Made by Google event, it brings Google’s streamlined design and software chops to the now-familiar smartwatch. It comes in a sleek, circular, stainless-steel casing; runs on Google’s own Wear OS 3.5; offers health-and fitness-tracking software in partnership with Fitbit; and provides a helpful Emergency SOS feature.

At $350, it’s pricing puts it in direct competition with the Apple Watch Series 8, which begins from $399. However, while it has the Google name behind it, just how good is it as a smartwatch, and how does it compare to Apple’s latest wearable? We find out in this comparison test, which looks at the specs, designs, displays, software, and special features of each device.

Google has given the Pixel Watch a characteristically minimal and clean design, with the device housed in an 80%-recycled stainless-steel circle frame with a side button. It comes in three colors — Matte Black, Polished Silver, and Champagne Gold — each of which comes with its own particular strap design.

While you could argue that it doesn’t really take any design risks, its compact size and tidy sculpting help to distinguish it from the established design offered by the Apple Watch Series 8, which doesn’t really depart from the squircle form of the Apple Watch 7. This means you get a choice of two sizes (41mm and 45mm, as opposed to 41mm only for the Pixel Watch), a choice of different materials (aluminum and stainless steel), and a wide variety of bands. Again, nothing spectacular or out of the ordinary, but this design has worked well for Apple up until now, so it’s understandable that it isn’t departing from it just yet.

The Apple Watch Series 8 features an always-on LTPO Retina OLED display, with the 41mm version having a resolution of 352 x 430 pixels, versus the 45mm model, which offers 396 x 484 pixels. By contrast, the Pixel Watch houses a 1.2-inch AMOLED display, with a resolution of 450 x 450 pixels. Both offer around 1,000 nits max brightness, yet some may be put off by the fact that the Pixel Watch’s screen is noticeably smaller than even that of the 41mm Apple Watch 8, which comes with 1.69-inch display. What this means is that the Pixel has tangibly larger bezels than Apple’s device, something which may detract from its attractiveness for some.

Still, the display itself offers a similar pixel-per-inch density to that of the Apple Watch’s display, and given that it boasts a relatively new design overall, this balances out the large bezels.

The Google Pixel Watch is powered by an Exynos 9110 chip, as well as a Cortex M33 co-processor. The 9110 is constructed using a 10nm manufacturing process, which is worse compated to the 7nm process used with Apple’s S8 chip (a smaller number means you can pack more transistors into the same space). As such, it’s likely that the Apple Watch Series 8 will operate a little more smoothly and quicker than the Pixel Watch, with Apple claiming that it’s 20% faster than the Apple Watch 7.

Moving to battery talk, the Apple Watch Series 8 lasts around 18 hours on a single charge. This was confirmed by our review, which found the device ended most days with around 30% to 40% of its charge remaining, even when using it consistently. As for the Pixel, Google promises that its 294 mAh battery will typically last around 24 hours (note: the Apple Watch 8 has a 282mAh battery). While we haven’t tested it enough to confirm this, the smaller screen size of the Pixel should indeed help it last a full day for most users.

In terms of charging, Google claims you can take the Pixel to 50% in 30 minutes and to 100% in 80. With the Apple Watch, our review found that it can go from empty to 80% in 45 minutes, so it has a slight edge here. Combined with a faster processor, this gives it the win.

In keeping with its uncluttered design, the Google Pixel Watch offers the core range of sensors you’d expect from a smartwatch in 2022 without trying to be as comprehensive as the Apple Watch Series 8. Namely, it comes with a blood oxygen sensor, an electrical sensor, and an optical heart rate sensor (in addition to very standard stuff such as a compass, altimeter, and accelerometer). In tandem with a Fitbit Premium subscription, which is offered for free for six months, this lets you track everything from the quality of your sleep to your heart rate.

This is good, but it’s overshadowed somewhat by the sheer wealth of options provided by the Apple Watch Series 8. In contrast to its predecessor, it adds a new skin temperature sensor designed to detect very subtle drops in body temperature, as well as a sensor underneath the display to track temperate changes during your sleep, both of which are aimed at detecting illnesses early and assisting with ovulation monitoring. On top of this, it keeps the ECG, SpO2, heart rate monitor, and other sensors from previous generations, making it very powerful as a fitness and health-tracking device.

As noted above, the Pixel Watch uses Wear OS 3.5 out of the box. This features such additions as a UI refresh for improved at-a-glance fitness information, a rejigged weather app, more smart device integration options, as well as more workouts and customizability for third-party fitness apps. It all makes for a clean and user-friendly OS, which is more or less exactly the same thing you can say about watchOS 9, which the Apple Watch Series 8 uses. This brings in four new watch faces, as well as several Workout app updates, improved sleep tracking, atrial fibrillation (AFib) history, and a new Medications app.

In terms of updates, it’s likely that the Apple Watch will be supported with core updates for longer. That said, Google hasn’t yet clarified for how long it will support the Pixel Watch, and given that it has improved its smartphone updating game in the past couple of years, we’re leaving this round a tie — for now.

There’s not much in it when it comes to special features, with both boasting largely the same perks. For instance, each has an always-on display, Emergency SOS functionality, fall detection, and the ability to pay for stuff at stores (via Google Pay and Apple Pay, respectively).

That said, each has a couple of features that are a little unique. The Apple Watch, for example, also includes crash detection, which uses a combination of the watch’s sensors and artificial intelligence to detect car accidents and automatically call 911 for help while providing your location and alerting your emergency contacts (only if you don’t respond to a notification within 10 seconds). As for the Pixel Watch, it has been IP68 and 5ATM certified, whereas the Apple Watch has only IP6X certification, although Apple does affirm that it’s also water-resistant up to 50 meters, like the Pixel.

The Pixel Watch is now available for preorder from Google, starting from $350 for its base model with GPS. There’s also the option to have it with cellular LTE connectivity, which will cost $50 extra.

The Apple Watch Series 8 is available in the U.S. and over 40 countries. The base model with GPS connectivity and 41mm case size costs $399, while models with cellular connectivity start at $499. The 45mm model starts at $429, while its cellular sibling costs $529.

The Apple Watch Series 8 may not have added too much in comparison to the Apple Watch Series 7, but it does win out against the Pixel Watch overall. Its superior performance and more expansive health-tracking features give it the advantage, even if the Pixel Watch certainly has an appealing design, easy-to-use software, a good range of fitness options, and some welcome special features to boot. Of course, if you own a Google Pixel smartphone (rather than an iPhone), it makes more sense to have a Pixel Watch to go with it (and vice versa), and you certainly won’t be disappointed if you do.