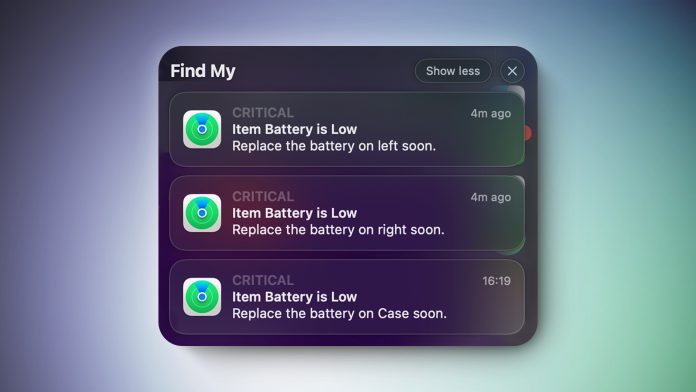 A bug is alerting some second-generation AirPods Pro users to “replace” their battery soon, according to various online reports.

The bug seems to trigger battery replacement notifications from the Find My app on nearby devices when the battery of the ‌AirPods Pro‌ earbuds or MagSafe Charging Case is low. The second-generation ‌AirPods Pro‌ feature enhanced ‌Find My‌ functionality thanks to a U1 chip for Precision Finding and transmit their battery levels at all times, so it seems likely that the alert relates to these new features.

The notifications urge the user to “replace the battery on… soon,” even though it is not possible to replace AirPods batteries and the device simply needs to be recharged. Users experiencing the bug may not be immediately aware that it relates to their ‌AirPods Pro‌, since the item is referred to in notifications as simply “left,” “right,” or “Case,” leading to somewhat incoherent alerts.

The notifications seems similar to that used for the AirTag when its CR2032 battery is almost depleted and needs to be replaced, so it seems that the system is conflating the two products. One theory suggests that Apple used much of the AirTag’s firmware for the ‌MagSafe‌ Charging Case, causing identical alerts even where they do not make sense.

Users have complained about the bug on the MacRumors forums and Reddit, but it is not clear how widespread the issue is. While Apple has not yet acknowledged the bug, it will likely be resolved via a software update in due course.