HomeNewsWe may have just seen the Meta Quest Pro, and it looks...
News

We may have just seen the Meta Quest Pro, and it looks super sleek 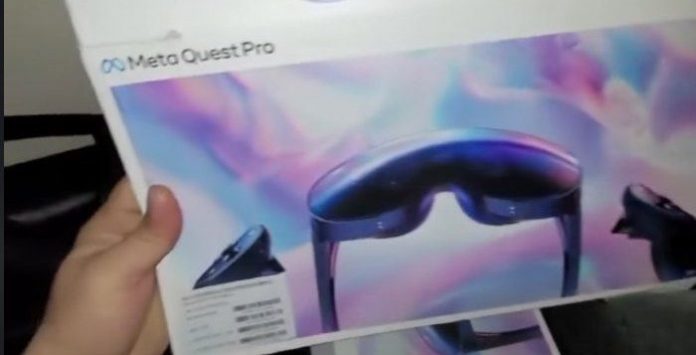 Meta is expected to launch a “Meta Quest Pro” VR set sometime this year, and the first images of this mythical device may have just surfaced online.

The Verge reported on a prototype of the top-secret headset left behind in a hotel room and subsequently discovered by Facebook Gaming personality Ramiro Cardenas, aka Zectariuz Gaming.

The headset has a much sleeker look than the Meta Quest 2 (formerly Oculus Quest 2), with a rounded notch for your nose and a single wraparound strap. It looks a bit like a giant pair of ski goggles.

This device looks an awful lot like the Project Cambria headset we’ve been hearing about since late last year. We’ve known Meta was working on a new prototype, and famed leaker Ming Chi Kuo predicted the project was in the works this past April. Mark Gurman over at Bloomberg said he had reliable information that the headset would be called the Meta Quest Pro. This random hotel leak confirms both the physical build of the device and the name.

The device has three cameras on the front and an all-black cover over the front. The big update is to the controllers, which lose their sensor rings and look more akin to a Nintendo Wii paddle than what we’ve come to expect from a VR headset. They keep the same joystick and button arrays as those found on current Quest 1 and Quest 2 devices.

The leak is rather strange. The box had a sticker on the back that reads “Engineering Sample.” It’s convenient that Cardenas just happened to be the next person in the hotel room, rather than a cleaner or another guest, and that he also happened to be a gaming personality on Facebook, which is also owned by Meta. We’re not conspiracy theorists (much), but this is very convenient. Cardenas claims he has made arrangements to return the device to its original owner.

Meta CEO Mark Zuckerberg is expected to announce the next generation of Meta Quest devices, including the Meta Quest Pro, at the Connect conference on October 11, 2022. The event will be livestreamed on Facebook for anyone to watch.