The next big thing in science is already in your pocket 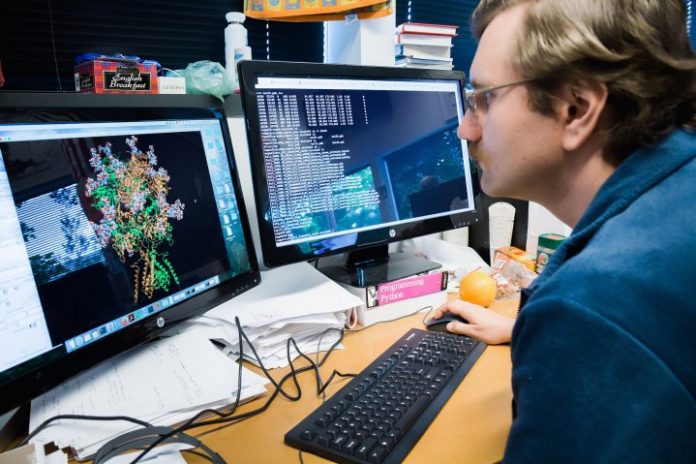 Supercomputers are an essential part of modern science. By crunching numbers and performing calculations that would take eons for us humans to complete by ourselves, they help us do things that would otherwise be impossible, like predicting hurricane flight paths, simulating nuclear disasters, or modeling how experimental drugs might effect human cells. But that computing power comes at a price — literally. Supercomputer-dependent research is notoriously expensive. It’s not uncommon for research institutions to pay upward of $1,000 for a single hour of supercomputer use, and sometimes more, depending on the hardware that’s required.

But lately, rather than relying on big, expensive supercomputers, more and more scientists are turning to a different method for their number-crunching needs: distributed supercomputing. You’ve probably heard of this before. Instead of relying on a single, centralized computer to perform a given task, this crowdsourced style of computing draws computational power from a distributed network of volunteers, typically by running special software on home PCs or smartphones. Individually, these volunteer computers aren’t particularly powerful, but if you string enough of them together, their collective power can easily eclipse that of any centralized supercomputer — and often for a fraction of the cost.

In the past few years these kinds of peer-to-peer computing projects have experienced something of a renaissance, and as the processing power of our devices continues to improve, it seems that the next big thing in science could be the smartphone in your pocket.

The birth and boom

The concept of volunteer computing has been around for decades, but it wasn’t until the late 1990s — when personal computers had made their way into a large number of U.S. households — that it really started to take off.

In 1999, researchers at UC Berkeley and Stanford launched two projects that gained considerable media coverage and widespread adoption: [email protected], which encouraged PC users to sign up and enlist their CPUs to analyze radio telescope data, and Folding[email protected], which used that computing power to fold complex proteins.

Both projects were massive hits with the public. [email protected] actually experienced such a huge burst of initial interest that it overwhelmed the project’s servers and caused frequent crashes. But after that breakout success, interest eventually leveled off, waned, and ultimately led the project’s creators to shut it down after 20 years.

[email protected] didn’t suffer the same fate, though. Around the time that the [email protected] project was winding down, [email protected]’s opportunity to shine appeared: the COVID-19 outbreak. Shortly after the pandemic hit, more than a million new volunteers joined the project, effectively creating what amounted to the world’s fastest supercomputer — one more powerful than the top 500 traditional supercomputers combined. Their job was simple yet instrumental in cracking some of the most complex diseases, including COVID-19: fold proteins.

Proteins are crucial to understanding how, for example, a virus reacts to and contaminates the human immune system. In their native state, proteins are in a folded shape, and they unfold to, for instance, bind and suppress our body’s defenses. To design therapeutics, scientists run simulations to look into a protein’s unfolding sequence — but it’s a ver resource-heavy and time-consuming process. That’s where [email protected] steps in. It not only dramatically cuts the cost but also accelerates the development by months and even years in a few cases.

Once [email protected] volunteers install a piece of software, their machines take upon a portion of a larger task and process them in the background. The results are dispatched back to the research group’s labs via the cloud, where they are collated and reviewed.

The results on several occasions have been groundbreaking. In 2021, scientists were able to discover why COVID-19’s variants were more devastating, thanks largely to [email protected]’s surge in computing power. In addition, it helped the development of a COVID-19 antiviral drug, which is now moving toward clinical trials. Beyond that, [email protected] has also facilitated a number of significant breakthroughs for other diseases, such as Alzheimer’s, Parkinson’s, and cancer.

Without crowdsourced computing, Dr. Gregory R. Bowman, [email protected]’s director and an associate professor at the Washington University School of Medicine, St. Louis, Missouri, says, “This work would have cost hundreds of millions of dollars on the cloud, making it economically infeasible for us or most anyone else.” He added, “The computing power is game-changing.”

A new kind of citizen science

Excitingly, projects like [email protected] aren’t the only way scientists are leveraging the power of smartphones. Sometimes raw computing power isn’t particularly important, and researchers simply need a broader spectrum of information — information only thousands of people spread across the globe can gather and deliver.

For example, in March this year, the European Space Agency launched its Camaliot campaign, which seeks to improve weather apps by creatively leveraging the GPS receiver inside people’s Android phones. You see, whenever your phone pings satellites for navigation, they respond with the time and their location, and phones calculate where they are based on how long each message took to arrive. The time each signal takes can better inform scientists of the atmosphere’s properties, like the amount of water vapor in it, which in turn can help predict more accurate rain forecasts. But, the ESA team can perform this activity from only so many locations.

The Camaliot app allows Android phone owners from around the world to contribute to ESA’s project. It repeatedly pings satellites from people’s phones and sends the response data it collects back to the ESA base.

With Camaliot, ESA hopes to gather data from areas like Africa, of high interest from an ionospheric point of view and which are not well covered by the agency’s geospatial-limited centralized methods, Vicente Navarro, the Directorate of Science at the European Space Agency and lead on the Camaliot campaign, told Digital Trends.

But the question remains: Why would anyone loan out their device’s power for free? In addition to elevated electricity bills, this also affects the performance and health of your phones and computers. But even with those downsides, for many like Jeffrey Brice, a sound designer who’s been folding proteins since 2007, the answer is rather simple: to do good.

“I was interested in cryptocurrency for a while,” Brice said, “but using the same hardware for [email protected] seemed like a better, more ethical, and more philanthropic use of the equipment.”

For others, it’s a source of passive income. To encourage participation, some leading [email protected] groups have set up donation-led crypto communities, which distribute currencies like Dogecoin every week depending on contributions. Camaliot, similarly, rewards its top contributors with vouchers.

With computer chips making their way into just about everything, Josh Smith, the founder of CureCoin, a cryptocurrency for rewarding [email protected] volunteers, anticipates an even brighter future for crowdsourced science projects. “If we achieve our lofty capacity goals, the ripple effect for the future of our planet will be something that is never forgotten,” he said.

Facebook
Twitter
Pinterest
WhatsApp
Previous articleLenovo Slim 9i review: glass on top, quality underneath
Next articleThe next big thing in science is already in your pocket
- Advertisment -