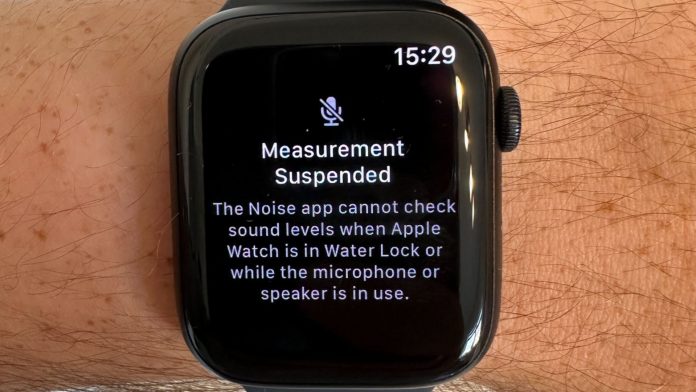 A growing number of user reports online suggest the microphone on some new Apple Watch Series 8 and Ultra models can become persistently unresponsive after an unspecified amount of time, causing apps that rely on the mic to throw up errors and stop working.

Photo shared by MacRumors forum member 2259 depicting the issue
Users have taken to the MacRumors forums and the Apple Support Community forums to relate the issue, which results in the following error notification from the Noise app, and also prevents system functions including Siri, Dictation, and Handwashing detection from working:

Measurement Suspended
The Noise app cannot check sound levels when Apple Watch is in Water Lock or while the microphone or speaker is in use.

Based on reports, the issue can be temporarily resolved by restarting the Apple Watch until the bug eventually manifests itself again, suggesting the problem is software-related rather than a hardware defect.

Updating affected Ultra watches to the latest post-release version of watchOS 9 doesn’t fix the issue, which Apple is apparently aware of. The company has been replacing new models under warranty, presumably until it patches the bug in a forthcoming software update. We’ll update this article if we learn more.