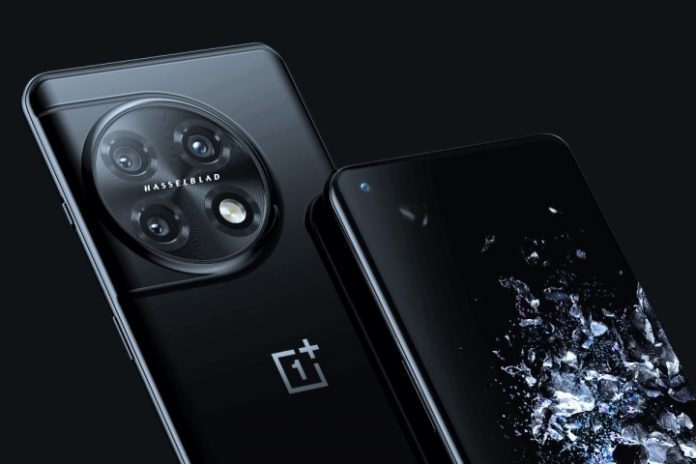 OnePlus is apparently having a hard time putting a lid on leaks exposing its upcoming flagship. Days after rumored 3D schematic renders of the OnePlus 11 Pro popped up online, leaker OnLeaks (via 91Mobiles) has shed some light on the OnePlus 11 Pro’s core specifications. It’s a usual flagship affair from top to bottom, but there are a few interesting bits to unpack.

Starting with the subtly curved display, it’s a 6.7-inch OLED screen with QHD+ (roughly 3216 x 1440 pixels) resolution. There’s a circular cutout in the corner, while the screen refresh rate is 120Hz. Overall, things look identical compared to the OnePlus 10 Pro.

Qualcomm’s upcoming Snapdragon 8 Gen 2 chipset, which is expected to be announced in December, will be powering the OnePlus 11 Pro. It appears that the phone will be sold in two configurations: one that pairs 8GB of RAM with 128GB of storage, and an overkill version with 16GB of RAM and 256GB of storage.

What on Earth is that zoom camera?

The camera is quite interesting, and a tad disheartening, too. The main camera employs a 50-megapixel sensor, and if the OnePlus 10 Pro is anything to go by, it is going to deliver impressive results with all that Hasselblad tuning in tow. To handle ultrawide photography, OnePlus is going with a generous 48MP sensor.

For the telephoto zoom camera, OnePlus is reportedly deploying a 32MP camera, up from the 8MP camera we got on the OnePlus 10 Pro. The optical zoom output is reportedly going to be 2x, which is a weird downgrade compared to the 3.3x output on its predecessor.

It appears that OnePlus is focusing on the final image quality by cramming 4x more pixels in the zoom shots, instead of delivering a blurry, magnified mess. It would be interesting to see how the digital cropping pans out, and whether pixel-binning will be thrown into the mix to deliver brighter shots with more color depth.

The approach sounds novel, theoretically, that is. However, it is also antithetical to the very purpose of telephoto cameras, which should ideally focus on offering the highest optical zoom output to capture far-out objects without much digital loss. Take, for example, Samsung Galaxy S22 Ultra, which goes up to 10x optical zoom with its telephoto camera and delivers surprising shots.

One reason, in particular, that the OnePlus 11 Pro’s telephoto camera hardware appears to be holding back is the innate hardware. The company is still sticking to the usual smartphone zoom formula with moving lens elements placed right in front of the sensor, instead of the newer and more powerful folded lens system that we know as a periscope zoom type.

The core design of a periscope telephoto camera seen on the likes of the Samsung Galaxy S22 Ultra.

Huawei first popularized the tech which is easily identifiable by a rectangular lens element instead of the usual circular look of the camera lens. Samsung has delivered great results ever since the tech first arrived on the Galaxy S20 Ultra, and other Chinese brands soon followed suit. OnePlus, for some reason, is missing the train, yet again.

At least it charges wickedly fast

While the zoom camera setup seems curiously disheartening, the charging situation is still miles ahead of the competitors in the U.S. market. The OnePlus 11 Pro will reportedly offer a 5,000mAh battery that supports 100W wired fast charging.

That’s four times faster than the peak charging rate attainable with an iPhone 14 Pro, and about three times as quick as mainstream Samsung and Google flagships. For comparison, the OnePlus 10 Pro maxed out at 80W, enough to fill the tank in just about 30 minutes.

Assuming OnePlus doesn’t make any downgrades in the wireless charging department, the OnePlus 11 Pro will also offer 50W wireless charging, or even higher. At that peak output, the upcoming phone’s 5,000mAh Li-ion unit should take around 45-50 minutes to go from empty to 100%. The OnePlus 11 Pro is expected to go official in the first quarter of 2023, but an official announcement is still awaited.