HomeNewsNvidia GTC 2022: RTX 4090, DLSS 3, and everything else announced
News 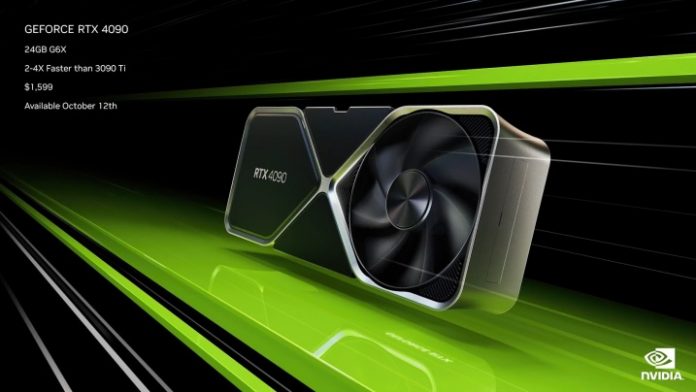 Nvidia’s GTC (GPU Technology Conference) event has just ended, and the keynote was packed to the brim with news. The new RTX 40-series graphics cards were obviously the standout announcements, kicking off an entirely new generation of graphics cards for PC gamers.

But as per usual, Nvidia’s announcement went far beyond consumer gaming, touching industries ranging from new products in the world of robotics and self-driving cars to advancements in the fields of medicine and science.

The big announcement that kicked off the keynote, of course, was three new graphics cards. The RTX 4090 is the flagship model, of course, which Nvidia says is up to 2x faster than the previous generation (RTX 3090 Ti) in traditional rasterized games. This massive card is based on Ada Lovelace, of course, which is the foundation of everything announced at GTC. It comes with 16,384 CUDA cores and 24GB of GDDR6X memory. And, most notably, the same 450 watts of power as the RTX 3090 Ti.

These GPUs are a bit more manageable, with 320w or 285w, respectively. The RTX 4090 has well over twice the CUDA cores as the RTX 4090 12GB model, however, which is a massive gap. There’s a big different in specs between these two models of RTX 4080, so it’ll be interesting to see how they stack up in terms of performance.

Along with the new GPUs, Nvidia also announced the third generation of RTX, which includes DLSS 3. Just like stepping up from DLSS to the second generation, this appears to be a substantial evolution of the technology. This time, the machine learning can predict actual frames, not just pixels, resulting in an even larger boost to frame rates in games.

How fast? Well, Nvidia says up to four times as fast, thanks to the optical flow accelerator. This tech actually bundles three different Nvidia innovations into one, including DLSS Super Resolution, DLSS Frame Generation, and Nvidia Reflex.

The other big feature of DLSS 3 is its ability to boost CPU-limited games. Nvidia showed a demo of Microsoft Flight Simulator, which fits the bill in an extreme way. Seeing DLSS 3 boost frame rates from 64 fps to 135 fps is seriously impressive, especially on this type of game.

Nvidia says DLSS 3 will be four times faster than conventional rendering, all in all. DLSS 3 comes out in October, and Nvidia says more than 35 games and applications will support it at launch.

Nvidia has been trying to get its foot in the door for the future of self-driving car for years, but its latest product feels like a significant step in the right direction. Nvidia Drive Thor is its next-generation superchip, based on the Hopper GPU architecture, paired with the Nvidia Grace CPU.

Drive Thor is the first automative platform to have an inference transformer engine.

Nvidia says Drive Thor will be available for automakers’ 2025 car models as the true successor to Drive Orin, which is currently in production. Thor takes the place of Drive Atlan, which had been announced just last year.

In addition to the new chip, Nvidia also showed off Drive Concierge, a complete in-vehicle infotainment system. It replaces the instrument cluster on typical car dashboard with what Nvidia calls a “digital cockpit.” The system supports Android Automotive, which allows systems to be customized by automakers. Notably, the announcement comes just a few months after Apple’s landmark next-generation CarPlay announcement, which does a similar with its digital instrument cluster.

Of course, the entirety of the design was created in Omniverse, and Nvidia says designing in Omniverse allows carmarkers to tweak all these aspects of the car long before they’re a physical reality.

Omniverse Cloud was announced earlier this year as Nvidia’s complete suite of cloud services for people building out the future of the metaverse — without the need for all that performance in your actual computer. New additions to the suite of services include the robotics simulation application, Nvidia Isaac Sim, as well as the autonomous vehicle simulation, Nvidia Drive Sim.

Interestingly, Omniverse Cloud was mentioned alongside something called the Nvidia Graphics Delivery Network (GDN), which is the distributed data center powering Omniverse Cloud. Built on the same capabilities as GeForce Now, the company’s cloud gaming service, the GDN is the network delivering all this high-performance, low latency graphics to anyone who needs it.

Nvidia spoke at length about all the ways Omniverse and digital twins are being used, even stating that every product in the future controlled by software, must have a digital twin for testing purposes.

Nvidia announced the Jetson Orin Nano modules, the latest addition to the Jetson family of small computers built for accelerating AI processes and robotics. These new “system-on-modules” claim to bring up to 40 trillion operations per second (TOPS) of AI performance, 80 times the performance over its predecessor the Orin NX modules.

The Orin Nano modules will be available starting in January, with the 8GB model starting at $199.

Facebook
Twitter
Pinterest
WhatsApp
Previous articleThe Windows 11 2022 update is what we should have seen from the start
Next articleNvidia RTX 4080 vs. RTX 3080: Is Ada Lovelace worth it?