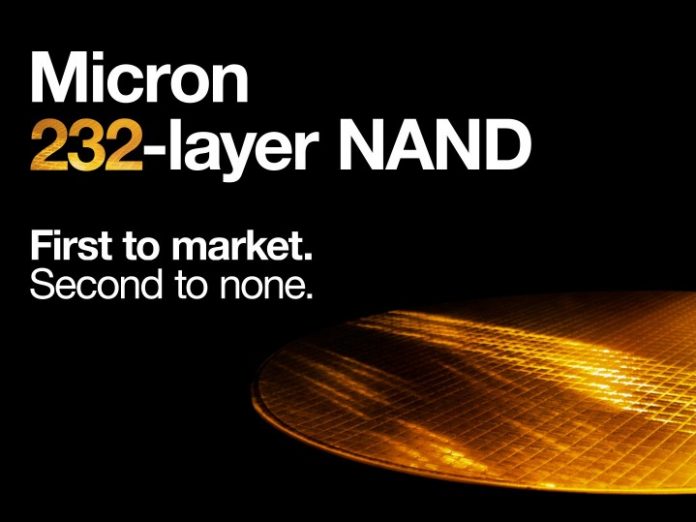 In the wide world of computing, sometimes there’s innovation you can see — like a processor that’s larger than others with increased capabilities, or a super thin laptop chassis with a powerful machine housed inside — and sometimes there’s innovation you cannot see. For the latter, that innovation tends to be happening inside the core of another piece of technology. Take solid-state drives, for example, which have grown increasingly thinner, albeit with larger storage capacities, and unprecedented read and write speeds. It’s the technology inside of those drives that’s the real achievement. It makes for an excellent experience all around as computers are growing faster and more powerful every day. That’s exactly what’s happening with Micron’s latest achievement: a 232-layer 3D NAND, which is in essence nothing more than a wafer. The sheer possibilities that this new technology will provide are enormous.

While Micron isn’t ready to disclose where this technology will be featured just yet, the important part is that this multilayer advancement sets the foundation for a new wave of end-to-end technology innovation, particularly when it comes to storage capabilities. Delivering incredible storage density, enhanced performance, and industry-leading I/O speeds is just the start. The 232-layer 3D NAND will unlock entirely new possibilities for digitization, performance optimization, and general automation in client, mobile, and data-center-related markets. In other words, it offers increased storage density for higher capacities — much higher — right along with high performance, and a host of ubiquitous applications.

To offer the shortest possible explanation, this technology is modern storage redefined. 3D NAND saw the beginning of the “build up, not build-out” approach which involved stacking layers of interconnected circuitry to build semiconductors, instead of continually increasing the total area. Micron set the bar in 2020 with its amazing 176-layer NAND technologies. Now, Micron has raised that bar, scaling the design to 232 remarkably dense layers, keeping each chip on the wafer incredibly small. We are talking about skyscraper-like stacking, but at a microscopic level! Let’s break it down in a little more detail:

Best-in-class performance: The 232-layer NAND features the industry’s fastest I/O speed at 2.4 gigabytes per second (GBps). Yes, gigabytes. This unprecedented performance is also complemented by the low latency and high throughput that is crucial for data-centric workloads seen in AI, cloud computing, and real-time analytics. It can vastly improve performance for all of these applications, not just traditional storage usage.

Incredible data density: Hard drives store data on platters, and solid-state drives store data in NAND chips. There is a high value in being able to store as much data as possible in each drive or SSD — which underpins the desire for higher density storage — cramming more bits in the smallest possible physical space. Micron’s NAND is the world’s densest TLC chip, meaning it has the highest storage bit density per square millimeter of chip area ever produced, at 14.6GB/mm². It achieves this while still allowing customers suitable design flexibility, in terms of configuration and installation. To put it into easily parsable numbers, the areal density of the 232-layer NAND is up to 100% denser than competing TLC products — allowing for much higher capacity drive solutions.

Greater storage capacity: While SSDs offer incredible read and write performance, one of the historical drawbacks of modern solid-state drives is that the total capacity is often lower than the max capacities of the largest mechanical hard drives. The 232-layer NAND enables greater storage capacities, with the possibility of up to 1 terabit per die, and 2 terabytes per package. By offering more capacity with each package within the SSD—which often contain many of these tiny packages, it elevates the total capacity of the drive. The result will be more storage, with smarter, more functional devices, across the entire industry — from personal computing to the cloud.

What does it mean to the layman?

If you don’t follow the industry closely, you may be lost in some of these numbers and feature listings, but the gist is that storage drives are about to get a whole lot more capable — not just in terms of storage capacity but also in performance, optimization, and general design. It’s the type of innovation you probably won’t see with the naked eye because a lot of it is going to be happening inside the core of other technologies — particularly inside a storage drive. That said, you will certainly feel the performance boost when it’s made available.

The faster read and write speeds — thanks to I/O boosts — will net you speedier loading times, better general performance, and just a more capable machine all-around, whether you’re talking about the latest smartphone, a laptop, or custom-built PC.

What does it mean to manufacturers?

We won’t tell you how to do your job, and probably can’t — let’s be honest. However, this technology enables new opportunities for innovation, whether it’s going to be used for personal computing, edge computing, or cloud computing applications. Thanks to Micron’s 232-layer NAND, customers, investors, and partners will soon be able to experience next-generation storage capabilities that realize cutting-edge improvements to density, capacity, performance, and even power efficiency.

The initial products have begun shipping, with more details to follow. Additional 232-layer NAND-based products will launch later in 2022 and 2023. We can all look forward to the enhancements Micron’s 232-layer 3D NAND will provide, especially since their current-generation 176-layer NAND architecture is already impressive.

Facebook
Twitter
Pinterest
WhatsApp
Previous articleIntel adds $400 worth of goodies to Arc Alchemist, but there’s a catch
Next articleDell’s XPS 13 MacBook Pro rival is $550 off for a limited time