HomeNewsIntel Unison is yet another attempt to make PCs and phones work...
News 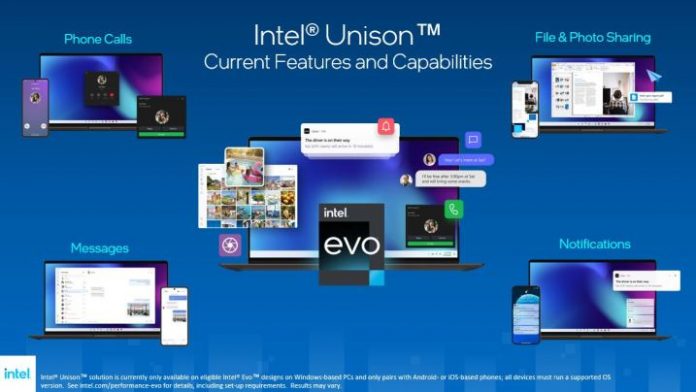 Intel Unison isn’t just a way to get an advantage over AMD, either; it’s also a major attempt toward bridging the gap between Windows PCs and what Apple is doing on Macs.

There are apps on for Windows PCs that try to connect your computer to your phone. Your Phone, a first-party app, allows users to text and call from their PC, but that’s about it — and it’s not a particularly amazing texting-on-your-PC app anyways. Meanwhile, companies like Dell have proprietary solutions, which confuse things even further — and often have limitations with iPhones.

Intel Unison is a far more ambitious piece of software than Your Phone and promises to include many features that rival what’s available on Apple hardware, including:

Regarding those first two points, Intel PCs that support Intel Unison might be on par with Apple hardware for the first time ever. In fact, Intel Unison will have one key advantage Apple devices don’t have: remote control. There are third-party apps Apple users can use to control a MacBook with an iPhone, but it’s not a feature supported directly by Apple.

Intel Unison’s remote control feature sounds promising since it has the backing of a multibillion dollar company that is one of Microsoft’s biggest partners.

The disappointing part about Intel Unison is the support. It will only be available for “select Intel Evo” PCs that use 12th-gen CPUs. It’s not something just anyone can install and use on any computer. Intel does promise it will be available on more Intel Evo machines that use upcoming 13th Gen CPUs, but that still leaves older machines out of the loop. It’s easy to understand why Intel wouldn’t want its software being run on AMD machines, but it’s unfortunate that it won’t be supported on all Intel machines.

As for software, only PCs running Windows 11 with the 22H2 update will be supported, which provides further limitations for compatibility. As for phones, you’ll either need to update to iOS 15 if you have an iPhone or Android 9 if you have an Android phone. Luckily, iOS 15 has pretty broad support and Android 9 came out four years ago, so it’s unlikely you’ll have any software incompatibility problems, which is a saving grace for Intel Unison.