HomeNewsIntel 13th-gen Raptor Lake arrives just in time to hit back at...
News 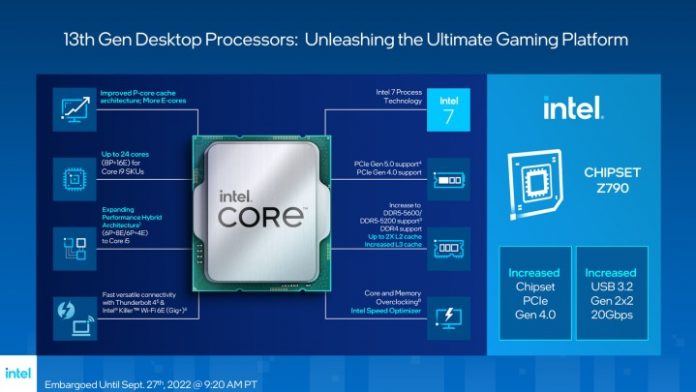 Intel today revealed its 13th-gen Raptor Lake processors during its Innovation 2022 event, heating up the already hot battle between AMD and Intel. Although these new chips share a lot with the previous generation under the hood, Intel is promising more cores, higher clock speeds, and performance that will catapult 13th-gen chips to the top of the best CPU rankings.

Before digging in, here’s a quick look at specs for the three Raptor Lake processors coming. Some specs are official, while others have been compiled from specs posted by Intel a couple of weeks back (though not confirmed).

Perhaps the biggest change this generation is double the E-cores on each of Intel’s newly announced processors. Like the previous generation, Raptor Lake uses a hybrid architecture that mixes performance (P) cores and efficient (E) cores. Although the new chips don’t come with more P-cores, the extra E-cores boost the overall count.

Cores aren’t the only trick Intel has up its sleeve, though. Clock speeds are also up across the board, including a massive 600MHz boost to the Core i9-13900K. Although it’s still below the 6GHz mark, Intel says the new chips come with similar overclocking headroom as the previous generation, and it even showcased the P-cores passing 8GHz with an LN2 extreme overclocking demo.

Compared to AMD’s Ryzen 9 5950X, Intel says the Core i9-13900K provides up to a 58% boost in gaming performance in Marvel’s Spider-Man. Other titles don’t see as much of a boost, but the results are still promising. Intel touted a 31% boost in Far Cry 6, for example, and a 19% jump in Total War Warhammer 3.

Content-creation workloads see a larger jump, with a 69% boost in Auto Desk Revit over the Ryzen 9 5950X, as well as a 34% increase in PugetBench for After Effects. Gen-on-gen, Intel says the Core i9-13900K is 27% faster at rendering in Adobe Media Encoder and Photoshop over the Core i9-12900K, and 34% faster in Blender and Unreal Engine.

Although the gains are impressive, we’ll have to see how Intel’s latest chips hold up to AMD’s newly released Ryzen 9 7950X. Going into the next generation, it’s a battle between Intel Raptor Lake and AMD’s Ryzen 7000. Intel certainly has the specs to compete, with boosted core counts and clock speeds, as well as additional cache to keep up with chips like the Ryzen 7 5800X3D.

A point in Intel’s favor is that pricing remains the same as the previous generation, with the flagship coming in at $590. That’s $110 less than AMD’s current flagship, but we’ll have to wait a few weeks after the launch dust settles to see where prices end up. Intel’s Raptor Lake processors, along with Z790 motherboards, will hit store shelves on October 20.