HomeNewsI have a confession — I may have been wrong about the Apple...
News 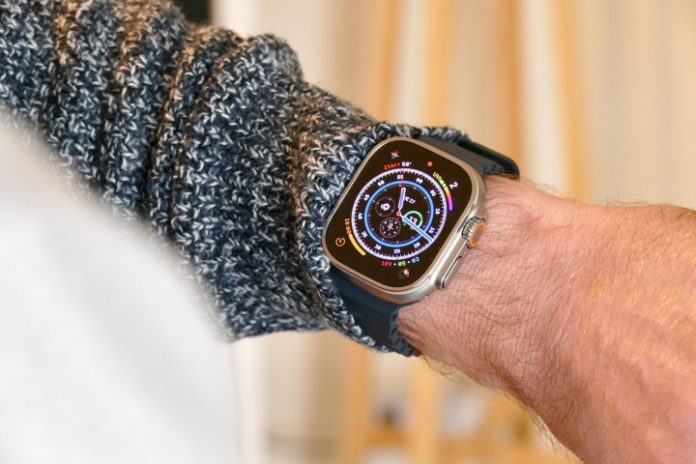 I’ve been wearing the Apple Watch Ultra for a few days, and I haven’t been near a mountain, a desolate trail, or deep under the water. When I first saw the Watch Ultra, I pondered that you may have to do these things in order to then casually wear the smartwatch without looking a bit silly. Now that the Watch Ultra is on my wrist, I think I may have been wrong about it. After all, even Indiana Jones had to spend time in the classroom. Here’s what has started to change my mind.

It’s not big if you’re used to big watches

The size of the Apple Watch Ultra has been one of the major talking points since its announcement. The official dimensions put it at 49mm tall, 44mm wide, and 14.4mm thick — while the largest Apple Watch Series 8 is 44mm tall, 38mm wide, and 10.7mm thick. The Series 8 is also half the weight at 32 grams compared to the Ultra’s 61 grams. Is it unmanageable? An inconveniently big and heavy piece of tech strapped to your wrist?

The answer depends on where you’re coming from. If you’ve worn almost any Casio G-Shock watch recently, the Apple Watch Ultra won’t feel that big at all. Next to my G-Shock MTG-B1000, it looks about the same size. It actually looks a little smaller next to the GA-735, and even smaller again next to the GR-B200 Gravitymaster. For reference, the Gravitymaster’s dimensions are 63mm tall, 54mm wide, and 18mm thick. That’s a big watch. Divers probably won’t find it too big either, as it takes up a similar amount of space on my wrist as the Seiko SBBN033 Marinemaster diver’s watch with its 47mm case.

What if you wear something more modest? Next to the 39mm Seiko Speedtimer, the Watch Ultra’s size is obvious, but if you look at the full lug-to-lug size of the Speedtimer and the total size of the Watch Ultra, there isn’t that much between them again. It’s the shape and screen that gives the Watch Ultra authority on your wrist, and I think more people will be able to carry the look than perhaps expected. 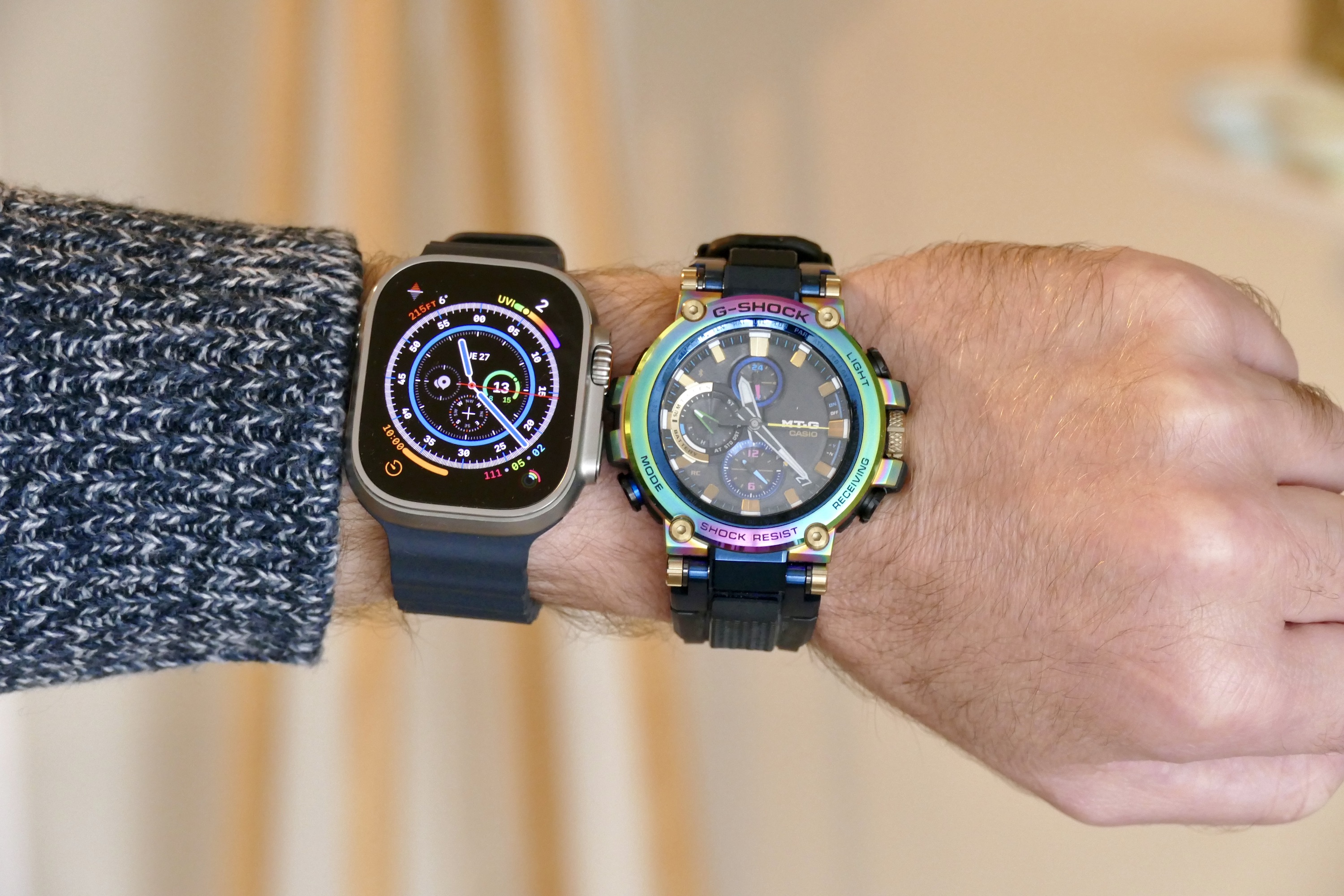 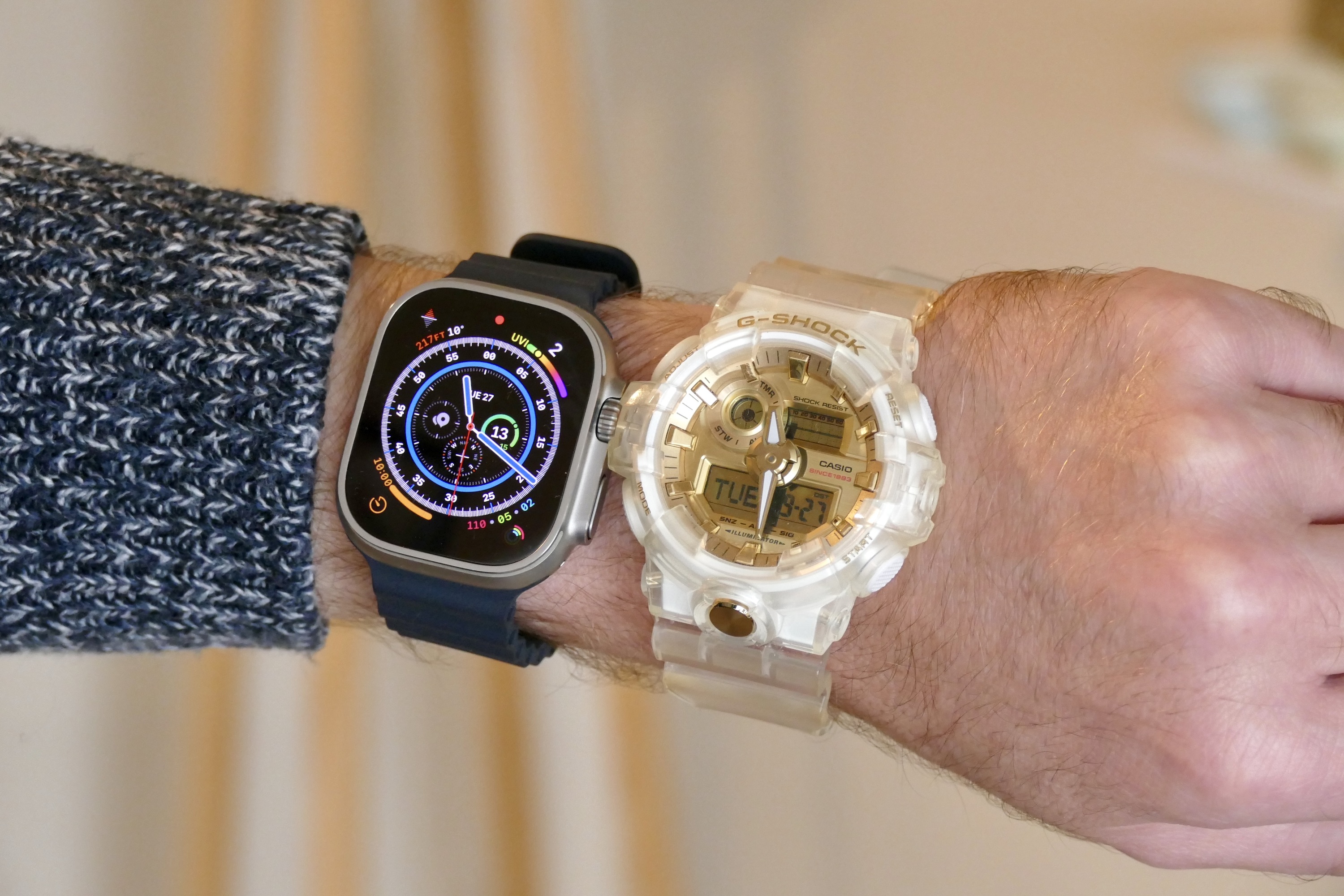 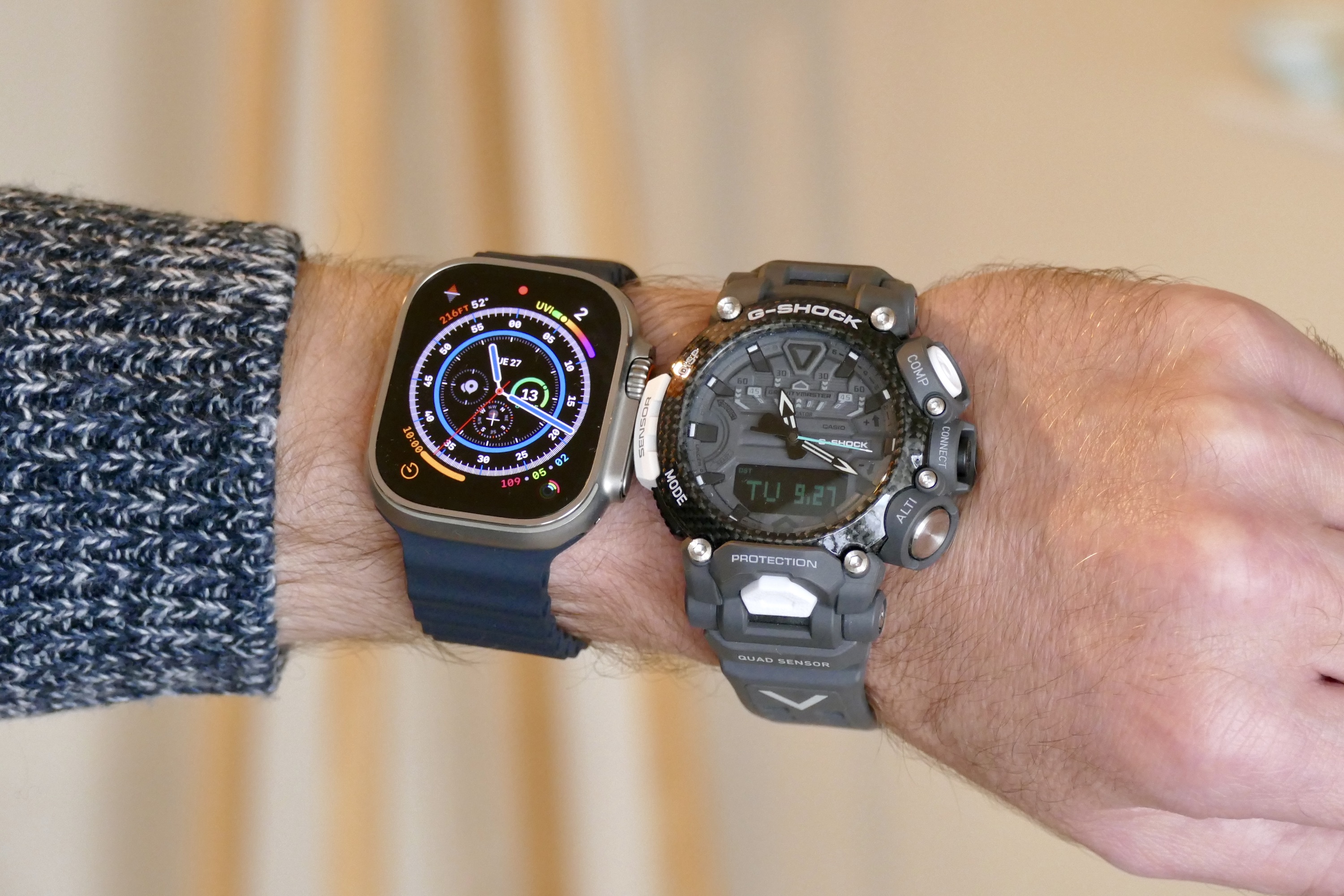 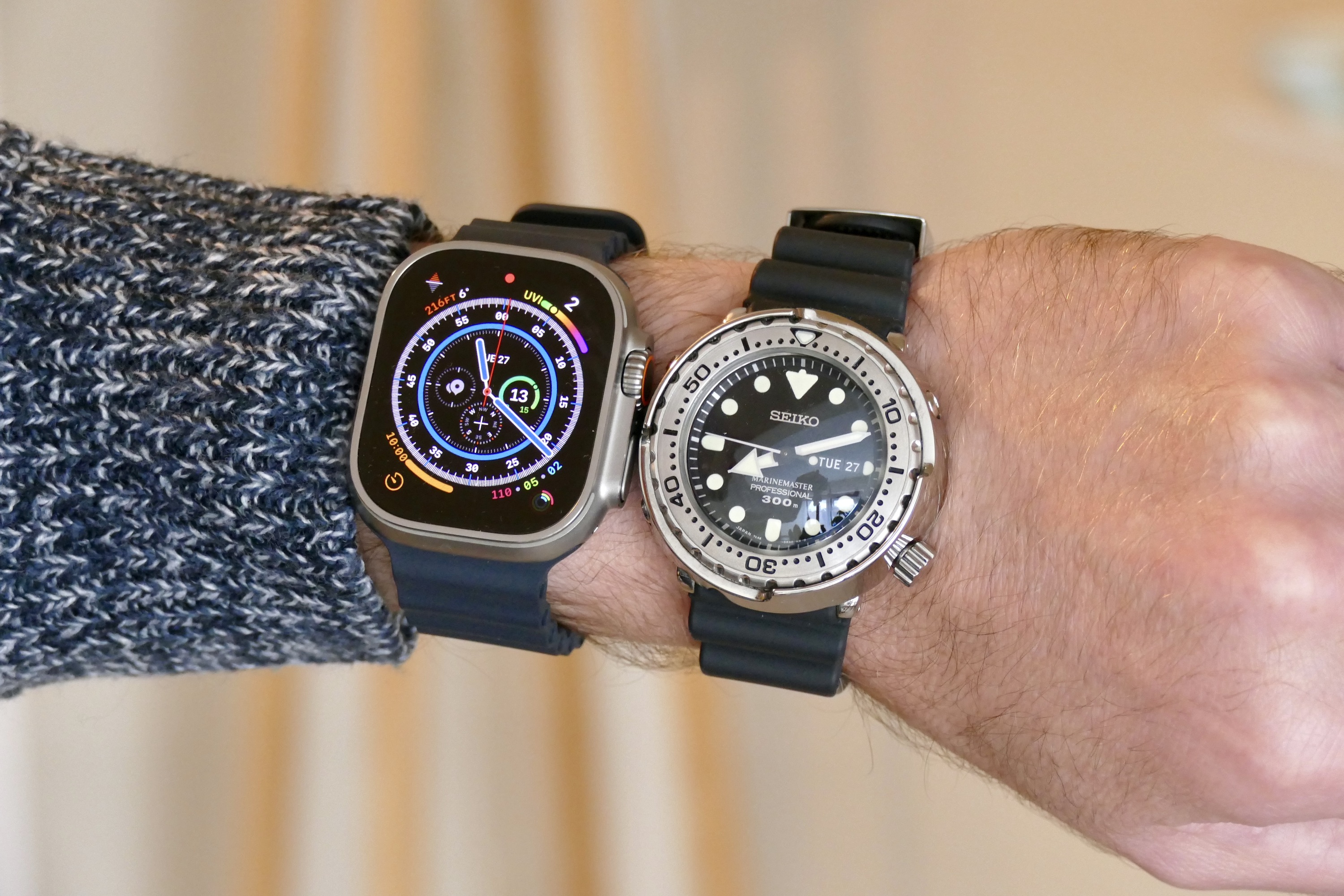 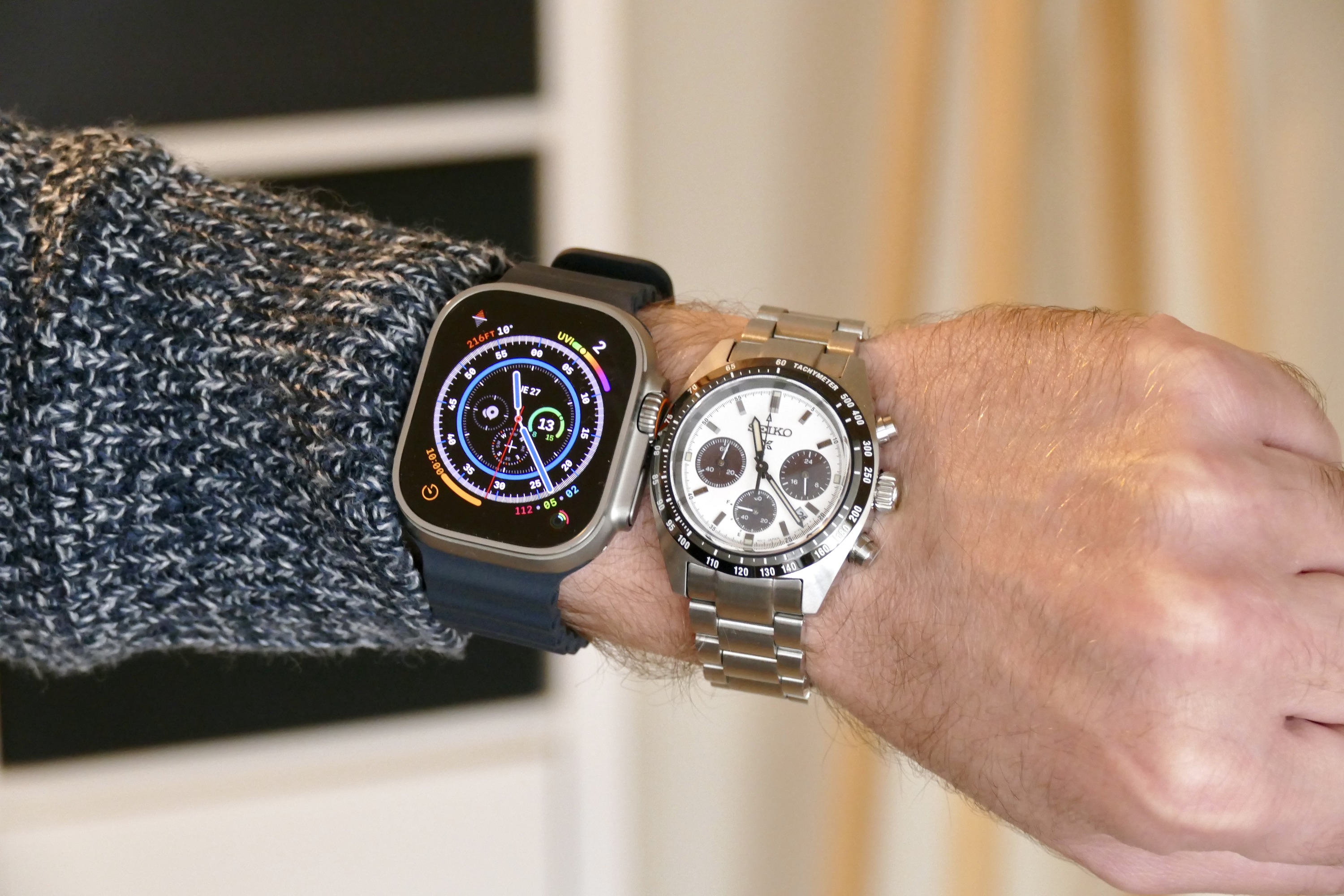 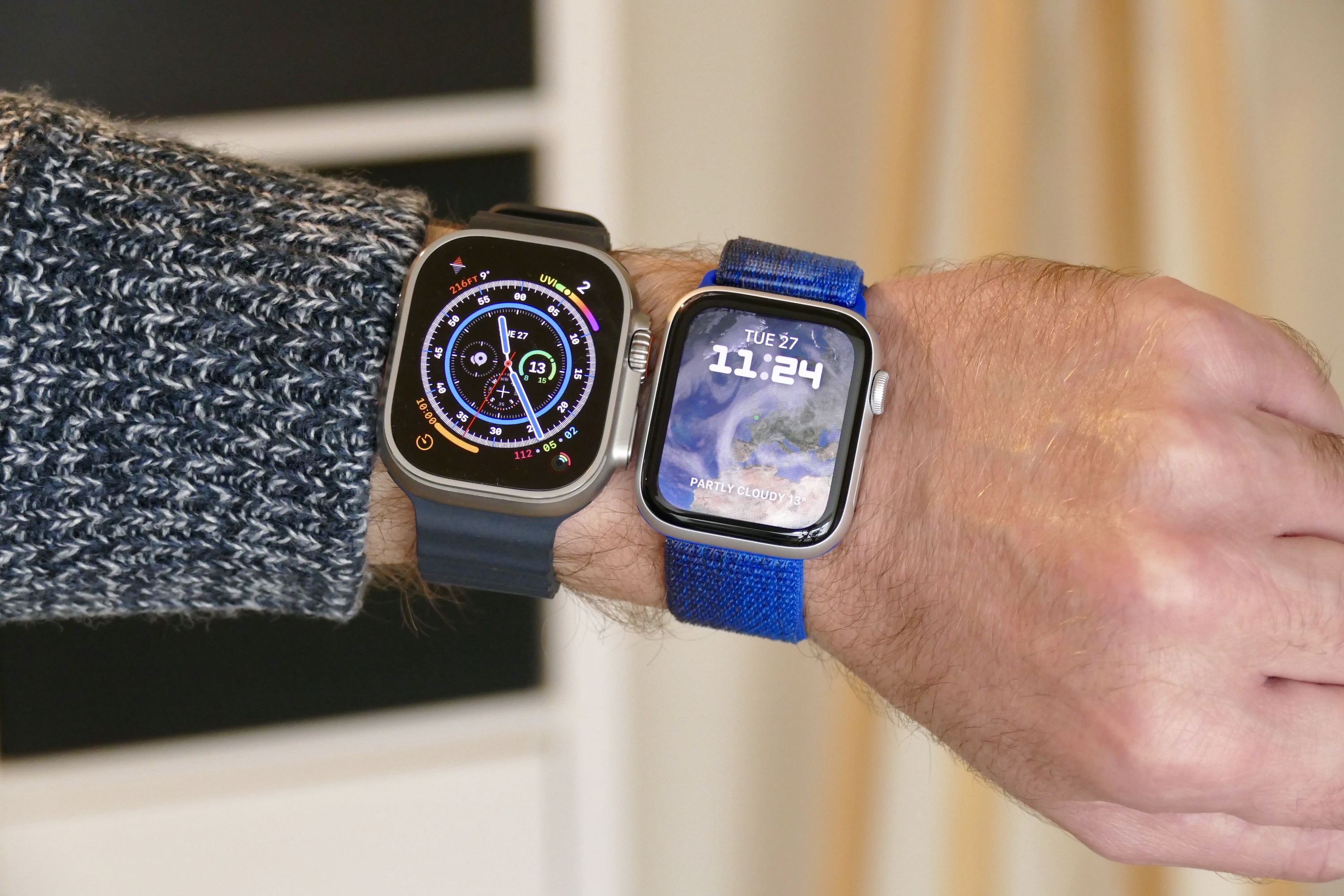 Putting it next to the Apple Watch SE 2 was also interesting. The sleek, stylish, and now classic design of the Series 8 and SE 2 is so much softer and more delicate to look at, and nowhere near as commanding as the Ultra. But again, there’s not really a massive difference in overall size. I’m not saying the Watch Ultra will suit everyone (it definitely won’t), but I am saying you shouldn’t immediately dismiss it just because the general consensus is it’s a “big watch.”

It’s all relative, and comparing it to other big watches should give you an idea if you’ll be able to carry the look on a daily basis or not. I’m wearing all the watches in the photos, and for reference, my wrist measures 6.5-inches. I wasn’t sure about the design of the Watch Ultra at first, but it has grown on me since I started wearing it. There’s an all-purpose, no-nonsense style to it that’s cool, and paired with the Wayfinder watch face’s Night mode, it takes on a cool sci-fi, industrial vibe to it that I really like.

Too heavy for sleep tracking

Wearing the Apple Watch Ultra during the day, whether you’re out exploring the wilderness or not, is manageable. The only annoyance I’ve found is the strap gets caught on the edge of my laptop when I’m typing, and avoiding it is hard as I also find it uncomfortable to rest on top of the case. This isn’t unique to the Apple Watch Ultra, and it happens with many solid watch straps. I’m wearing the Watch Ultra with the elastomer Ocean Band. It’s very comfortable, but not very forgiving, and quite thick. 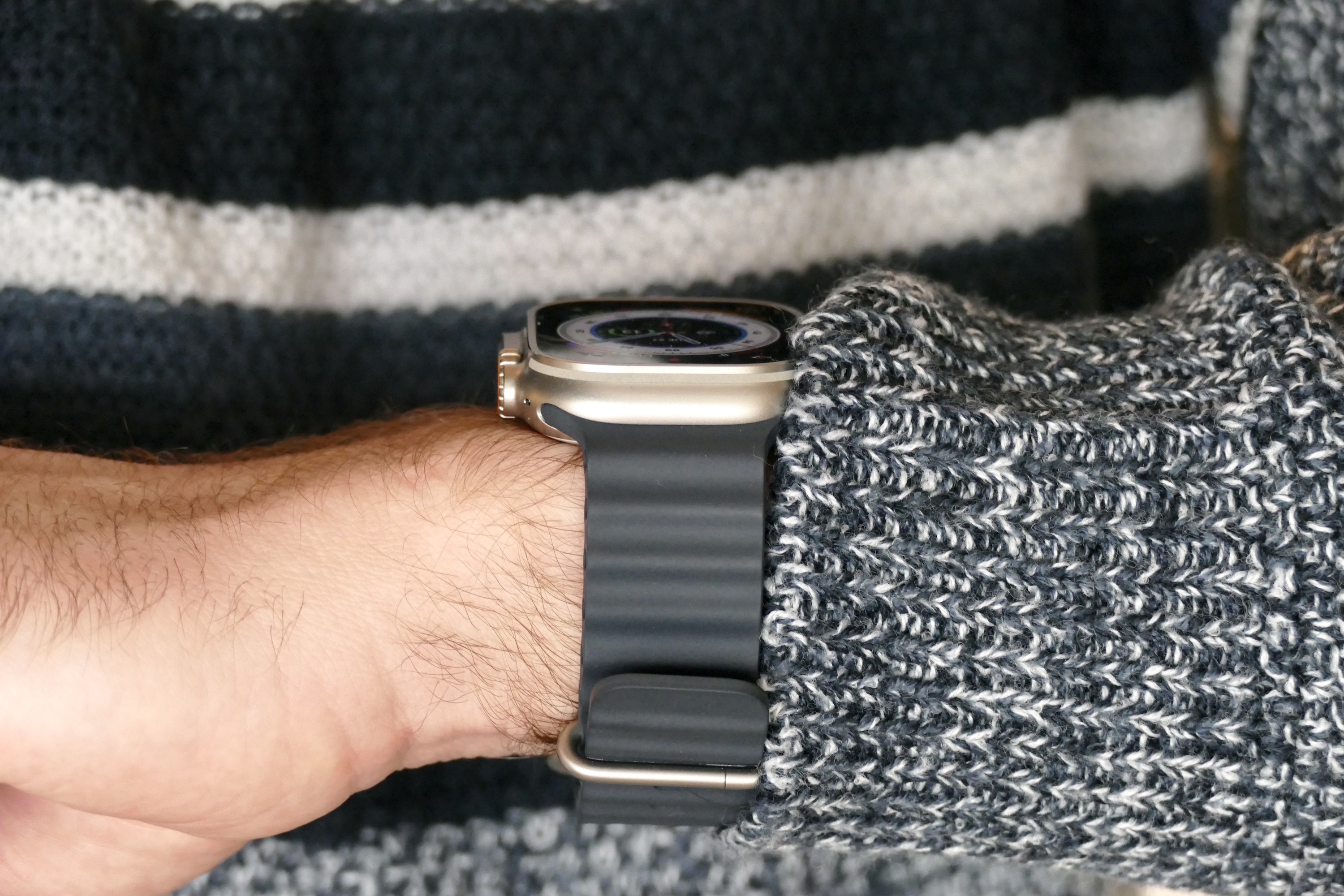 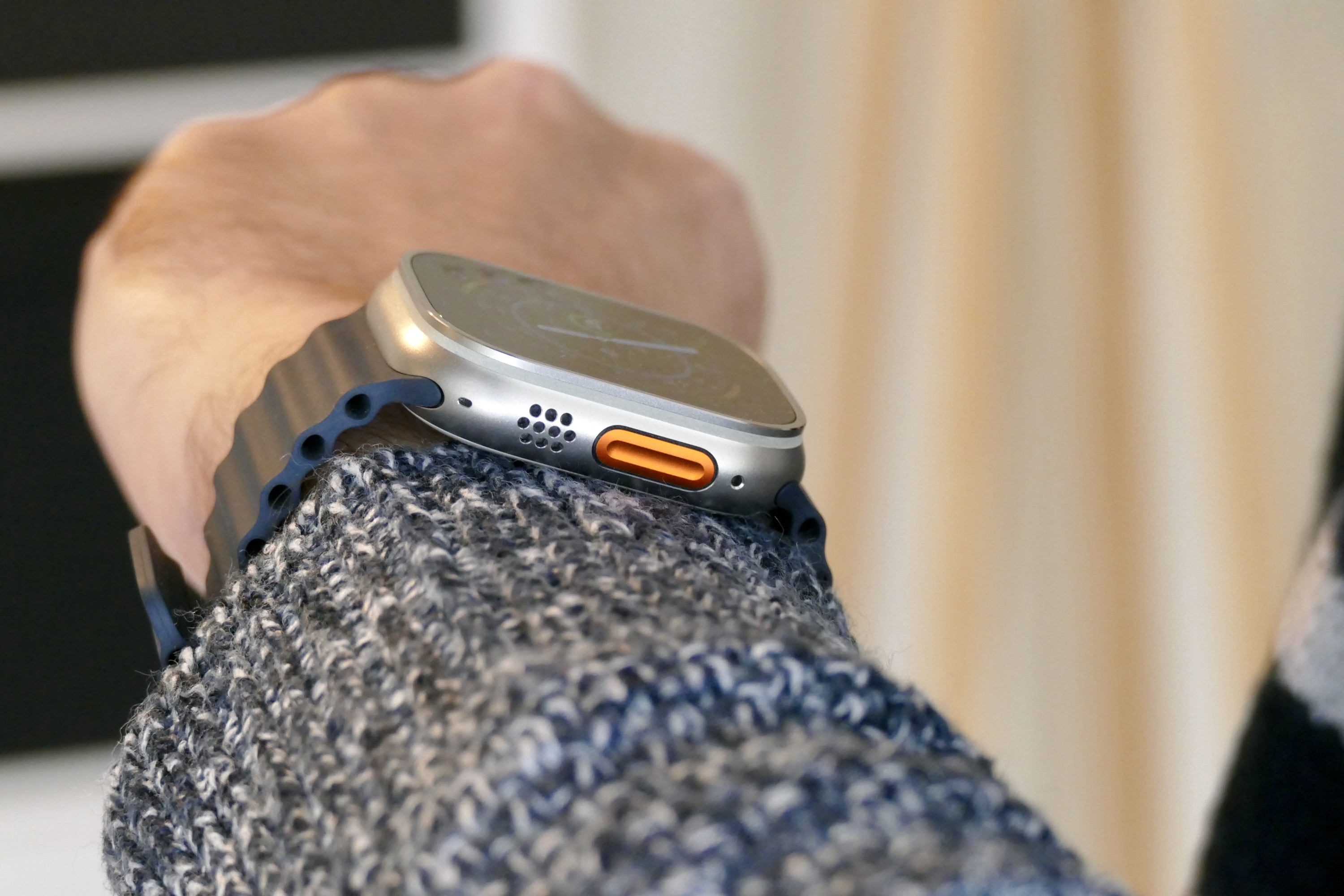 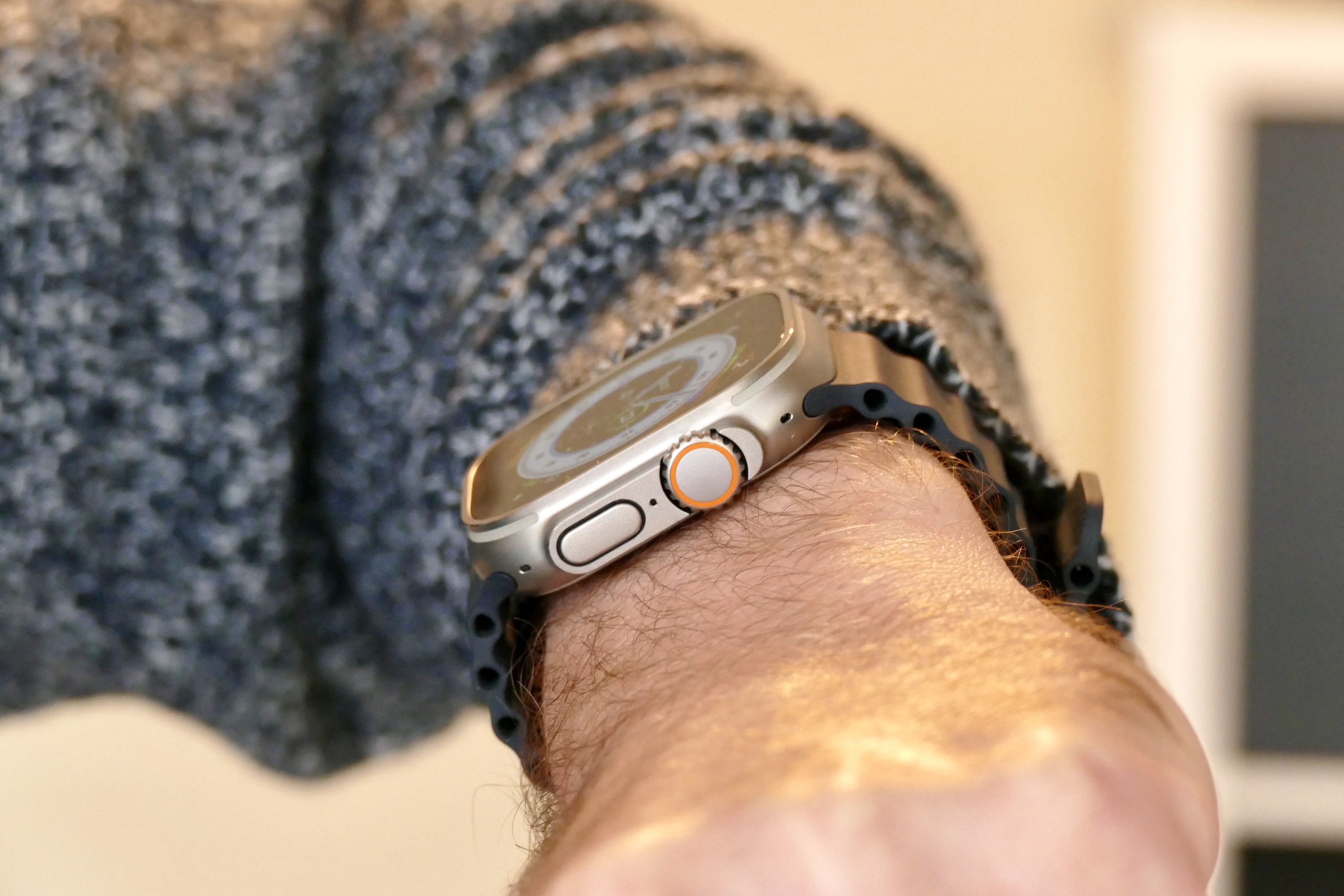 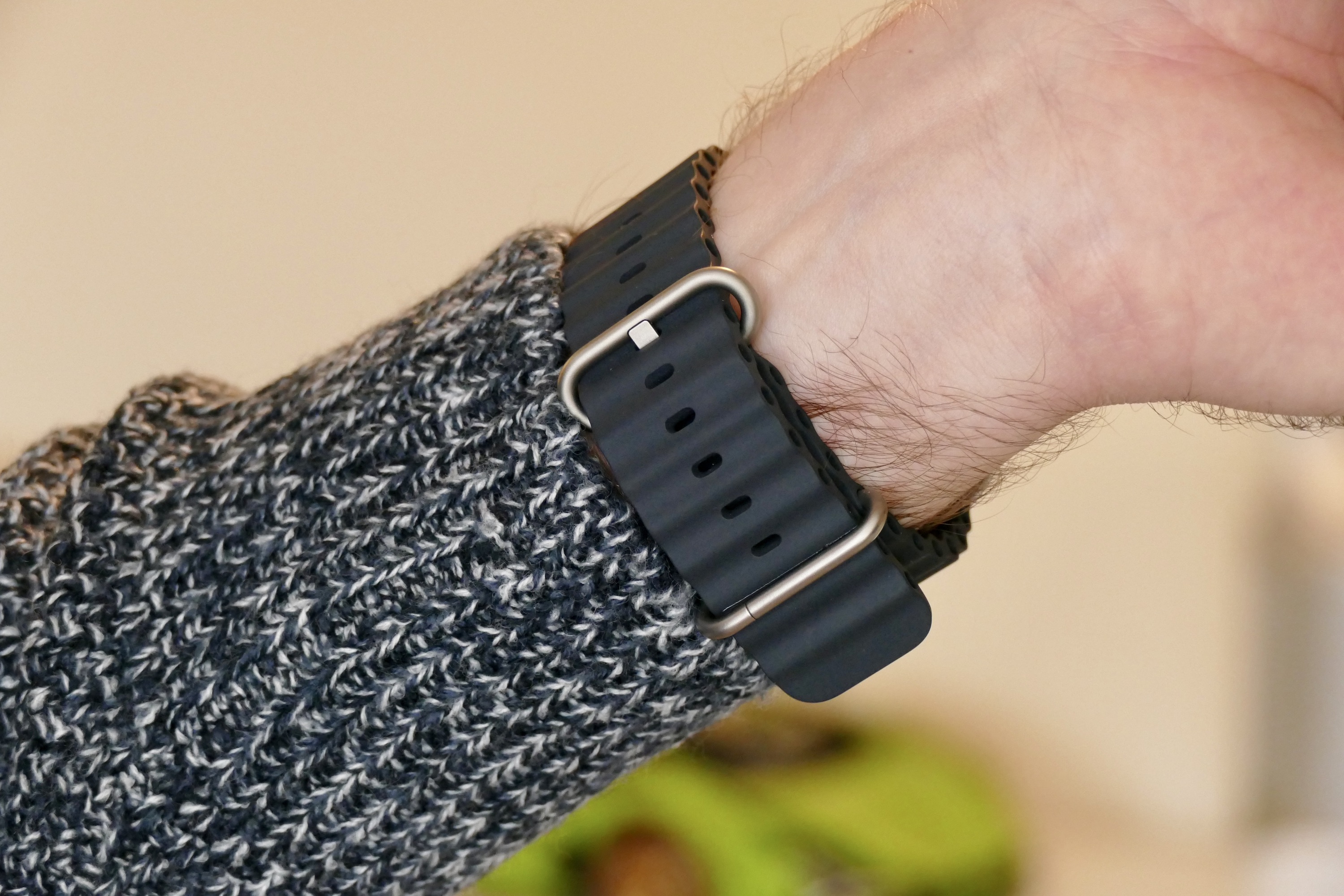 However, while this could be a problem unique to me, the other issue I have will affect more people. The Apple Watch Ultra is just too big and heavy to be worn overnight. The quoted 61-gram weight is without the strap, and with the Ocean Band attached, it’s 95 grams. An Apple Watch Series 8 with the Sport Loop band is just 42 grams. Even the Series 8 is on the edge of what I find comfortable to wear in bed, and the Watch Ultra’s bulk is just too distracting. I’ve tried to do it, but I just take it off because I think about it on my wrist, and that’s not conducive to sleep at all.

Apple’s sleep tracking feature is improving, and the introduction of the temperature sensor does allow for more data to be collected. But if this is a really important feature for you, then do consider whether you’re prepared to wear such a heavy watch overnight, every night. If you’re unsure, the Series 8 or Watch SE 2 may be the better choice.

It’s unfortunate I haven’t found the Apple Watch Ultra light enough to wear when sleeping, because — unlike the Series 8 or Watch SE 2 — the Ultra’s battery doesn’t need recharging every day under normal use. My first charge lasted three full days, including all the usual daily notifications and use, plus a pair of tracked workouts. Although I abandoned sleep tracking on each of those nights, I still left the watch switched on. By the end of day three, it still had about 20% remaining when I put it on charge.

This is before I’ve taken the Watch Ultra out to try GPS or any other really power-intensive activities, but it’s really how I expect it to be mostly worn and used anyway. Committing to the Apple Watch Ultra every day will mean you don’t have to charge it up as much as you would another Apple Watch. During these first few days of testing, I think with the new Low Power mode, the Watch Ultra’s battery could last a fourth day without a problem. That’s great performance considering the screen and technology inside.

The design has grown on me, the case isn’t ridiculously large (comparatively), and the battery life is really excellent. The Apple Watch Ultra is expensive, and there are compromises to be made, but I’m beginning to think that it may actually be a viable and very powerful everyday smartwatch after all. I’m not absolutely settled on this being the case yet, and I’m not saying it’s a better buy than a Series 8 yet either, but I’ve definitely changed my initial thoughts about it.

My complete review is coming soon, but at this point, the Apple Watch Ultra looks to not be the entirely niche wearable the marketing, shape, and headline features tell you it is.