HomeNewsGoogle’s new privacy tool lets you know if your personal info was...
News 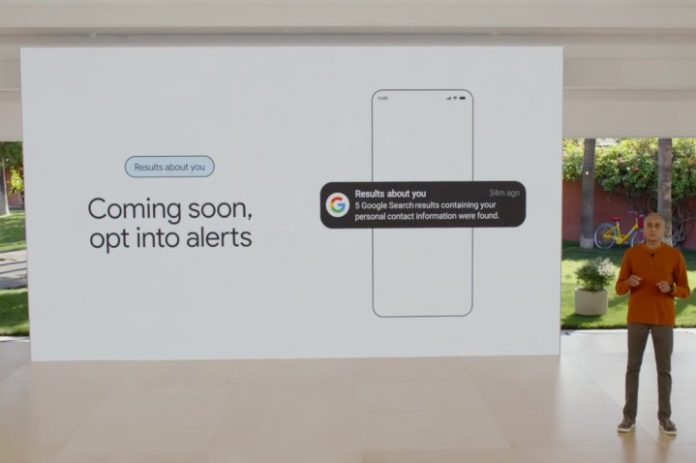 Google has just announced the expansion of its upcoming privacy tool. Made to protect your personally identifiable information (PII) from being too easy to find, the “Results About You” tool was first announced in May 2022. It will soon begin rolling out to a wider audience, and once it’s out, you’ll be able to easily request the removal of your personal data.

Now, at Search On 22, Google shared that it will be expanding this tool with an additional useful feature — the ability to set up alerts if, and when, your PII appears on the web.

Most of us have looked our own name up on Google at one point or another, if only out of curiosity. Sometimes, these searches may provide unwelcome results. If you’ve searched for yourself on Google and found that personal information about you has been shared without your consent, you could ask Google to remove it. Previously, this mostly included bank information and credit card numbers, but earlier this year, Google expanded that set.

Now, if you find your physical address, phone number, and/or email address online, you can ask Google to take care of that for you and get it removed. However, with the introduction of the new “Results About You” privacy tool, doing this will be even easier. You’ll just have to click the three dots next to the search result, request the removal, and then monitor the status of your request.

During Search On 22, Google announced that this feature will soon begin rolling out to users within the U.S. who use the search engine in English, with a global launch to (presumably) follow at a later time. Google has also revealed that it’s taking privacy protection one step further by expanding the tool.

Starting in early 2023, you’ll be able to set up alerts about your personal information appearing in the search results. If any new entry pops up with any of your PII, Google will let you know so that you can request the removal as soon as possible. While this doesn’t scrub the data from the actual website it appeared on, it will go a step further in making sure it’s more difficult to find.