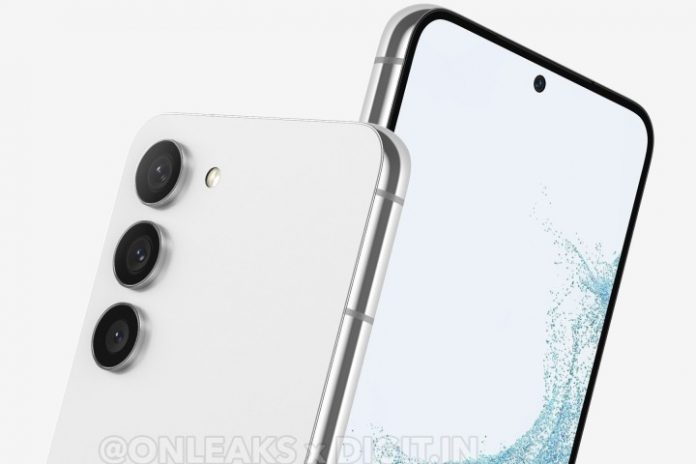 Samsung is still months away from the launch of its next camera-centric flagships, but just like clockwork, leaks are already here to spoil the surprise. OnLeaks (via SmartPrix) has shared the first alleged renders of the Galaxy S23 Plus, and it looks pretty familiar. We also get an up-close look at the standard Galaxy S23 (via Digit), flaunting an identical design in a smaller chassis.

From the front, the design is indistinguishable from the Galaxy S22. The thin symmetrical bezels are here to stay, and so is the Infinity-O design language offering a centrally-aligned front camera at the top. It looks pretty clean and far less obtrusive than the pill-shaped Dynamic Island on the iPhone 14 Pro.

Where Samsung’s design team has put some effort is the rear panel. Instead of a protruding camera hump that we saw on the Galaxy S22 and its predecessor, Samsung is going with the floating lens design. No, it’s not original, because the design has already been implemented on the Galaxy S22 Ultra.

It’s great to see the camera island going away in favor of discrete lens rings, achieving a far more minimalist look. There are three cameras at the back, most likely following the tried-and-tested main + ultrawide + telephoto lens formula.

What to expect from Samsung’s next flagships

We don’t know much about the Galaxy S23’s innards at this point in time, but the customary chip upgrade situation will be a tad different next year. There is a strong indication that Qualcomm’s upcoming Snapdragon 8 Gen 2 will be powering the Galaxy S23 trio.

However, an Exynos version might not be on the table this time around. Qualcomm’s recent partnership strengthening strategy with Samsung gave a clear indication that the share of Snapdragon chips in Galaxy flagships will only go up in 2023, and beyond.

We are also expecting Samsung to put its 200-megapixel ISOCELL HP3 camera sensor inside the Galaxy S23 series phones, but it’s quite likely that the beefy snapper will be exclusive to the Ultra model.

What we would look to see is slightly faster wireless charging on the upcoming flagships. Samsung is still struggling to move beyond the 15W mark, while the likes of OnePlus have already touched the 150W figure.

It would also be great to see Samsung improve the thermals, especially on the less pricey Galaxy S22 models, and do more on the battery optimization side. Samsung usually schedules its Unpacked event in the January-February window for launching Galaxy S phones, and we’re expecting the cycle to continue next year, as well.