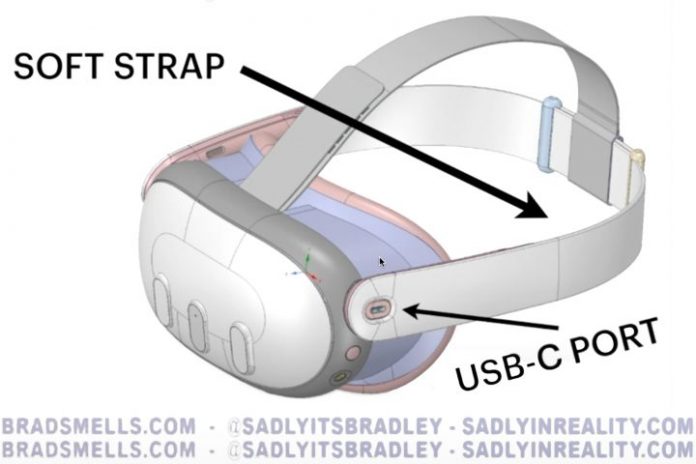 One of the most prolific leakers of Meta VR information came across what appears to be CAD renders of yet another new VR headset. With Meta’s Quest Pro expected to be announced soon at the upcoming Meta Connect event, the next model will undoubtedly be the Meta Quest 3, landing as early as 2023.

Based on the leaks from Brad Lynch, Meta’s Quest 3 seems to incorporate several of the Quest Pro’s features while not quite achieving the same degree of sophistication. It’s meant to be a low-cost VR headset that replaces the aging Quest 2, while the Meta Quest Pro is aimed at professional users that want to work and attend meetings in VR.

In the CAD files, the Quest 3’s battery is still positioned at the front but pancake lenses should reduce weight, making the headset comfortable enough to wear for longer periods of time without neck and face fatigue. The Quest Pro is expected to have a better balance with the battery placed at the back. Pancake lenses are expected to provide a larger sweet spot of crisp focus so it’s good news overall.

Lynch suggests that the head strap might be upgradeable; however, the CAD images show the headphone and USB-C ports to be part of the head strap so that might interfere with customization. A four-camera array and depth sensor seem likely, which will facilitate mixed reality. The cameras shown in the leak include both monochrome and color sensors, similar to leaks for the Quest Pro, so the Meta Quest 3 should have color pass-through.

It looks like a very nice refresh of Meta’s budget headset is coming sometime in 2023. More details of the CAD images and Lynch’s insightful speculation can be heard on his YouTube channel, SadlyItsBradley.