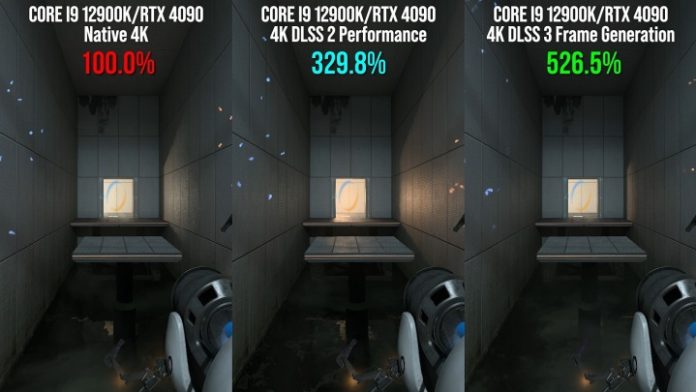 Nvidia’s upcoming DLSS 3 was just tested in several gaming scenarios, and the results are nothing short of impressive.

DLSS 3 boosted the frame rates significantly, sometimes by up to five times, even in CPU-bound games. So far, it really does seem like DLSS 3 is living up to Nvidia’s previews of it.

With around two weeks left until the launch of Nvidia’s RTX 4090, the first reviews and tests are starting to pour in. Digital Foundry was able to get an RTX 4090 ahead of time and decided to put it through the wringer in a number of DLSS 3-oriented tests.

The tests were carried out in three games: Cyberpunk 2077, Marvel’s Spider-Man, and Portal RTX. All three of these titles are early adopters of DLSS 3, and Digital Foundry was given preview builds to work with during the tests. Although the publication was unable to share the exact frames per second (fps) figures, it was allowed to give us a sneak peek at the performance multipliers.

As a refresher, DLSS 3 is the latest iteration of Nvidia’s upscaling technology, and it differs from the previous version by adding A.I. frame generation. This can have an impact on latency, which is why Nvidia added Reflex as a tool made to combat that. Nvidia Reflex is meant to nullify the latency increase caused by frame generation and perhaps even knock it down a little lower, too.

The description of the technology pretty much sums up Digital Foundry’s experience with it. For starters, games that support DLSS 3, such as Marvel’s Spider-Man, have an added option in the settings that lets you activate or deactivate frame generation. Toggling it on automatically enables Nvidia Reflex.

As far as performance goes, the RTX 4090 did a great job — as expected. The card is far more powerful than what most modern titles require, but Spider-Man and Cyberpunk 2077 are both demanding, and yet, the games were running on max settings on a 4K 120Hz screen without a hitch. This was with DLSS 3 enabled.

The games were tested with DLSS 3, DLSS 2, and at native 4K resolution. In Portal RTX, enabling DLSS 2 boosted the performance by 329%, but DLSS 3 took that several steps further all the way up to 526% of the native (hidden) fps.

Now, DLSS 3 is not perfect. Digital Foundry mentions that fast motion, especially close to the camera, can cause artefacts, and HUD elements have their issues too. However, for the most part, it seems like Nvidia did a good job with it.

DLSS 3 will launch on October 12 when Nvidia’s new flagship, RTX 4090, hits the shelves.