HomeNewsDeveloper says it can turn your AMD 6800 XT into an Nvidia...
News 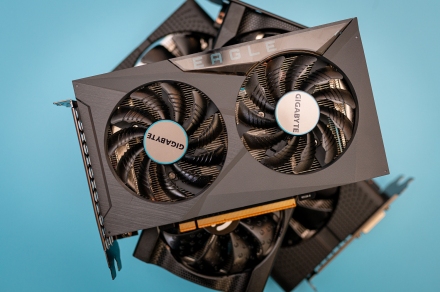 Do you want to turn your AMD Radeon RX 6800 XT GPU into Nvidia’s flagship GeForce RTX 3090 Ti? Well, that might actually be impossible, but a developer claims that this new third-party tool will effectively do just that.

Through clever voltage and frequency modifications, the developer was able to boost the frequency of the RX 6800 XT by a considerable amount. But can these claims be trusted?

Fall plans. You already heard about my new calculator for DDR5 (demo soon), today it's time to tell you about the presets for RDNA2 video cards which could surprise you.

More in the slides…😎 pic.twitter.com/WnVUJOdmuR

Yuri Bubliy shared the news on Twitter, describing the tool and showing off benchmark results to prove the claim. By a clever mix of overclocking and undervolting the GPU, Bubliy was able to boost the clock speed of the AMD Radeon RX 6800 XT by 300MHz, which is no small feat. What’s perhaps even more impressive is that the developer achieved this without altering the factory settings for the card’s fans and thermal throttling.

While anyone can tinker with the voltage and frequency to try to achieve the desired result, not everyone wants to. For that reason, Bubliy is working on an upcoming third-party tool dubbed the Radeon Monster Profile. This tool will improve the performance of AMD Radeon RDNA 2 graphics cards by adjusting those things for you, and the result seems promising.

According to the benchmark shown by Bubliy, the utility was able to increase the frequency of the RX 6800 XT by 13% over its maximum stock speed. This, indeed, puts it on par with Nvidia’s GeForce RTX 3090 Ti, and if this proved to be sustainable, it would be a great way to boost your GPU with minimal hassle. However, it’s important to take these claims with some skepticism.

For one, we’re only seeing one synthetic benchmark here, and to see whether the RX 6800 XT really keeps up with the RTX 3090 Ti would require much more than that, including some real-life scenarios in which the GPU could be tested. Just because Bubliy was able to achieve that result in one single benchmark doesn’t mean that the gains will stay the same across the board. The second thing is that in order to do this safely, one would require some pretty strong cooling to ensure that the GPU stays stable.

There’s also the fact that pure frequency adjustments won’t magically turn an AMD card into an Nvidia card; the feature set will still be different and that might matter to some users. Still, if all you want is to see an increase in performance, it’s nice that there might soon be a tool to make that task more approachable. Remember that you can already try this at home through GPU undervolting, for which we have an in-depth guide here.