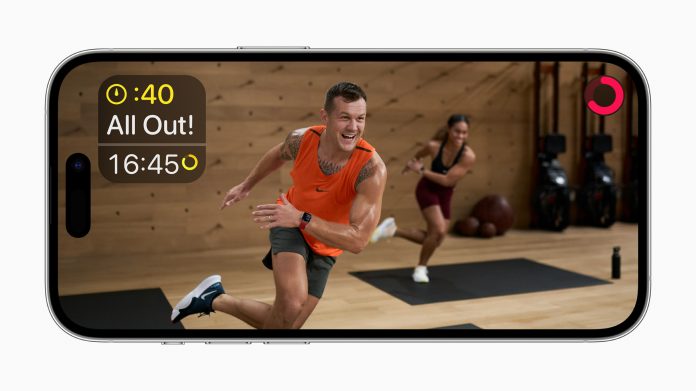 Apple Fitness+ will be available to iPhone users without an Apple Watch starting with iOS 16.1 and tvOS 16.1, which are currently in beta testing.

In the second beta of iOS 16.1 seeded to developers earlier today, user Jadyn Daniel noticed that it is now possible to subscribe to Apple Fitness+ on the iPhone without having an Apple Watch. And in the second beta of tvOS 16.1 for the Apple TV, Screen Times editor-in-chief Sigmund Judge uncovered a new screen that allows users to connect an iPhone for Apple Fitness+ workouts, with no Apple Watch required.

Apple already announced that Fitness+ would be available to iPhone users who do not own an Apple Watch starting “later this fall” in all 21 countries where the service is currently offered, including the United States, Australia, Austria, Brazil, Canada, Colombia, France, Germany, Indonesia, Ireland, Italy, Malaysia, Mexico, New Zealand, Portugal, Russia, Saudi Arabia, Spain, Switzerland, the UAE, and the UK.

Here’s a new thing in iOS 16. Developer Beta 2. In the fitness app I can now subscribe to Apple fitness+ without having an Apple Watch! Is everyone seeing this or is it only [email protected] #iOS16 #Apple #beta #viraltwitter #viraltweets #iOS16th #AppleWatch #fitness pic.twitter.com/IWc7TLDEaa

Launched in December 2020, Apple Fitness+ features a library of over 3,000 workout and meditation videos, with new content added weekly. The subscription-based service is available through the Fitness app on the iPhone, iPad, and Apple TV, with U.S. pricing set at $9.99 per month or $79.99 per year. Without an Apple Watch, iPhone users will not see real-time metrics like heart rate and calories burned during a workout.Related Roundups: Apple TV, iOS 16, iPadOS 16Tag: Apple Fitness PlusBuyer’s Guide: Apple TV (Caution)Related Forums: Apple TV and Home Theater, iOS 16
This article, “Apple Fitness+ Available Without Apple Watch Starting With iOS 16.1, tvOS 16.1” first appeared on MacRumors.com

Facebook
Twitter
Pinterest
WhatsApp
Previous articleThis Lenovo ThinkPad 2-in-1 deal cuts over $1,800 off the price (seriously)
Next articleYouTube opens the door for creators to make more money from Shorts
- Advertisment -