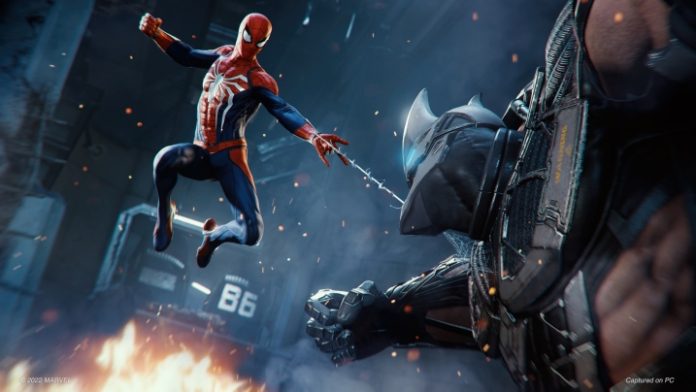 I’ve been singing the praises of AMD’s FSR 2.0 (FidelityFX Super Resolution 2.0) since I first saw it in Deathloop. It’s a great performance-boosting tool, and going into testing of Marvel’s Spider-Man PC port, I was expecting to see it close the gap between playing the game on an AMD GPU versus Nvidia.

But Marvel’s Spider-Man PC port shows a different side of gaming on AMD — and unfortunately, it’s one that doesn’t look nearly as impressive by comparison.

Marvel’s Spider-Man is a much different FSR 2.0 game. Since launch, five games have FSR 2.0 support: Chernobylite, Deathloop, Farming Simulator 22, God of War, and Tiny Tina’s Wonderlands. Sony’s latest port is a different beast entirely. Not only is it an open-world game with a vast skyline of buildings, it’s also extremely fast.

Zipping through the island of Manhattan is as fun as ever on PC, but FSR 2.0 puts a damper on the experience. Every zip forward results in a complete drop in image quality as FSR 2.0 struggles to fill in the missing detail. Pixel peeping is one thing, but there’s a noticeable drop in resolution every time you boost forward while flying around the city. And if there’s anything you’re going to do a lot of in Marvel’s Spider-Man, it’s fly around the city.

For a brief moment, this is what you’ll see even at 4K with motion blur turned off.

In fairness, this drop is something Nvidia’s own DLSS (Deep Learning Super Sampling) implementation also struggles with in Marvel‘s Spider-Man, too, which you can see in the screenshot below. It’s much less severe than FSR 2.0, though, and it’s tough to spot in motion.

DLSS shows some artifacts, particularly around the webs, but they’re not nearly as severe.

FSR 2.0 has proved itself a worthy alternative to DLSS, especially when you factor in the lackluster image quality of FSR 1.0. Marvel’s Spider-Man suggests that it might not be an equal comparison, though. Ever since we saw Temporal Super Resolution (TSR) in Ghostwire Tokyo, I’ve been ready to move on to general-purpose temporal supersampling that doesn’t require specific hardware. But Marvel’s Spider-Man is a sign that DLSS still has an edge in some cases.

DLSS, FSR 2.0, and developer-made tools like IGTI in Spider-Man are all based around temporal (time-based) data. Previous frames provide the information necessary for the supersampling in upcoming frames.

Lower image quality is a side of AMD’s supersampling tool we haven’t seen yet.

When you’re boosting forward in a game like Spider-Man, though, there’s just not enough detail, leading to the drop off in resolution (or what you might call temporal artifacts). FSR 2.0’s set algorithm can’t keep up with these boosts, while DLSS seems able to extract more detail with its machine learning backbone.

That doesn’t mean you should throw out FSR 2.0. Marvel’s Spider-Man is a litmus test, and it’s pushing FSR 2.0 to its limits. FSR 2.0 is still incredibly impressive, and in most games, it’s just as good as DLSS. But, there may be downsides in image quality in rare cases, which is a side of AMD’s latest supersampling tool we haven’t seen yet.

The upsides of machine learning

Although TSR and FSR 2.0 are remarkably close to DLSS in terms of image quality, Nvidia’s A.I.-driven tech still has advantages. Marvel’s Spider-Man exposes that, not with DLSS itself, but with the newer Deep Learning Anti-Aliasing (DLAA).

DLAA is basically DLSS  with the upscaling removed. It has the same backbone as DLSS, but the game runs at the native resolution of your monitor. It’s supposed to make a native image sharper, not make a lower resolution image look like it’s native. And as you can see in the screenshot above, DLAA makes a pretty big difference.

This is something that hasn’t been done with algorithm-based anti-aliasing so far, adding more evidence that Nvidia’s insistence on machine learning isn’t all hot air.

If you’re picking up Marvel’s Spider-Man, you have three options for a performance boost: DLSS, FSR 2.0, and Isomniac’s own IGTI. Isomniac’s tool is actually behind the game’s built-in dynamic resolution option, but the developer decided to expose the setting on PC even if you don’t want to use dynamic resolution. That’s great.

FSR 2.0 may struggle with the speed of Spider-Man, but it still puts up numbers. In fact, this is the first time I’ve seen it clearly beat DLSS (if only by a bit).

IGTI provides the best performance, but it’s not worth the trade-off in image quality. You can see all of the tools side-by-side with their Ultra Performance presets below, and IGTI is by far the worst.

Otherwise, the three tools are tight. From Quality to Ultra Performance presets, they’re all within a couple of frames of each other. IGTI may be similar to FSR 1.0 in image quality, and FSR 2.0 may struggle with fast motion in Marvel’s Spider-Man. But there’s no denying that players are spoiled with performance-boosting options that aren’t always present in PC ports.

Marvel’s Spider-Man pushes FSR 2.0 to its limits, and we’re finally seeing the supersampling tool reach that wall. During my testing period, Insomniac actually patched FSR 2.0 support to improve image quality, and there’s still more work to be done. This might be a sign that adding FSR 2.0 to a game might not be as straightforward as we thought for certain games.

Hopefully, AMD will continue to refine its algorithm to handle intense motion such as what Marvel’s Spider-Man imposes. There’s no denying that FSR 2.0 is an extremely impressive tool that finally puts some heat on DLSS. But it’s not perfect, and the relatively slow adoption rate means we haven’t seen it under pressure in a wide range of games.

If you have an Nvidia GPU, I recommend using DLSS. If you don’t, FSR 2.0 is still a solid option — just try to aim for the higher fidelity performance modes.

As I wrote about in my previous ReSpec entry, FSR 2.0 still has amazing potential, and Marvel’s Spider-Man doesn’t change that. But this port pushes FSR 2.0 to its limits and shows where there is still work to be done.