HomeNewsVisible just added a new plan, lowered prices, and took away a...
News 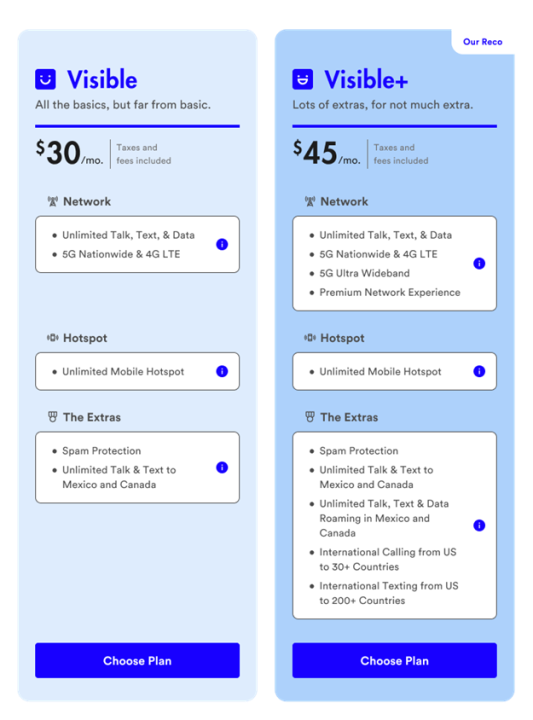 Visible has a significant revamp to its Verizon-backed phone service, adding new features and taking away some at the same time. Up until now, the company prided itself on its singular all-digital plan, but now Visible’s single wireless plan has been reworked to cost less and is being offered alongside a brand new option. The two plans now available are called Visible, the reworked original plan, and the all-new Visible Plus.

The Visible plan includes unlimited talk, text, data, and hotspot for just $30 per month — a reduced price from the $40 per month the plan used to cost. The other plan is Visible Plus, which includes 5G Ultra Wideband access, a first for the company’s offerings. Visible Plus also includes 50GB of “premium network experience,” roaming coverage in North America, and global calls to more than 30 countries outside of the U.S. You get all of that for $45 per month, just $5 more than the cost of the old Visible plan and $10 more compared to the new one.

With these two new plans, Visible is looking to “reimagine wireless and be radically simple, fundamentally accessible, and audaciously inclusive,” a mission statement that has become synonymous with the company. While both plans look great, the addition of 5G Ultra Wideband access to Visible’s offerings is a major step forward for Visible customers. Ultra Wideband service still isn’t available everywhere across the country, but if you live in an area where Verizon’s network supports it, Visible Plus should get you significantly faster speeds than what’s previously been offered on Visible.

Although 5G Ultra Wideband is only offered with a Visible Plus plan,  the revamped base plan is still a solid pick — especially for those who already had Visible due to its now reduced price. The only downside is that, alongside these changes, new Visible customers can no longer use Party Pay. Previously, Visible Party Pay allowed you to join someone else’s ‘party’ for a reduced monthly rate. It was similar to a family plan, but Party Pay worked with anyone, not just close friends or family members. If you joined a Party Pay with enough people, your monthly bill could be as little as $25 per month. Existing customers in Party Pay won’t see any changes, but if you’re joining Visible for the first time, that option is gone.

As such, this ends up being a mix of good and bad news. If you’re signing up for the base Visible plan and didn’t like the idea of jumping through a couple of hoops for Party Pay, you can now get the old $40 plan for just $30 — no group plan required. However, Visible’s now taking away the option of getting its base plan for $25 per month and making it a flat $30. You win some, you lose some.