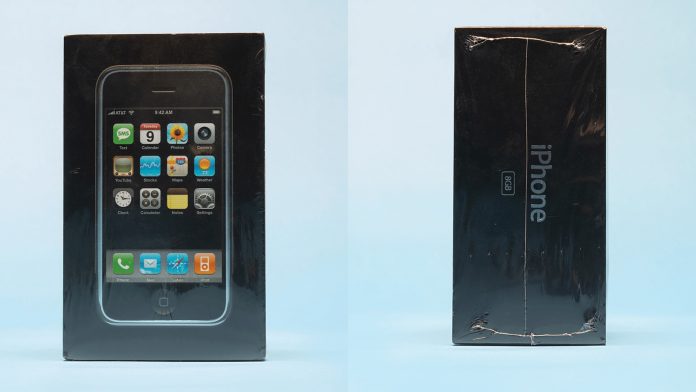 A sealed original iPhone made from an early production run has sold for $35,000 in a recent auction.

Based on the box design, this ‌iPhone‌ was among the initial batch of original ‌iPhone‌ models sold in the first few months after the ‌iPhone‌ launched in June 2007, as the Home Screen does not include an iTunes Store icon. The iTunes Store app was initially not included on the ‌iPhone‌ and wasn’t added until a few months later with the release of ‌iPhone‌ OS 1.1 in September 2007. The ‌iPhone‌ box design was subsequently updated to add the icon.

The listing doesn’t offer any clues on the condition of the actual ‌iPhone‌ inside the box, but given it’s still sealed, it should be in brand-new condition.

This article, “Unopened Original iPhone Sells for $35,000 at Auction” first appeared on MacRumors.com

Facebook
Twitter
Pinterest
WhatsApp
Previous articleKuo: Apple Has Completed Hardware Tests for iPhone 14 Satellite Connectivity, But Launch Depends on Partners
Next articleWhen to Expect the Next MacBook Pro, iMac, and Other Macs to Launch