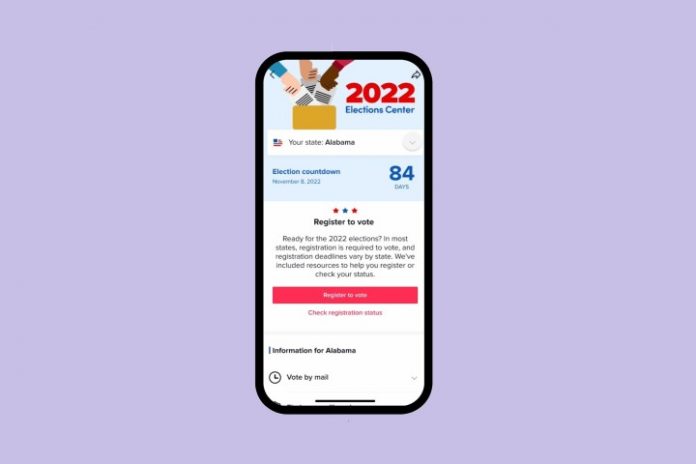 Now that we’re much closer to the U.S. midterm elections, over the past week or so platforms like Twitter have been announcing their plans for defending against election misinformation on their appNow, TikTok has joined its competitors in doing the same.

On Wednesday, TikTok issued a statement on its “commitment to election integrity,” written by Eric Han, its Head of U.S. safety. In the statement, Han outlined TikTok’s own plans for reducing election misinformation on its short-form video-sharing app.

Notably, these plans include rolling out a new Election Center feature and putting an emphasis on the app’s existing ban on paid political ads. And that ban on political ads is particularly interesting because Han notes that it also prohibits any paid sponsored political content created by TikTok influencers.

Part of TikTok’s strategy against election misinformation is its new Election Center. The idea here is that since TikTok users may be interested in election-related content, TikTok will provide those users with “authoritative information and sources in more than 45 languages, including English and Spanish” via the Election Center. This informational center will also feature voting information from various organizations such as the Center for Democracy in Deaf America and Federal Voting Assistance Program. Election results are also expected to be available in-app from The Associated Press.

Han also reiterated that TikTok already has a ban in place against “paid political advertising” on its platform. Han went on to underscore that the ban also doesn’t allow political sponsored content from TikTok influencers and creators. Such content is expected to be taken down if posted:

“Over the next few weeks, we’ll publish a series of educational content on our Creator Portal and TikTok, and host briefings with creators and agencies so the rules of the road are abundantly clear when it comes to paid content around elections. If we discover political content was paid for and not properly disclosed, it is promptly removed from the platform.”

6/ TikTok does not allow paid political ads, including content that creators are paid to create. We'll continue to educate creators about the responsibilities they have to abide by our Community Guidelines and Advertising policies, and will remove content that violates our rules.

Election-related misinformation is a real problem for social media platforms. Platforms like Twitter and Facebook have infamous reputations for being toxic breeding grounds for misinformation. The upcoming U.S. midterm elections will be a test of these platforms’ new policies and features, and it’s a chance to show their users that they’ve learned from their mistakes. It still remains to be seen if any of these policies will be enough to effectively reduce misinformation.