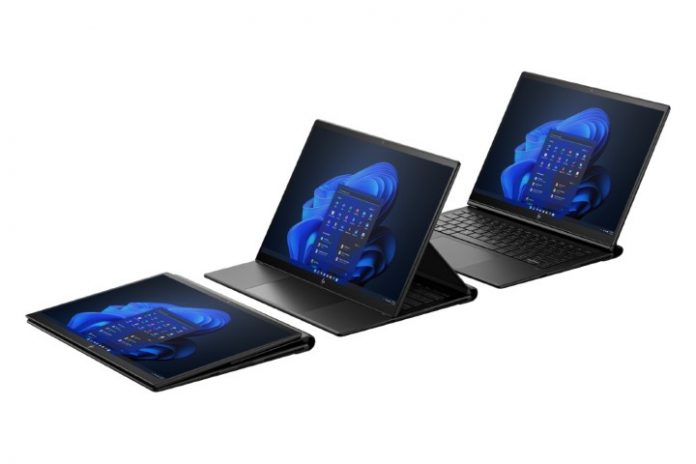 The new Dragonfly Folio G3 is HP’s third attempt at this unique 2-in-1 design, which uses a “leatherlike” folio case (as HP puts it) to transform it into different modes.

The Dragonfly Folio G3 can sit upright like your everyday normal laptop, but when you need to be more immersed in your screen, you can pull it forward. It will cover up the keyboard and leave you with only the screen and the trackpad. Or you can pull the screen all the way forward and turn the entire machine into a tablet, albeit a rather thick one.

That makes it very different from standard 2-in-1 laptops like the aluminum Surface Pro with its detachable keyboard.

But all in all, the Dragonfly Folio G3 looks very similar to the Elite Folio from last year. It’s a 3:2 13.5-inch device that still folds and unfolds in the same way. The Dragonfly Folio G3 is slightly heavier (3.09 pounds) and thicker (0.7 inches) this time around, but you get a larger 56-watt-hour battery instead.

The other significant changes include the option for a higher-resolution (3K2K) OLED screen and improved performance. The Elite Folio used a Qualcomm Snapdragon processor, whereas the new Dragonfly Folio resorts to a more conventional Intel processor. The Dragonfly Folio G3 comes with the latest Intel 12th-generation core processor, with a choice between an i5 and an i7 in both non-vPro and vPro configurations. HP didn’t specify which exact processors would be included, but previous devices in the Folio line have been fanless designs.

The G3 has an integrated Intel Iris Xe graphics unit and up to 32GB of LPDDR5 RAM. HP hasn’t said how much RAM the base model comes with, but the Elite Folio started at 8GB. It also ranges from 256GB up to 2TB of solid-state drive (SSD) storage space.

HP also includes a compatible stylus in the box, so you won’t have to shell out an extra $100 to get one, like with some other brands (looking at you, Microsoft and Apple). The G3 also comes with an Elite Premium keyboard, which matches the keyboard found in other Dragonfly business laptops and HP’s Spectre devices. The touchpad, meanwhile, is large at 120mm by 80mm and is a mechanical, clicking trackpad.

There are some nifty new features included with this unconventional laptop. For starters, the stylus is magnetic and can snap onto the side of the G3, where it will charge wirelessly. This is similar to the Apple iPad line but is unusual on a laptop.

HP also includes some of its own custom software experiences with the G3, such as an auto privacy alert. The sensors in the high-resolution 8MP camera can detect if someone is looking over your shoulder and warn you accordingly. The onboard AI can also detect background lighting and automatically adjust the camera’s output accordingly.

Finally, the Dragonfly Folio G3 comes with two Thunderbolt 4 ports and a 3.5 mm headphone jack. There isn’t a lot of I/O here, but again, you’re not going to be editing RAW images on this device.

The HP Dragonfly Folio G3 starts at $2,379 and is available starting today.