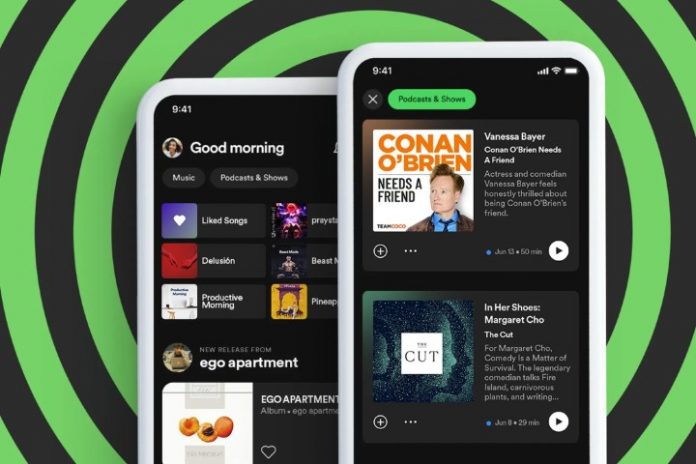 Spotify is giving the Home page of its app a major makeover by creating separate feeds for music and podcasts. The audio streaming company announced the changes on Tuesday, and the new feature is starting to roll out to Android users, with the iOS app set to receive it soon after.

The revamped Home page will have two separate tabs on the top left corner of the screen labeled “Music” and “Podcasts & Shows.” Tapping on the Music tab will take you straight to the music you’ve been listening to and give you playlist and artist recommendations based on the genres you hear the most. The Podcast & Shows tab will immediately show you the latest episodes of your favorite podcasts, as well as give you suggestions for new ones.

For those who listen use Spotify to listen to podcasts more than music, you’ll be able to read the synopsis of the latest episodes that pop up the second you click on the Podcasts & Shows tab. You can also save the episodes to Your Episodes and start listening to them without leaving the page.

The new feature was created in an effort to push more recommendations to listeners, but it was also done to declutter the mess of having music and podcasts mixed up together in one place. The Library page has the same idea of separating music and podcasts, but it has a few extra tabs — like Playlists, Artists, Albums, and Downloaded — which can make the process of finding the content you want to hear at the moment even more troublesome. It’s unclear whether the tabs on Home page will save us the extra taps, but it’s nice to see that the app is being a little more organized.