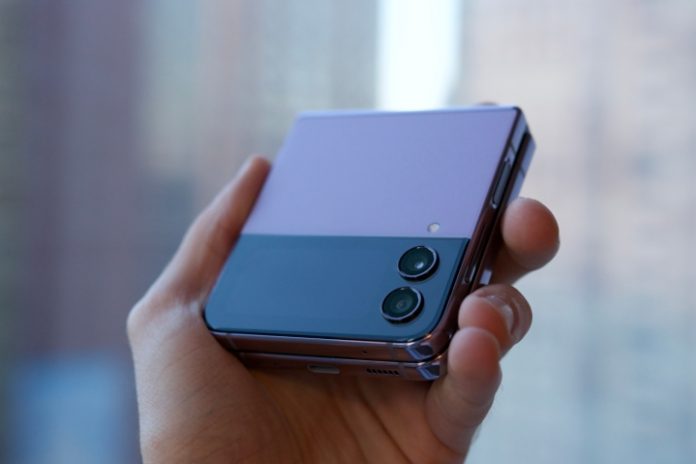 If you were an early adopter of the Samsung foldables and are looking to upgrade, you may be considering a switch from the Galaxy Z Flip 5G to the Galaxy Z Flip 4. The new Samsung clamshell foldable features a better display, a bigger cover screen, more features, a bigger battery, and more. Surprisingly, the camera megapixel count has remained the same throughout the four generations of the Galaxy Z Flip lineup. But are the upgrades enough to tempt you to buy the latest device? Let’s find out.

While the Z Flip 4 is four grams heavier than the Z Flip 5G, you are unlikely to feel the weight difference when you hold them side by side. The one thing that Samsung hasn’t changed since the first-gen Flip is the fingerprint sensor position. It still lies on the right edge of the device.

Coming to the display, the Flip 5G came with an AMOLED display but lacked a 1Hz-120Hz high refresh rate, which is present on the Flip 4. But the first thing you’ll notice isn’t the main display.

What you’ll really notice is the cover screen. Samsung now offers a 1.9-inch Super AMOLED screen on the Z Flip 4 instead of the 1.06-inch Super AMOLED cover display that was found on the Flip 5G. As a result, the cover display is more intuitive than ever before, especially with the added widgets. Where the Z Flip 5G was limited to checking the time and snapping selfies, you can use the Z Flip 4’s cover screen for much more, such as viewing and responding to notifications, adjusting some quick settings, viewing the weather, and controlling music playback.

The main screen’s resolution remains the same at 2640 × 1080 pixels, which is unusual for four generations straight on any of the best Android phones, but the display is now brighter at 1300 nits peak brightness. And, since the Z Flip 5G is limited to a 60Hz refresh rate, it feels much slower than the 120Hz smoothness on the Z Flip 4.

The Galaxy Z Flip 5G was offered with a Qualcomm Snapdragon 865 5G+ processor paired with 8GB of RAM. While the amount of RAM remains the same on the latest offering, much has changed processor-wise over the years. The Galaxy Z Flip 5G came with 256GB of onboard storage alongside a 3,300mAh battery. It supported 15W fast charging with the option to wirelessly charge the phone or charge other devices with Wireless PowerShare. The battery life wasn’t something to boast about with the Flip 5G, with it barely making it through a full day of normal use (if you were lucky).

The Galaxy Z Flip 4 is powered by the latest Snapdragon 8+ Gen 1 processor, which is significantly more power efficient and has better NPU, GPU, and CPU performance. As a result, you get better cameras, battery life, and day-to-day performance. It comes equipped with 8GB of RAM, and Samsung is offering three storage variants, including 128GB, 256GB, and 512GB options. The Galaxy Z Flip 4 packs a bigger, 3,700mAh battery that supports 25W fast charging capabilities. In other words, you can make it longer through your day and recharge faster than before.

Samsung hasn’t changed the camera megapixel count from the Flip 5G to the Flip 4. Both clamshell devices sport a dual rear camera setup. You get a 12MP primary camera with optical image stabilization (OIS) and a 12MP ultra-wide-angle lens with a 123-degree field of view. On the front lies a 10MP shooter, but the Flip 4’s selfie shooter has a wider 80-degree field of view, so you can get better group photos. Similarly, the 12MP main camera on the Z Flip 4 has a 65% brighter sensor for improved low-light photography.

While the cameras might look the same on paper, the Galaxy Z Flip 4 offers better camera performance, thanks to the latest chipset and fine-tuned camera algorithms. It clicks more detailed and colorful shots than the Galaxy Z Flip 5G. Moreover, you can record videos in 4K at 60 fps, 1080p at 240 fps, and 720p at 960 fps on the Flip 4. Neither handset makes camera performance their main focus, but the Flip 4 offers the improvements you’d expect after two generations.

The Samsung Galaxy Z Flip 5G was launched with Android 10 and is now on its last legs. In contrast, the Galaxy Z Flip 4 ships with Android 12 based on a more advanced One UI 4.1.1 out of the box. The new smartphone will last longer with major Android updates, as well as security patches, coming to it long after the Z Flip 5G has received its last update.

The Galaxy Z Flip 5G was launched at $1449 for the base 8GB RAM and 256GB storage variant. Samsung has dropped the starting price to a $999 price tag for the Galaxy Z Flip 4, with the same amount of RAM and lesser 128GB of storage. You can also customize your Flip 4 with Bespoke Edition.

The Z Flip 4 is now available in Bora Purple, Graphite, Pink Gold, and Blue color options. However, the color options’ availability will depend on the markets. It is available across all major retailers.

The Samsung Galaxy Z Flip 4 offers better performance due to the latest Qualcomm processor. And thanks to that, it captures better images than the original Flip, alongside being more power efficient. The latest clamshell foldable from Samsung also packs a bigger battery and a larger, more intuitive cover display.

Combine all of these upgrades with proper water resistance, a slimmer hinge, and longer software support, and you are in for a delightful experience with the Samsung Galaxy Z Flip 4. If you are a Flip 5G user who wants to hold onto the form factor but needs to upgrade, the Galaxy Z Flip 4 has more than enough to warrant its purchase.