HomeNewsOnePlus 10T vs. Samsung Galaxy S22: Should you spend an extra $150?
News 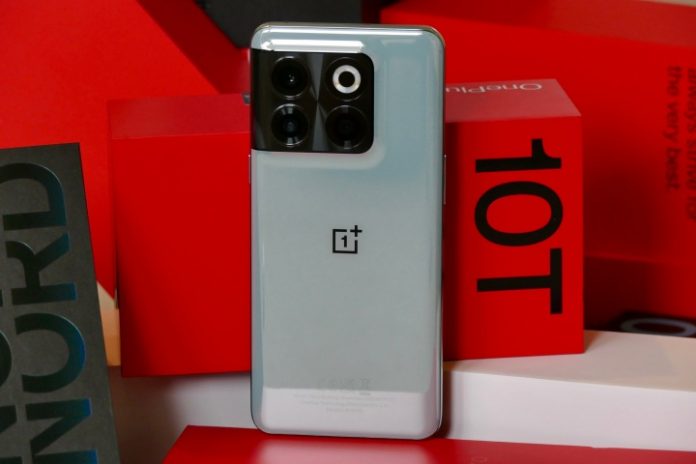 OnePlus has revealed the OnePlus 10T, a companion smartphone to the OnePlus 10 Pro. The first entry in its “T” series since the OnePlus 8T from 2020, it combines the powerful 4nm Qualcomm Snapdragon 8+ Gen 1 chip with a sharp 6.7-inch AMOLED display, implausibly fast 125W charging, and a triple-lens camera setup. And at $650, it’s a great price too.

But the OnePlus 10T isn’t the only Android flagship on the market. One of its biggest direct competitors is the Samsung Galaxy S22. It too is competitively priced, retailing for $799 and often available for even less. Despite the great price, it has a number of premium features — such as a beautiful design, a richly detailed screen, and a similarly muscular 4nm chip.

Which one is the better phone? We put this to the test in this head-to-head comparison, which will examine the specs, designs, displays, performance, cameras, and software of each phone. By weighing up the pros and cons of each, it should help the undecided make their choice.

To the casual observer, the OnePlus 10T looks much like the 10 Pro. It has a hole-punch selfie camera in the top-center of its 6.7-inch display, which is surrounded by pleasingly narrow bezels. It also has pretty much the same rear camera module design, featuring three lenses arrayed together in a square with an LED flash. From a distance, it certainly looks attractive, yet the effect is dispelled when you actually pick up the device. Gone is the aluminum frame of the 10 Pro, and in its place is a plastic alternative, which feels like plastic in the worst possible way. It’s sticky and warm and belies the relatively high price OnePlus is asking for the phone.

As for the Galaxy S22, design is certainly one of its strong points. While the basic S21 had a plastic back, the S22 has been upgraded with a glass equivalent, making it seem much more premium. Its camera module is arguably also a little more sleek and stylish than the 10T’s, with the way it slopes organically into the device’s shoulders still capable of turning heads.

Turning to the displays, each device isn’t too far off from the other. The OnePlus 10T boasts a 6.7-inch Fluid AMOLED display, which is a slight step down from the 10 Pro’s LTPO 2.0 AMOLED screen. The panel offers a resolution of 2412 x 1080 pixels, which is also less than that found on the 10 Pro, with a density of 394 pixels per inch. This contrasts with the 6.1-inch Dynamic AMOLED 2X display you find on the Galaxy S22, which contains 2340 x 1080 pixels. Both displays support a 120Hz refresh rate, providing for fluid scrolling and animations.

Samsung has covered the S22 with Gorilla Glass Victus Plus on its front and the rear, while the OnePlus 10T has the fractionally less dogged Gorilla Glass 5 to protect it. The latter also has only a basic IP54 rating, whereas Samsung’s device has been certified IP68, making it more resistant to water and dust. Combined with its aesthetic and display-related advantages, this gives the round to the S22.

The OnePlus 10T has been treated to the Snapdragon 8+ Gen 1, which is a step above the Snapdragon 8 Gen 1 found in the Galaxy S22. While the performance difference isn’t massive, the newer chip also enables slightly more efficient use of battery power. Taken with 8GB of RAM on the 10T (which can be upped to 16GB for a higher price), OnePlus’s device is a touch faster than Samsung’s.

Both phones come with 128GB of internal memory as standard and are available (for more money) with 256GB. Neither carries a microSD card slot, so you may have to ration available storage space.

There’s quite a big gulf in battery sizes between the two devices, with the OnePlus 10T packing a 4,800mAh cell and the Galaxy S22 having a 3,700mAh counterpart. This does equate to longer everyday longevity in practice, with the 10T able to last about a day and a half under normal usage, whereas the S22 only just makes it a full day. On top of this, the OnePlus 10T offers incredibly fast charging. With 125W speeds in the U.S. (or 150W in other markets), the 10T goes from 0-100% in about 20 minutes. The S22 simply can’t come close to matching, which gives the OnePlus an easy win this time. The lack of wireless charging on the 10T isn’t ideal, but everything else in this department is excellent on the phone.

The 10T’s specs are decent enough, but in reality, it doesn’t shine as much as the Galaxy S22’s. The 50MP main lens takes very pretty photos in good, natural lighting, but as with a few too many Android devices, it struggles on cloudy days or when lighting isn’t quite optimal. Its ultrawide lens also isn’t as capable as its main camera, while its macro camera was described in our review of the phone as “almost entirely pointless.” As such, it doesn’t really offer as much versatility as it would like to think.

By contrast, the S22 is a better all-around camera phone. Its main lens captures sharp pictures with impressive colors, details, and balance. Likewise, its portrait mode holds its own against the iPhone’s, while its ultrawide lens is more useful than the 10T’s.

The OnePlus 10T ships with OxygenOS 12 built over Android 12, while the Galaxy S22 layers One UI 4 over the same Android 12 skeleton. While software is (to some degree) a subjective and individual experience, it’s arguable that Samsung’s Android skin is just a little better overall this time around. OxygenOS may be quick and reliable, but it also has a few small niggles — such as showing old notifications, being geared by default more towards battery conservation, and an overemphasis on sometimes unnecessary system notifications.

As for One UI 4, it removes many of these annoyances while also adding a range of helpful features, such as Smart Calendar (which automatically recognizes dates). It also has the edge in terms of updates, since even though OnePlus is promising three years of core Android updates, Samsung has gone one better with four.

Longtime OnePlus fans may be disappointed to learn that the OnePlus 10T lacks the alert slider you find on pretty much every previous OnePlus phone. Still, it does come with a few special features worth mentioning — such as a reliable in-screen fingerprint sensor, 5G support, and the aforementioned insanely fast charging.

Like the 10T, the Samsung Galaxy S22 also supports 5G networks. On top of this, it offers Bixby (if you grow tired of Google Assistant), and Samsung’s desktop-emulating DeX Mode.

There’s not much in this round, since both devices are kind of cheaper versions of more premium phones. Nonetheless, with a little more versatility, we’re giving another round to the S22.

The OnePlus 10T starts at $649 for the model with 8GB of RAM and 128GB of memory. While pre-orders are live now in some countries, U.S. pre-orders don’t begin until September 1. And from there, regular sales don’t start until September 29.

The Samsung Galaxy S22 has an official price tag of $799 for the 128GB model, although it has been out for several months, so you should be able to find good deals online.

There isn’t a humongous difference between the two devices, but the Samsung Galaxy S22 wins in enough departments to clinch a clear overall victory. It flaunts a better design than the OnePlus 10T, as well as a more vivid screen, a more useful camera, and fractionally easier software (and more updates). Admittedly, the 10T does provide more power and superior performance, but it’s not by such a wide margin that it compensates for its other relative drawbacks. And with the OnePlus 10 Pro more competitively priced at around $799, OnePlus fans may be better off going for the Pro if they don’t want the Galaxy S22.