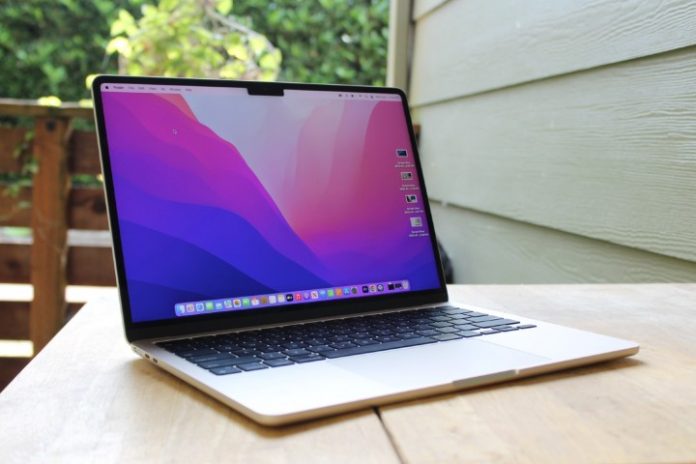 The MacBook Air M2 is Apple’s latest swing at its fanless Air design. Like the M1 model, it’s among the best laptops you can buy right now because of its excellent portability, battery life, and, above all, performance. But buying the wrong MacBook Air M2 could result in a laptop that’s up to 50% slower. Seriously.

In this guide, we’re going to break down what the M2 MacBook Air is, the different configurations available, and answer if you should buy Apple’s latest laptop. Most importantly, we’ll guide you to the configuration you should buy to avoid a clear performance pitfall.

The latest version of the MacBook Air comes with Apple’s M2 processor. It’s around 15%-20% faster than last-gen’s M1 depending on the application, and the 2022 MacBook Air is the only laptop with the M2 chip outside of the 13-inch 2022 MacBook Pro. Don’t by swayed by the Pro model, though. The M2 Air and Pro have largely similar performance.

Compared to the last-gen M1 MacBook Air, the M2 model has a few changes. Like all Air designs, this one is fanless with a focus on portability (it’s only 0.44 inch thick and 2.7 pounds). There are a few subtle design changes, though, including more rounding on the corners and a notch for the webcam that everyone loves to hate.

More importantly, the M2 model comes with a Liquid Retina display, which is sharper and provides a larger color range than the screen on the M1 MacBook Air. The notch even gives you an extra 0.3 inch of screen to look at. Apple also took the time to upgrade from two speakers on the M1 model to four on the M2, as well as improve the webcam to 1080p.

Apple also improved battery life with a slightly larger battery, which lasted over 21 hours in our video playback testing. That’s hours above Windows laptops, even those with the best battery life.

Avoid the base M2 MacBook Air at all costs

There are only two M2 MacBook Air models available that Apple has as a starting point:


It seems simple enough, but the choice between these two configurations is what will determine if you have a good M2 MacBook Air or a bad one.

Short answer: buy the 512GB model. Shortly after launching, reviewers found out that the base 256GB model uses a single NAND chip for storage, while the 512GB model and even the M1 MacBook Air use two chips. That results up to 50% slower SSD performance, making the 256GB model feel more sluggish as it struggles to read and write data to the hard drive.

That’s why so many people are saying to avoid the $1,200 M2 MacBook Air. It’s slower than the 512GB model, sure, but the fact that it’s slower than last-gen’s M1 version is the kicker.

For $300 extra, you’re getting a much smoother laptop with the 512GB M2 MacBook Pro. It also comes with two extra GPU cores for around a 15% boost in graphics performance depending on the application (more on that below). The 512GB model also comes with a slightly larger 35W charger, which will speed up charging times by just a hair.

The M2 MacBook Air is a bit different than the previous generation in that you can configure up to 24GB of Unified Memory. That doesn’t mean you should, though. Between storage, the SOC, and memory, here’s the configuration I’d recommend:

This configuration comes out to $1,600, or $100 more than the 512GB, 10-core GPU model that Apple has as a starting point. 16GB of Unified Memory is the big difference, as it can represent as much as a 25% improvement in apps like Adobe Premiere. It also provides a decent boost to coding environments like Xcode.

24GB doesn’t provide that same boost, and it costs an additional $200. Most people won’t even notice a performance increase with 24GB, even in apps like Premiere. The only argument for it is if you run a particularly RAM-intensive application, and even then, 16GB provides most of the benefit over 8GB.

The same goes for the 10-core GPU. It’s $100 more expensive and doesn’t provide much of a benefit in gaming or video editing apps. It is significantly faster than the eight-core model in 3D rendering apps like Blender, though, so consider spending the extra $100 if that’s your jam. If it’s not, save the money. You won’t see any difference.

Should you buy the M2 MacBook Air?

If you’re sold on the M2 MacBook Air, buy the 512GB one. It’s the clear choice, and the extra $300 seems like chump change considering how much faster it is compared to the 256GB one. The M2 MacBook Air isn’t the best choice for everyone, though, shipping with a litany of issues that the older M1 MacBook Air didn’t have.

In particular, the M2 MacBook Air has issues with overheating. It doesn’t have a heat spreader or fans, and the M2 gets hot enough that it has to limit its performance to stay cool. Even the M2 MacBook Pro, which comes with a fan for cooling, reaches its thermal limit and starts reducing performance.

The M1 version, by contrast, has no issues with heat, which is why it received the rare Editors’ Choice award in our MacBook Air M1 review.

The M2 MacBook Air is more powerful, so more heat is expected. But it’s not a clear choice over the M1 model. Apple’s latest chip provides about an 18% boost based on our testing and a slightly larger battery. For anyone browsing the web and running basic applications, though, the extra boost won’t be super relevant.

This is even more important when you consider price. The M1 MacBook Air is $1,000, and as we covered above, you’re almost forced into picking up the $1,500 version of the M2 MacBook Air to get the same SSD performance. That’s why some people, like our resident mobile expert Andy Boxall, decided to get last-gen’s model when the M2 was announced.

Regardless of if you pick up the M1 or M2 model, you’re getting a fantastic laptop (short of the 256GB M2 version, that is). If you decide you don’t want to go with Apple for your next laptop, though, make sure to read our comparison between the M2 MacBook Air and the Dell XPS 13 Plus — they trade blows well for around the same price.