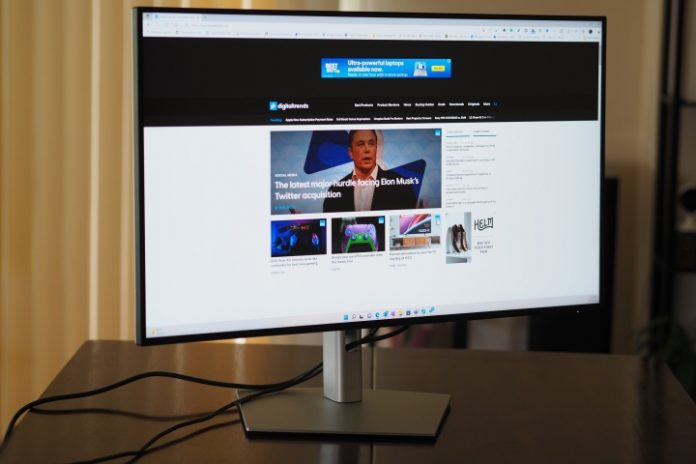 Display technology continues to progress. OLED, QLED, and micro-LED have all dramatically improved the quality of both laptop and external displays. But the old standby, IPS, isn’t sitting still. Thanks to a new technology from LG, IPS displays have also taken a step forward.

A collaboration with Dell resulted in what’s dubbed IPS Black, which promises to significantly enhance the quality of IPS displays. In particular, IPS Black is intended to increase the technology’s contrast ratio and provide deeper and truer blacks.

What is IPS Black?

IPS, or in-plane switching, has several distinctions from other display technologies such as VA, or vertical alignment, and TN, or twisted nematic. All three are LCD (liquid crystal display) technologies, differing in how the liquid crystals are aligned to display an image. With TN panels, the liquid crystals twist at a 90-degree angle and block light, and then the liquid crystals untwist when electricity is applied and light is allowed to pass through. TN panels are the least expensive and provide the worst image quality while offering fast refresh rates and response times.

VA panels have vertically aligned liquid crystals that block light until tilted when electricity is applied. VA panels offer the highest contrast ratios (up to 3,000:1), fast refresh rates but slower response times, and are less expensive than IPS. IPS panels use liquid crystals that remain dark until rotated when electricity flows through them. The most costly of the three technologies, IPS offers the best colors and viewing angles and enjoys fast response times and refresh rates, but its contrast ratio is typically lower.

That’s where IPS Black comes in. LG has enhanced standard IPS technology by minimizing light leakage when changing crystals, and it improved the liquid crystal array. The result is 41% deeper black levels — at less than 0.1 nits for IPS Black versus 0.2 nits for conventional IPS displays — and a significantly higher contrast ratio at 2,000:1 or more compared to the typical IPS display at 1,000:1. IPS Black also provides 1.2 times better color accuracy, especially in displaying grays, where the Delta-E is 0.6 or less (anything under 1.0 is considered excellent). Finally, IPS Black also improves contrast and color shift at wider viewing angles, up to a 1.4x higher contrast ratio at a 45-degree viewing angle.

The net result is an increase in detail in dark backgrounds thanks to improved grayscale expression and more accurate colors at every viewing angle. Colors are also richer and more accurate in general. The technology is aimed at designers, photographers, videographers, game developers, and others who will appreciate the increase in detail, the deeper blacks, and the more dynamic colors.

How does IPS Black perform?

So far, IPS Black technology has been implemented in a few external Dell displays, specifically the U2723QE, the U3223QE, and the U3223QE. We reviewed the UltraSharp 32 4K USB-C Hub Monitor U3223QE with IPS Black and gave it high marks for its wide colors at 100% of sRGB, 89% of AdobeRGB, and 98% of DCI-P3 with excellent accuracy at DeltaE 0.92. The display’s contrast ratio was also significantly higher than the IPS average at 2,050:1, giving it deep blacks and providing exceptional detail in darker backgrounds.

In this display, at least, IPS Black lives up to its promise. The U3223QE is an expensive display, but it also incorporates a comprehensive USB-C hub that adds to its cost. Overall, it’s not that much more expensive than other high-end 4K 32-inch displays, but it offers significantly improved image quality.

Where does it go from here?

Dell and LG collaborated on some of the first products to use IPS Black, but the technology isn’t limited to just their displays. It will also be offered to other manufacturers, meaning that IPS displays should remain competitive even as other technologies are introduced.