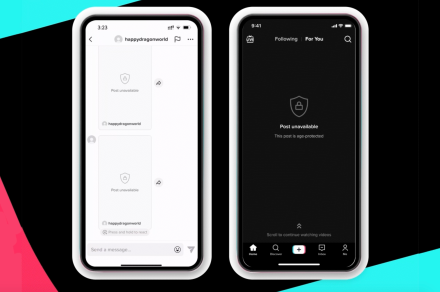 It’s been said that other platforms have been mimicking TikTok’s coolest features, but now it looks like the popular short-form video app is learning from its social media predecessors as well. TikTok is rolling out a few new content control features and they remind us of the sort of content controls you’d see on other platforms like Twitter and Instagram.

Content filters, based on specific topics aren’t new. If you’re a Twitter user, you know all about content filters, but you probably know them best as “muted words.” TikTok is adding a similar feature to its own app. According to their blog post, TikTok is adding a tool “people can use to automatically filter out videos with words or hashtags they don’t want to see from their For You or Following feeds.”

The examples given in their announcement reflect filtering out milder, less-controversial topics that people might not want to see, such as “DIY tutorials” (if users are no longer interested in them) or fewer animal-product-based recipe videos (if a user is transitioning to a plant-based diet). But hopefully, this new content filter feature also means that TikTok users can avoid being surprised by a video on their FYP that features a more serious topic that they find particularly distressing.

Plus, it would be nice if TikTok’s new content filters were more effective at filtering out content than Twitter’s muted words, especially if you’re trying to avoid spoilers on your favorite show. And it is annoying when you go to the trouble of setting up the filter only for your feed to ignore it and show you that topic anyway. This feature is expected to be available “in the coming weeks.”

TikTok also mentioned adding new age restrictions on content that they call Content Levels. Basically, it’s a way for TikTok to categorize content “based on thematic maturity.” So content that has “overtly mature themes” will be given “a maturity score” that then stops it from being viewed by TikTok users ages 13 to 17.

TikTok’s decision to add this kind of control seems indicative of a larger trend in social media, especially when you consider apps like Instagram have also recently pushed for more age verification (to create more age-appropriate experiences for its users) and other mature content settings, like IG’s recently expanded Sensitive Content Control (which minors can’t use to increase their access mature content). According to GIFs shared by TikTok, the Content Levels feature will simply say a given age-restricted video is “unavailable” and will further describe it as “age-protected.”

And lastly, TikTok said that it will also be limiting content recommendations for certain topics “that may be fine as a single video but potentially problematic if viewed repeatedly.” Examples given of such topics included “dieting” and “extreme fitness.” So basically, you may still see such content recommendations but they’ll show up less often to make room for other topics so that you aren’t watching the same type of video over and over again about topics that could be harmful the more you watch them. Instagram recently rolled out its own take on a feature that could help curb the same issue.

That version, however, is targeted toward teens and works by providing in-app “nudges” that suggest looking at a new topic if a user has been viewing posts on the same topic in Explore for a while.