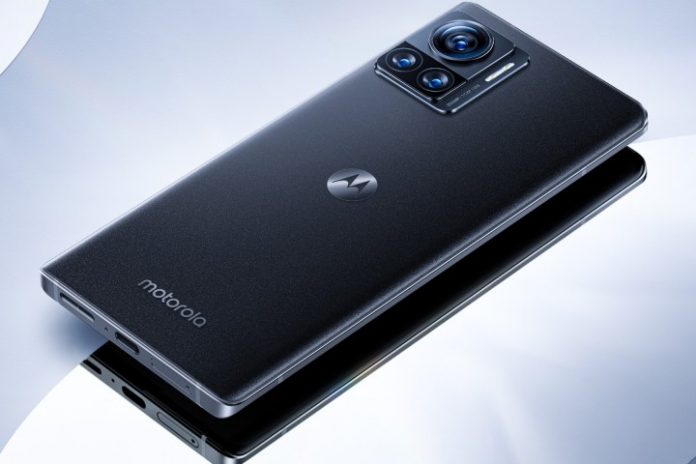 Samsung recently wowed us with a stunning photo sample captured by its 200-megapixel smartphone camera sensor, but it won’t be the first brand to put that massive sensor on one of its Galaxy phones. Instead, those bragging rights will go to Motorola, thanks to its upcoming X30 Pro flagship.

Taking to its official Weibo social handle in China, Motorola has confirmed that the X30 Pro will offer a 200-megapixel primary camera. Plus, it will be optically stabilized as well. The sensor size is 1/1.22-inch, which is not too shabby at all.

In addition to the exciting reveal, Motorola has also shared a glimpse of the upcoming phone, which appears to borrow the sleek side profile and curved display aesthetics from the Motorola Edge series of high-end phones. The only key change is that the selfie camera hole-punch cutout is now center-aligned, instead of being relegated to a corner.

Another notable design change is the rear panel, which appears to have a sandstone-like finish akin to phones like the OnePlus 10 Pro. The large camera lens for the 200-megapixel snapper highlights the camera island, and there are two more lenses underneath — most likely for ultrawide photography and zooming duties.

Packed to the gills

Slated to make its grand debut at an event in China on August 2 alongside the Moto Razr 2022 foldable, the X30 Pro appears to be a fully-loaded Android flagship. Motorola has also confirmed that its next top-tier offering will serve 125W fast charging support, which is simply among the best you can get in the Android segment.

Rumors suggest that the phone will draw power from Qualcomm’s top-of-the-line Snapdragon 8+ Gen 1 chip, paired with 12GB of RAM and 256GB of fast UFS storage. Moreover, the X30 Pro will reportedly offer a 6.73-inch full-HD+ OLED display with a 144Hz refresh rate and HDR10+ support.

The 200MP main camera is assisted by a 50MP ultrawide-angle shooter and a 12MP telephoto zoom camera. On the front is a massive 60MP camera, again one of the most powerful selfie cameras ever fitted on an Android phone.

A 4,5000mAh battery is said to provide the juice, while an Android 12-based custom skin called MyUI 4.0 will run things on the software side. Rumors suggest that the phone will be priced at EUR 899, which roughly translates to around $910 based on the current conversion rates.

The Motorola X30 Pro will launch in China on August 2, and based on the flagship sale strategy for its predecessor, it will likely make its way to the U.S. market in the coming months. It is great to see Motorola stepping up its game and beating the likes of Samsung and Xiaomi in smartphone innovation.

Samsung, on the other hand, is eyeing a 200-megapixel camera sensor for the Galaxy S23 Ultra slated for an early 2023 arrival. Xiaomi is also said to be in the camera race, but so far, we haven’t come across any reliable leaks regarding those plans. Interestingly, the Chinese smartphone maker went with a giant 1-inch sensor for its Xiaomi 12S Ultra flagship instead of cramming hundreds of millions of pixels on it.