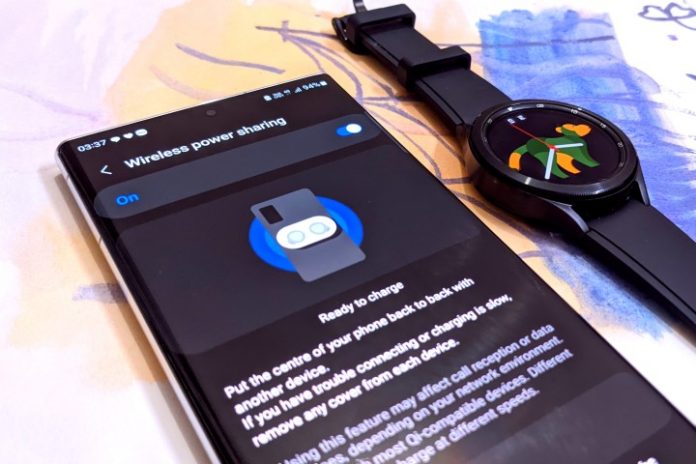 For all the slick Wear OS tricks and comprehensive fitness features that the Samsung Galaxy Watch 4 Classic offers, battery life is somewhat of a letdown. Even with an average day of usage involving continuous heart rate monitoring and GPS tracking for outdoor workouts, you will find yourself looking for the charging puck at the end of the day.

Samsung ships a wireless charging puck in the retail package. But this one takes about two hours to fully juice up the 46mm variant of the Galaxy Watch 4 Classic. That’s a bit too slow, considering the fact that smartwatches half its asking price — such as the divisive OnePlus Watch — take just about an hour to go from empty to 100%.

My point here is that you might want to buy an extra charger for your office desk, just to make sure it doesn’t run out of juice midway through a busy day. Thankfully, the Galaxy Watch 4 and Watch 4 Classic can be juiced up by a phone without any wire hassles. Just put it at the back of your phone, and watch the smartwatch trickle charge. But as convenient as that sounds, there are a lot of caveats.

The losses and gains

Let’s start with the charging speed first. Samsung offers a feature called Reverse Power Sharing on its phones that support wireless charging. Just enable it from the quick settings panel, put your smartwatch or earbuds case on the phone’s rear panel, and watch the energy transfer happen in real-time.

But the rate of power transfer is quite slow. I performed three test runs of the Galaxy Watch 4 Classic (46mm) being brought to life from 0% power to full charge, and it took the Galaxy S22 Ultra nearly three and half hours to do the job, on average.

Here’s the most recent breakdown of the charging process, conducted in a room at 75 degrees Fahrenheit, and both the devices lying still.

From the table, it might appear that charging the Galaxy Watch 4 Classic’s tiny battery sucks up nearly all the power from Galaxy S22 Ultra’s 5,000 mAh battery. But a healthy portion of that battery drain is due to tasks running in the background and idle battery consumption. Expect that number to be much higher for a phone with a smaller unit such as the Galaxy S22.

However, that rise in temperature is temporary and stays that way as long as the phone’s wireless charging coil is transferring power. Within 5 to 10 minutes, things return to normal. In a nutshell, heating was not an issue during the test phase.

A convenience burdened with caveats

The key takeaway here is that reverse power sharing is nothing short of a lifesaver for a Galaxy smartwatch running low on juice. If you have the patience to keep your phone and smartwatch untouched for an hour, you will get at around 20% to 25% power transferred to a compatible Samsung smartwatch.

That is enough to last a whole day, with some sacrifices. Disabling always-on display, lowering on-screen brightness, and pausing continuous heart rate monitoring are among the moves you need to make to pull through a whole day on just a quarter of a full tank. Or, you can simply enable power saving mode, which can net you two hours on just 5% battery.

Switching to the Watch-only mode, which only shows a digital clock and kills every other UI and sensor functionality, will last you about 23 hours with that amount of power. But you will need the discipline to leave your phone and watch still and untouched to get a meaningful amount of reverse wireless charging done in the first place.

If you’re at the desk, that won’t be a problem. But if you’re on the move, finding a stable surface to keep the two devices locked in place — especially with their smooth contact surfaces always trying to slip away — is quite a struggle. As I pointed out earlier, it’s a convenience plagued with caveats.

Standing out, but the wrong way

Unfortunately, that’s just the tip of the bad news iceberg. While slow charging can be forgiven, compatibility issues give a whole other meaning to the very convenience at hand. I’ll put it in clear terms – if you seek the facility of charging your Samsung smartwatch with a phone, you must have a Samsung phone.

It’s odd that a Xiaomi phone can charge Samsung’s earbuds, but not its smartwatch. Nadeem Sarwar / DigitalTrends

For better or worse, this weird charging standard situation for the Galaxy Watch 4 and its predecessors is a morbidly disappointing example of ecosystem locking. If you have a Samsung flagship, starting from the Galaxy S10 series, the Galaxy Note 10 family, or any of Samsung’s foldable phones, you’re safe.

Even for wireless charging accessories, Samsung mostly limits support to its own gear, like this power bank. Nadeem Sarwar / DigitalTrends

But it’s not just the phones where the charging standard fiasco proves to be an obstacle. It is quite likely that the third-party Qi wireless charger lying in your drawer won’t do the job unless it has the Samsung logo on it. Yes, there are third-party options, like this neat USB-C magnetic puck from Elebase, but they don’t come free.

I was not ready for this reality check

I started this whole test around reverse charging a Galaxy Watch using a smartphone out of pure curiosity. However, I ended up finding more problems with Samsung’s ecosystem than I was ready to digest. Samsung’s Galaxy Watch 4 is the top choice for Wear OS-based smartwatches, and its successors might well retain that crown.

But locking a convenience as crucial as reverse power-sharing behind an outdated charging standard is simply unacceptable. Even more so when so much of the smartwatch ecosystem has embraced the Qi wireless charging standard, as have Android smartphone makers.

Pushing the Galaxy Watch behind an ecosystem wall doesn’t make any sense. It is simply a step back for Samsung, a kick in the gut for the ecosystem, and a frustrating situation for users. I enjoy the perks of reverse power sharing, but that’s only because I have a pricey Samsung phone in my hands.