HomeNewsOne UI 4.5 is coming to the Galaxy Watch 4 to make...
News

One UI 4.5 is coming to the Galaxy Watch 4 to make typing less terrible 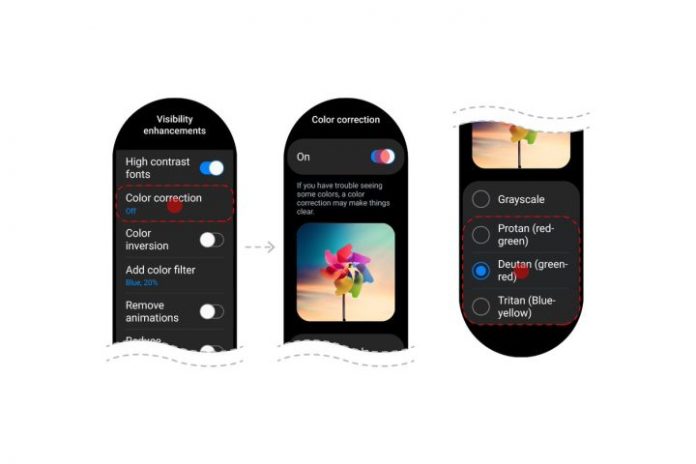 Samsung is bringing One UI Watch 4.5, its newest smartwatch OS update, to the Galaxy Watch 4 and 4 Classic in the coming months, the company announced today. Based on Google’s recently announced Wear OS 3.5, it’s set to debut with enhanced accessibility features, dual SIM support for phone calls, and a new and improved keyboard.

Samsung’s most helpful new feature is the improved typing experience. Previously, users were limited to using the Samsung Keyboard and its voice-to-text engine, a feature phone-style T9 keyboard, or downloading and using Google’s Gboard. Now, the default Samsung keyboard is getting an update to swap out the T9 keyboard for a full QWERTY keyboard with swipe typing enabled. You’re also now able to swap between input methods on the fly.

One UI Watch 4.5 will also see enhanced accessibility features for improved readability and more. A new high contrast and hue customization feature will be available, as well as reduced transparency, blur, and animation. For those who need auditory assistance, Samsung adds a new option that will allow for balancing sound between Bluetooth earphones in addition to the already existing live caption feature. Other accessibility changes include manual tweaks to temporary interface elements (think the volume slider and notification pop-ups) to stay on the screen once triggered.

Finally, support for making calls when paired with a dual SIM Galaxy phone and enhanced customization wrap up the updates. You’re now able to customize a watch face with multiple color options and save each color option as a discrete selection. A new favorites folder will let you quickly access your preferred watch faces.

Samsung also teased an upcoming Samsung Galaxy Watch which would come with 4.5 and even more features on board. The company didn’t say which watch that would be, but rumors point to the Samsung Galaxy Watch 5 and Watch 5 Pro. These are expected to come at Samsung Unpacked this  August, alongside the Galaxy Z Flip 4 and Z Fold 4.