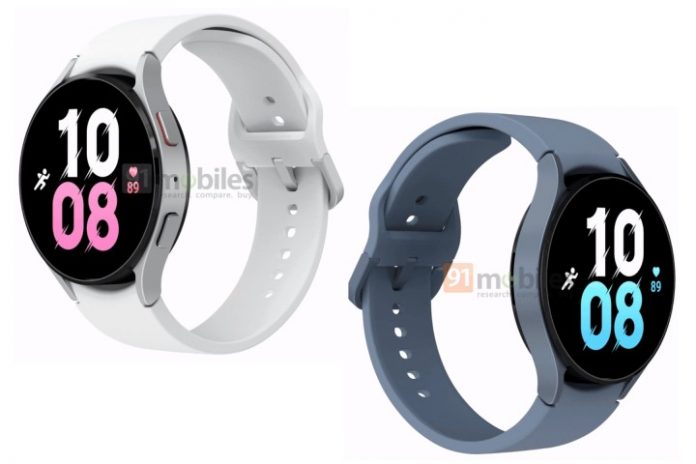 Samsung’s Galaxy Watch 5 series, which is lined up for an official debut at the as-yet-unannounced Unpacked event this summer alongside the company’s next foldables, has just been leaked from all angles.  The reliable Evan Blass (via 91Mobiles) has shared high-resolution animated renders of the Galaxy Watch 5 and its pricier Pro sibling, giving us our first alleged glimpse of the upcoming smartwatch duo in all its glory.

The Galaxy Watch 5 Pro will come in titanium grey and black colors, according to Blass. The leaked motion renders show only the 45mm variant, which can be seen flaunting a redesigned buckle system. It will reportedly hit the shelves in GPS-only and cellular variants, serving as a direct successor to the Galaxy Watch 4 Classic.

As for the vanilla Galaxy Watch 5, it is depicted in a trio of colors – silver, black, and blue – with matching strap colors and a familiar buckle contraption. It will also come in GPS and cellular variants, while there will be two sizes to choose from. One of them will be 44mm, while the case size of its smaller version remains shrouded in mystery.

A new version of Wear O, 3.5, will be paired with One UI Watch 4.5  on the software side. Not much has changed in terms of the core hardware design, with two buttons on the side and a familiar sensor assembly at the back. But there is one aesthetic tweak that fans won’t be psyched about.

Let’s address the elephant in the room. Just as the rumors had predicted, it appears that Samsung is ditching the rotating bezel control system with the Galaxy Watch 5 Pro. There is no seam to be seen alongside the round periphery, unlike the discernible ring gap visible on Galaxy Watch 4 Classic owing to its rotating bezel.

In a sea of smartwatches that rely on touch and button inputs, the rotating bezel of the Galaxy Watch 4 Classic offers an extremely convenient way of interacting with the UI. Be it scrolling past the home screen faces, going through the installed app library, or glancing over rows of workout metrics, the rotating bezel offers a joyful experience.

Compared to the tiny side crown on the Apple Watch or remembering which side button does what, the rotating bezel– accompanied by the good ol’ touch inputs – presents itself as one of the simplest methods of UI interaction that remains unmatched in the Android ecosystem. Or, the entire smartwatch segment.

One can argue that the merger of Tizen and Wear OS must have made things difficult for the rotating bezel, especially when it comes to creating functionalities around it for the thousands of apps available from Google’s store. But rather than sweating it out on per-app optimization, Samsung could’ve kept the rotating bezel limited to core Wear OS experiences.

I would have had no qualms with such a compromise, and neither would the loyal fanbase. But ditching it in its entirety is very disheartening, especially when such a notable downgrade happens with arguably the best smartwatch that the Android ecosystem has to offer.