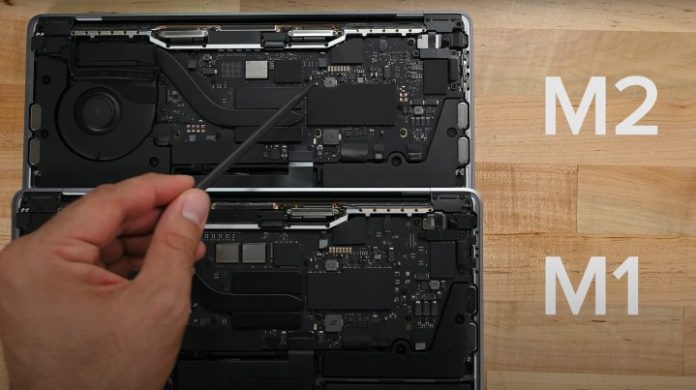 In a roughly five-minute-long video, the repair firm iFixit finds that Apple’s latest flagship 13-inch laptop with M2 Chip might be eerily close to the previous version, but with one small catch.

Overall, the teardown showcases that the new M2 MacBook Pro design isn’t all too different from the original MacBook Pro with an M1 chip. The chassis, touch bar, and display are all identical, along with the internal components like cables and grounding pins that connect them together. Only the logic board, and heat sync, are visually different, with heat sync having rounded corners on the M1 and the M2 having square corners.

iFixit also tried to swap out the logic board from an M2 MacBook and put it in an M1 MacBook Pro. The fit was perfect, and the machine with the M1 chassis and newly placed M2 chip did boot but it did not read the trackpad or the keyboard and Touch ID sensor. This suggests that Apple has some kind of software block to prevent swapping components, despite size considerations not being an issue.

“We find the decision to disable the trackpad and keyboard baffling, if intentional. The parts are clearly cross-compatible, and we’re again faced with what seems like an attempt to block repairs and replacements with software locks,” said iFixit during the teardown.

As for the documented read/write speed and performance issue with the solid-state drive onboard the new M2 MacBook Pro, iFixit confirmed what many suggested might cause the issue. The teardown confirms the choice of Apple only using one NAND chip on the M2 Macbook Pro’s solid-state drive, versus the two on the original M1 MacBook Pro. IFixit said that this makes perfect sense, and suggested this could be to the supply chain issue set forth by the global pandemic.

Overall, iFixit believes that the M2 MacBook Pro is a missed opportunity for Apple to have introduced an upgradeable device. This is not too surprising though, as Apple has been known to use software locks on components on its products. That’s why it launched the self-repair program, which lets users buy official parts and tools to repair their own products at home.