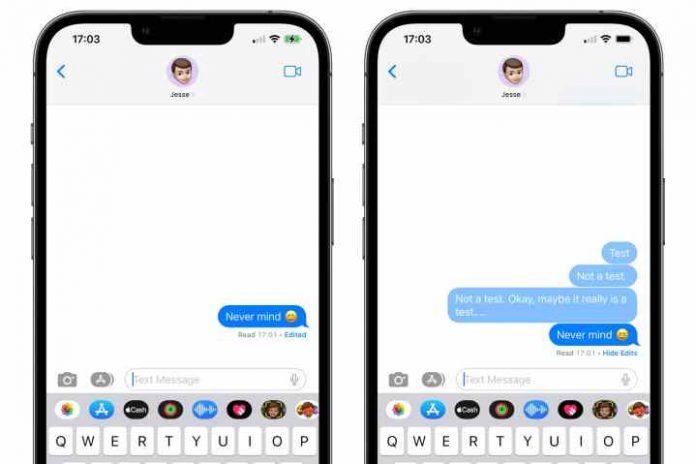 Apple has just released the fourth developer beta of iOS 16, and among the usual collection of bug fixes and performance improvements, the company has also taken some significant steps to help curb the potential abuse of its new iMessage editing feature.

When Apple unveiled iOS 16 at its Worldwide Developers Conference (WWDC) in June, it announced the update would bring the capability of editing and unsending iMessages sent through the Messages app. While this isn’t an entirely new feature — services like WhatsApp and Facebook have allowed folks to take back their sent messages for years — Apple’s implementation raised concerns among some domestic safety advocates.

With the release of the fourth developer beta of iOS 16, it appears Apple has taken those concerns to heart. The time frame to unsend a message has been reduced from 15 minutes to two minutes — the exact change that attorney Simpson Tuegel recommended. In a letter she sent to Tim Cook, the survivor advocate pointed out that “a sender of such a message, in most situations, will immediately realize the error,” so two minutes should be more than sufficient. More importantly, she adds, someone who intends to use iMessage “for bullying and harassment will face much greater risk if they know their messages become ‘permanent’ after two minutes.”

However, the two-minute window only applies to unsending messages. As of now, it’s still possible to edit a message for up to fifteen minutes after sending it, although Apple has come up with several ways to prevent potential abuse of the editing feature.

For one thing, it’s now only possible to edit a single message up to five times. After that, the “Edit” option disappears entirely. More significantly, the Messages app retains the original unedited message and each of the additional edits, which the sender or receiver can view by tapping the word “Edited” that now appears as hyperlinked blue text beneath an edited message.

Unsent iMessages don’t appear to be retained in any way — they’re gone for good. That’s understandable from a privacy perspective, as folks are likely to use the unsend feature to retract personal or confidential messages accidentally sent to the wrong person. However, the two-minute limit should reduce the potential for misuse.

In June, Simpson Tuegel — attorney and advocate for survivors of sexual harassment and sexual assault — penned a letter to Tim Cook explaining how unsending and editing messages in iOS 16 could “expose victims of violence to additional harassment and bullying.” In particular to “the significant amount of time allowed to edit or delete messages,” Simpson Tuegel said, an abuser could “send harmful content knowing they can destroy evidence of their misconduct.”

Yesterday I reached out to Apple CEO Tim Cook regarding the new iMessage edit/delete feature and my concerns about how the update could enable sexual abusers and harassers. I discussed the letter I sent and my proposed solutions with @nypost: https://t.co/w8q7hxXwP8

Although a victim would easily be able to take a screenshot of an offending message, Simpson Tuegel raised a valid point: “victims of trauma cannot be relied upon, in that moment, to screenshot these messages to retain them for any future legal proceedings.” She adds that this is especially true if the abuser is engaging in psychological warfare, effectively “gaslighting” their victim by covering up evidence and trying to make the other person think the problem is entirely in their own mind.

Simpson Tuegel sounded this alarm bell about a week after the first developer beta of iOS 16 was released. She offered several recommendations for how Apple could help mitigate the problem, including providing a notification when a message has been edited or deleted and reducing the time window in which a sender can do so.

It’s reassuring to see that Apple has seemingly taken that advice seriously and updated Messages accordingly with iOS 16 beta 4. It’s important to note, however, that these new features are only currently available in beta 4 for iOS 16’s developer beta. If you’re enrolled in the public beta, you’ll need to wait for a future update to see these changes.