HomeNewsI play PC games standing up, and you should too
News

I play PC games standing up, and you should too 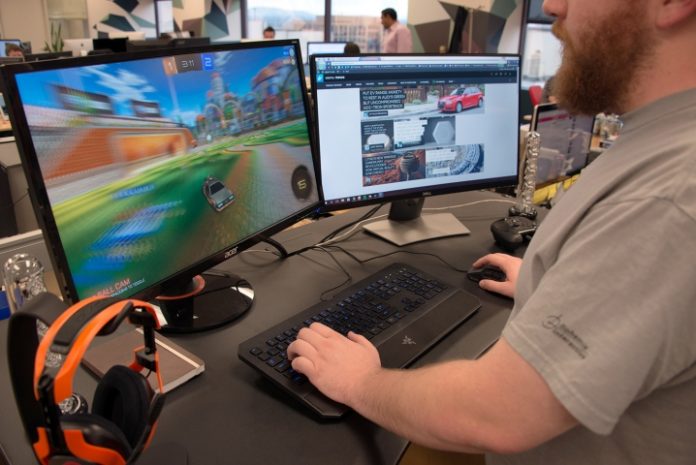 By almost any metric, I’m a decidedly average gamer. I might be good at building gaming PCs, but throw me into a modern competitive game and I’ll settle down in the middle of the pack, with a truly unremarkable kill-to-death ratio. One thing I very much do differently than anyone else I know, though, is that I play my games standing up.

And I think you should too.

Don’t let this 5’5″ journo look down on you from a standing desk and foam-topped rocker. Join me. Playing PC games standing up is great.

As a full-time writer and dedicated nerd, I could easily spend 99% of my work and leisure time sitting down. Whether I’m typing, watching, playing, reading, painting, or tabletop roleplaying, sitting is the default position for all of it, so unsurprisingly, I encountered my first adult mini-boss in my early 20s when I ran headfirst into chronic back issues.

Switching to a standing desk helped with that — immensely — as a number of studies have shown it should. What began as a stack of boxes piled haphazardly on a circular table I purloined from a long-shuttered café ended up as the much more indulgent Uplift V2. Whether I was using a jerry-rigged standing solution, or the nuanced and quiet motor-driven adjustable desk I have today, the benefits I enjoyed from switching my play time to standing instead of sitting have been dramatic.

My posture has improved, I’ve stayed fitter and healthier, and I’ve dodged some of the more unsavory health issues that have plagued my similarly aged and more sedentary colleagues. It even helped my mental health shortly after the birth of my daughter by letting my sleep-deprived mind drift off into the expansive wilderness of Valheim while I bounced her to sleep in a carrier.

This is basically me if I did more preacher curls. Raphye Alexius/GettyImages

It meant I could spend time with my wife too. Early in 2021, we were unable to leave our home outside of a brief dog walk due to pandemic lockdown measures, and with a sleeping newborn, we were passing ships in the wind. But with a standing desk that let me game while I kept my daughter from missing sleep — at least one of us was getting what we needed — my wife and I got to build the longhouse of our dreams and plan our next assault on Bonemass.

She talked, I typed, and most importantly, our daughter slept while we spent some quality time together; albeit virtually from a few rooms away. It was heavenly and only possible because I was standing while gaming.

Health- and marriage-maintaining benefits aside, though, playing your games standing up can also improve the physical layout of your game room. While you probably would — and probably should — take advantage of an adjustable desk to play while both sitting and standing, at least to start with, having your desk at near-chest height opens up a lot of room underneath for other things.

Usually have your PC on your desk? Stick it under there and enjoy reduced noise levels by putting several feet and a hunk of wood between you and the whirring fans — just ensure the cables are long enough to reach when the desk is at both sit and stand heights.

If you can leave your desk standing as a more permanent solution, you can even stick whole other pieces of furniture under it. Smaller desks and chests of drawers make great stands for unwieldy printers and scanners, or if you don’t have any small hands that’d grab at it, it’s not a bad place to store your VR headset and kit either.

Standing desks don’t have to be boring or utilitarian. This Herman Miller X Logitech design is classy, quality, and very “gamery.” Logitech

The problem with switching from sitting for long periods to standing for long periods is that it’s tiring. It takes a good few weeks or even months to adjust to the extra load it places on your body, and I’ve gone through several painful stages as my feet, calves, and lower back got used to the new work they had to do while I played. I’ve employed both rubber mats and a foam-coated rocker to ease the pressure on my feet, and I’ll occasionally throw on a pair of the deeply unfashionable Vibram FiveFingers shoes if I need a little extra help sidestepping plantar fasciitis.

I was also forced through my own eccentricities to conduct a severe cable-tidying routine. One of the downsides to a standing desk is that any spaghetti of wiring you have hiding under it becomes clear for all to see once you raise up the obfuscating desk. I’ve employed cable tidies, cable runners, and even a little duct tape to keep my wiring out of sight and out of mind.

I did have one panicked adjustment when my webcam cable proved too short and nearly ripped apart my desktop’s I/O, but it all worked out in the end.

Seriously, double-check your cable lengths at all heights.

Stand -up gaming doesn’t have to be for life

You don’t have to be a stand-up gamer to benefit from standing up while gaming. If you’ve ever felt good having a stretch in the middle of a multihour gaming session, you can already imagine the benefit from switching from sitting to standing, just for an hour or so. It gets you up and moving in ways that you just can’t while sitting, and that will have no end to benefits to your overall physical and mental well-being.

It’s certainly helped mine. My daughter no longer needs rocking to sleep as she once did, but my stand-up gaming routine has held strong. I appreciate it’s a niche obsession; It’s about as popular as my beloved toe-shoes. But if even a few of you give it a go, outing myself as that oddball who’s rocking back-and-forth while managing my Mount & Blade armies will have been well worth it.

Facebook
Twitter
Pinterest
WhatsApp
Previous articleAMD and Intel duke it out in the GPD Win Max 2, and there’s a clear winner
Next articleGarmin Forerunner 955 review: King of the road
- Advertisment -