HomeNewsGoogle Drive, Docs, and other apps are getting way better on Android...
News 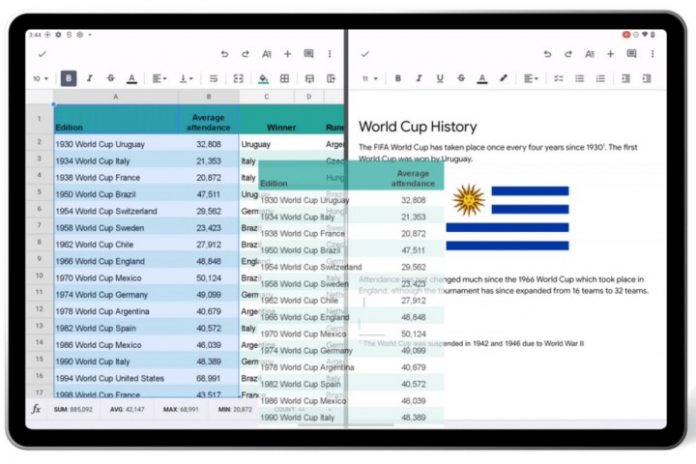 Google is bringing the desktop experience for its core Workspace apps to Android tablets, adding some much-needed productivity flair. The changes, which come in the wake of announcements made at I/O earlier this year, are targeted at improving the split-screen multitasking experience after laying down the foundations with Android 12L.

The first and most important change is the ability to drag and drop images from an app running in one window to another app running side by side in a second window. Google says the Chrome browser and Workspace apps like Sheets will support the drag-and-drop trick for Docs and spreadsheet cells, among other services.

Images stored in the Keep Notes app can also be dragged and dropped into other apps such as Gmail. From the press assets shared by Google, it looks like you will also be able to move a table from Sheets to Docs, and drag-and-drop an image from a Docs file to a Sheets cell open in another window.

Drive is getting some extra love from the folks over at Google. When the cloud storage service is open in one window, users can tap on the context menu of a file and have it open in another window. For example, you can view a photo or video in another window, saving you the hassle of moving back and forth between Drive files in the same window.

One of the most frustrating parts about using an Android tablet as your primary computing machine is the shortcut scene. Or, to put it more accurately, the lack of it — even if you are using the same Google apps across your Android tablet and Windows PC or Mac. That is finally about to change.

Google says you can now effortlessly punch your way through basic shortcuts for tasks such as copying, pasting, selecting, undo, and redo when your tablet is connected to a physical keyboard. The company says you can expect these keyboard shortcuts to work across Drive, Docs, and Slides.

The aforementioned changes are quite promising. Even though they are still far away from bringing Android’s tablet experience to parity with iPadOS, they are still a good start toward a less frustrating experience with doing serious work on an Android tablet.

However, you might have to wait a bit for these features to start working on your Android tablet. Google says its tablet-centric Workspace updates will be rolling out over the next few weeks. Thankfully, there is no distinction between free and paid Workspace users, as the changes will be rolled out for every user with a Google account.

Unfortunately, one of the most powerful productivity hacks that Chrome users have long been yearning for – Chrome extension support – is still nowhere in sight. Extensions are an integral part of the daily workflow, and they could truly take the work experience on an Android tablet to a whole new level. For now, though, they still aren’t here.

But even without Chrome extensions, the upgrades Google is rolling out do look very promising. The Android tablet experience has been in need of upgrades like this for a long time, so to finally have them be made available is a great step in the right direction.