When shopping for a projector, you’re often presented with a few different categories. There are ultra-portable models like the Anker Capsule II that sacrifice brightness and resolution in favor of convenience and portability. Then there are projectors that try to strike a balance between quality and portability, such as the Viewsonic M2e that I reviewed last year. Finally, we have the Benq TH685P, a cinema-focused projector that is more suited for a dedicated media room in your home that was sent to us for review. 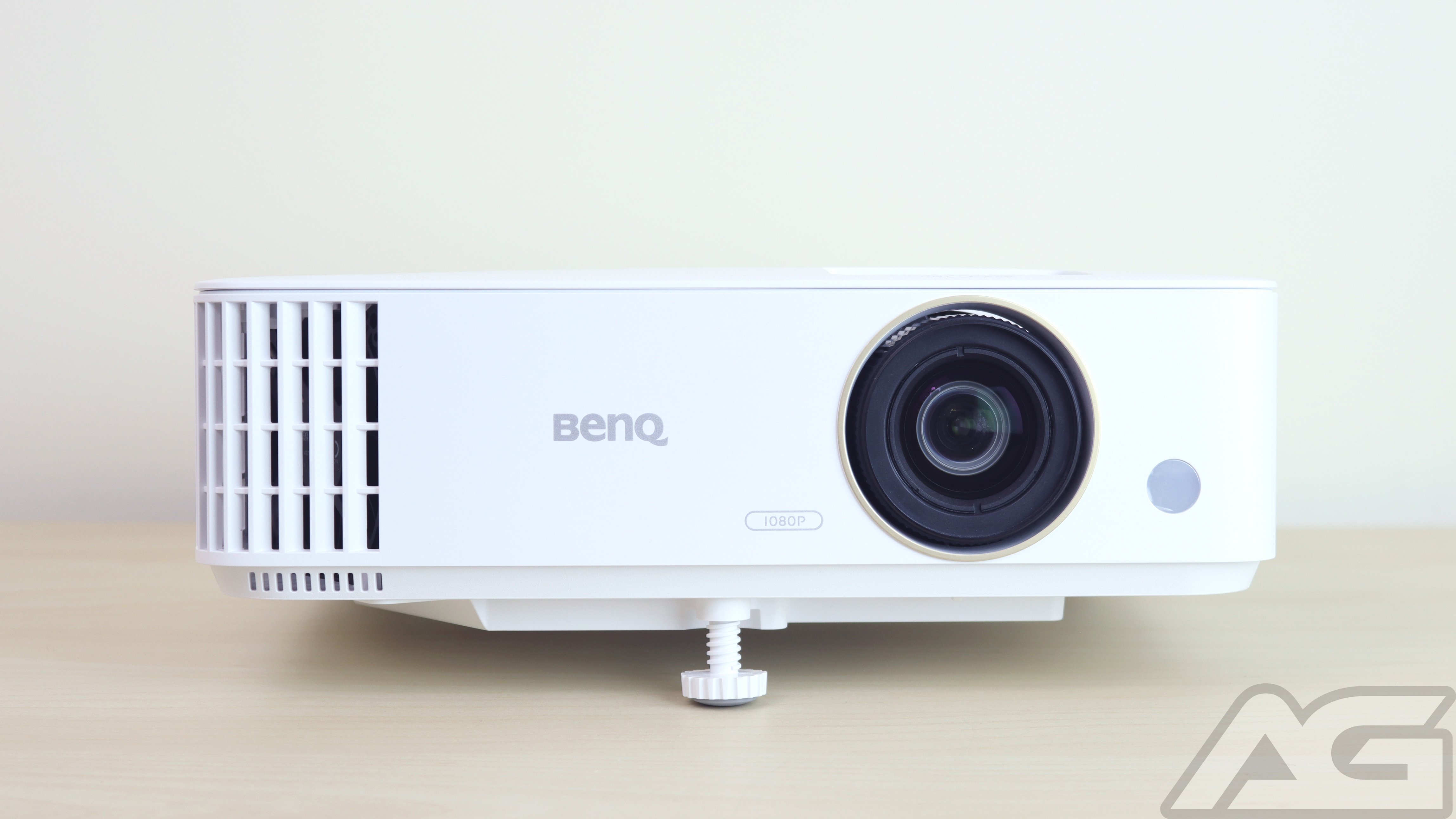 The Benq TH685P is fairly large measuring 12.28 x 8.56 x 4.33 inches, however, it is surprisingly lightweight, and it features multiple ways to mount it. Whether you want to use the holes in the bottom to mount it upside down from the ceiling, or put it behind a screen and project the picture from the back. There’s also the more traditional and convenient way, by placing it on a table and using the three adjustable feet to angle and level the picture out. 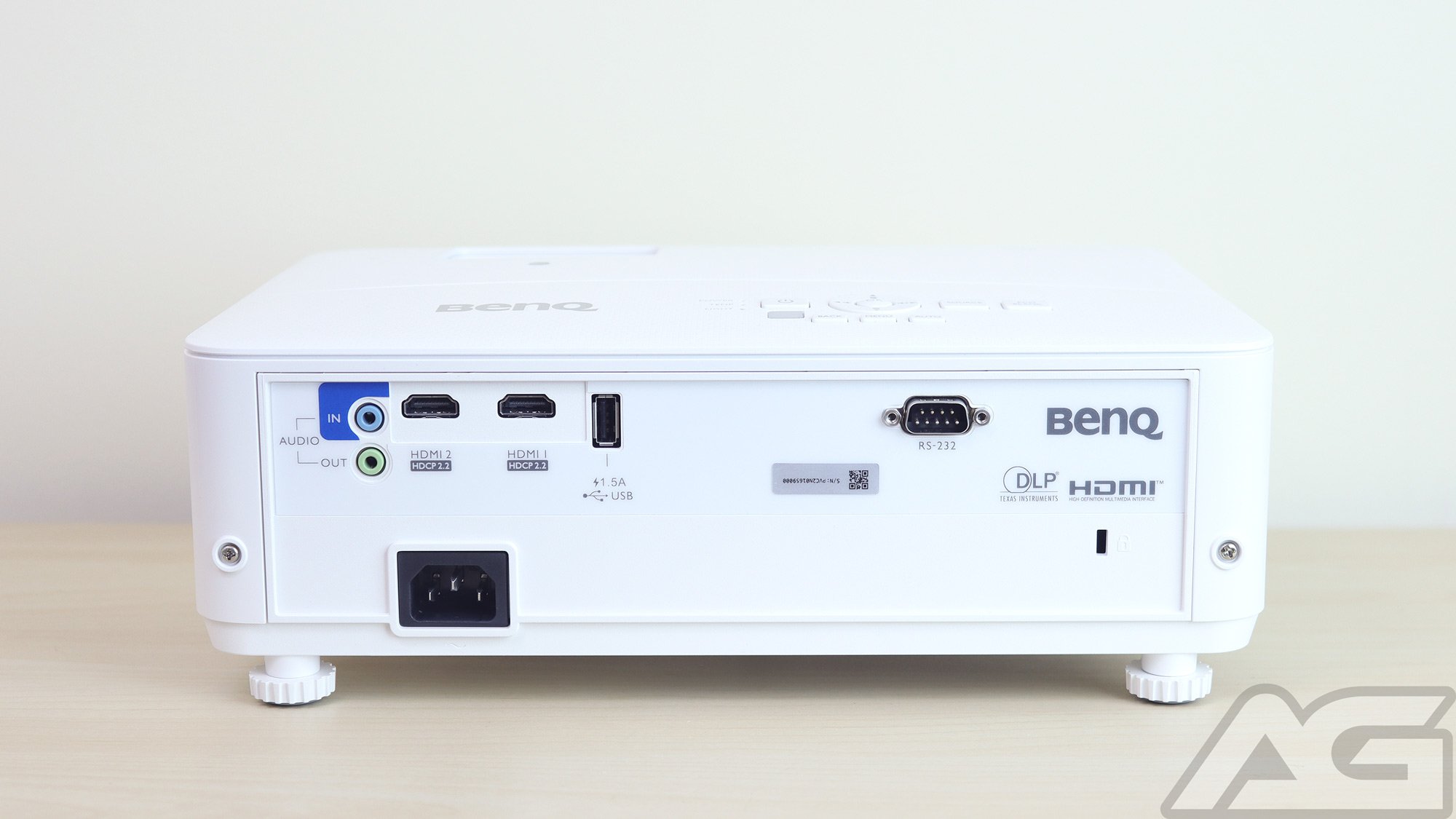 As far as ports go, the TH685P includes two HDMI 2.0b HDCP 2.2 ports on the back for connecting a streaming dongle, Blu-ray player, console, and more. Along with HDMI ports, is an audio input and output jack, both of which are 3.5mm, and a 1.5A USB Type-A input that can be used to power a streaming dongle. Unfortunately, that’s not enough power to stream 4K HDR with most dongles, so you’re going to need to power it separately if you want the best quality.

Located on top of the Benq TH685P are all of the controls you could ever need to navigate menus or control playback. 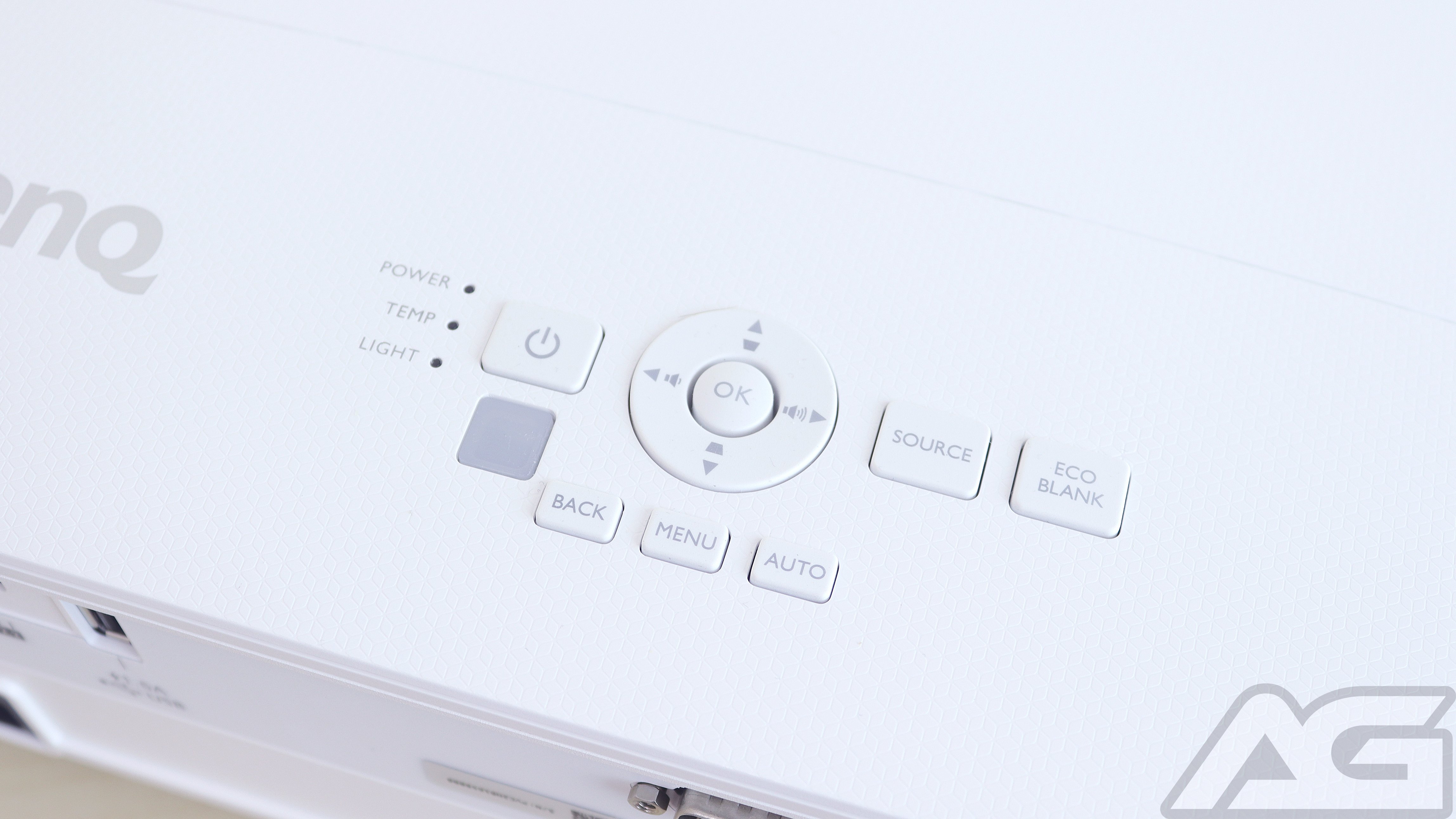 Additionally, there are two rotating dials located near the lens of the TH685P. One of these is used to adjust the zoom, a feature that is very helpful for getting the picture just the right size without the need to move it back and forth constantly. 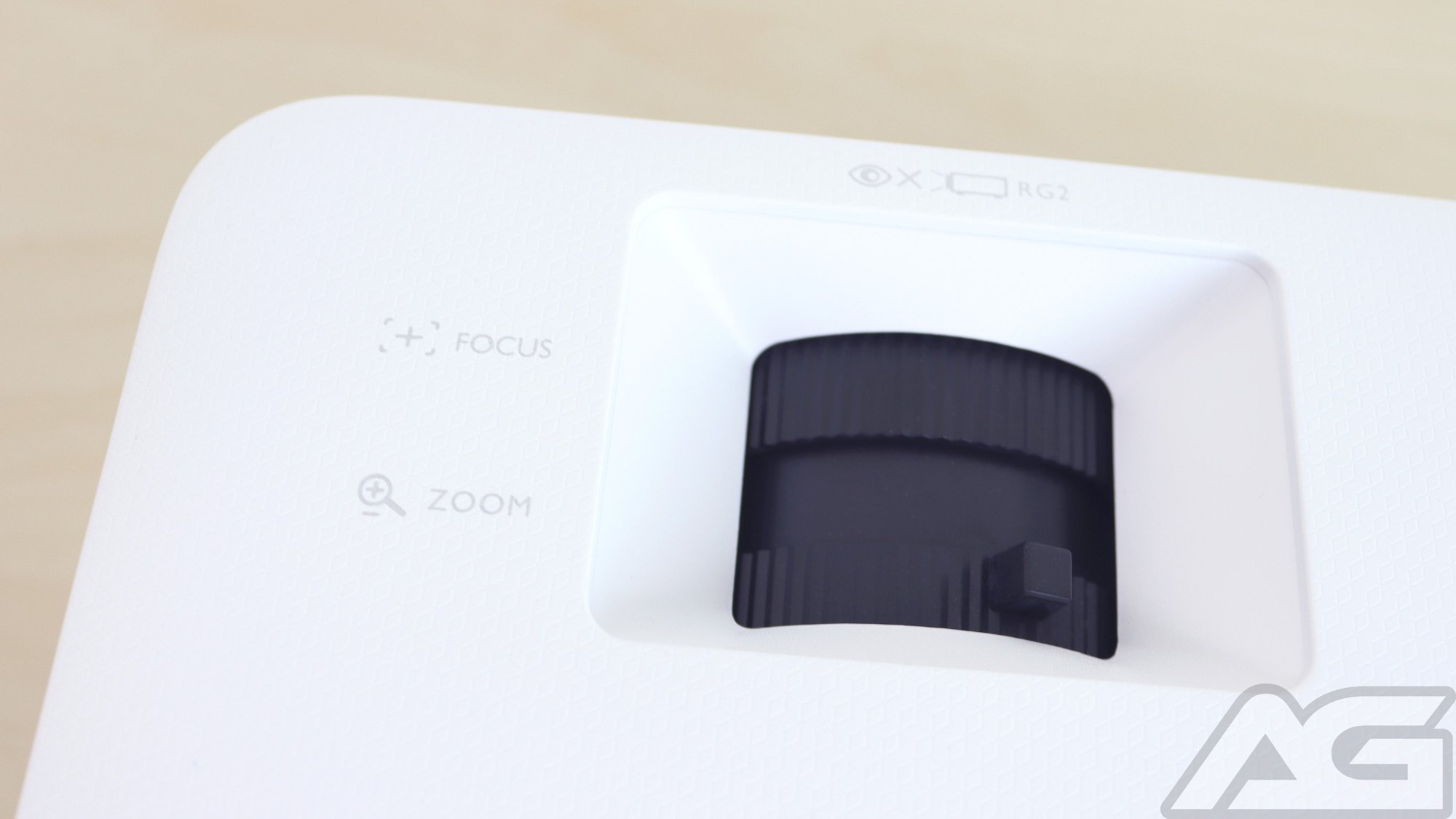 The second dial is used to focus, and I found it a little difficult to make precise adjustments due to how stiff the focus ring is, however, this is something you’ll be setting up once, and hopefully not touching again. At least there won’t be any danger of it slipping accidentally, although, it would have been nice if Benq had built-in autofocus.

The TH685P is essentially a dummy display, and by that, I mean there is a minimal interface with no smart apps or way to view content without additional input. This means a streaming dongle, Blu-ray player, console, or some other input source is required.

You might think this is a strike against the TH685P, but you wouldn’t be thinking that if you had tried some of the software I’ve experienced on other projectors. The software is often a half-baked attempt that is barely useable, and you end up plugging in a dongle anyways to escape the limited selection or broken apps. Benq has simply saved you some frustration here by giving you no choice but to connect a video source. 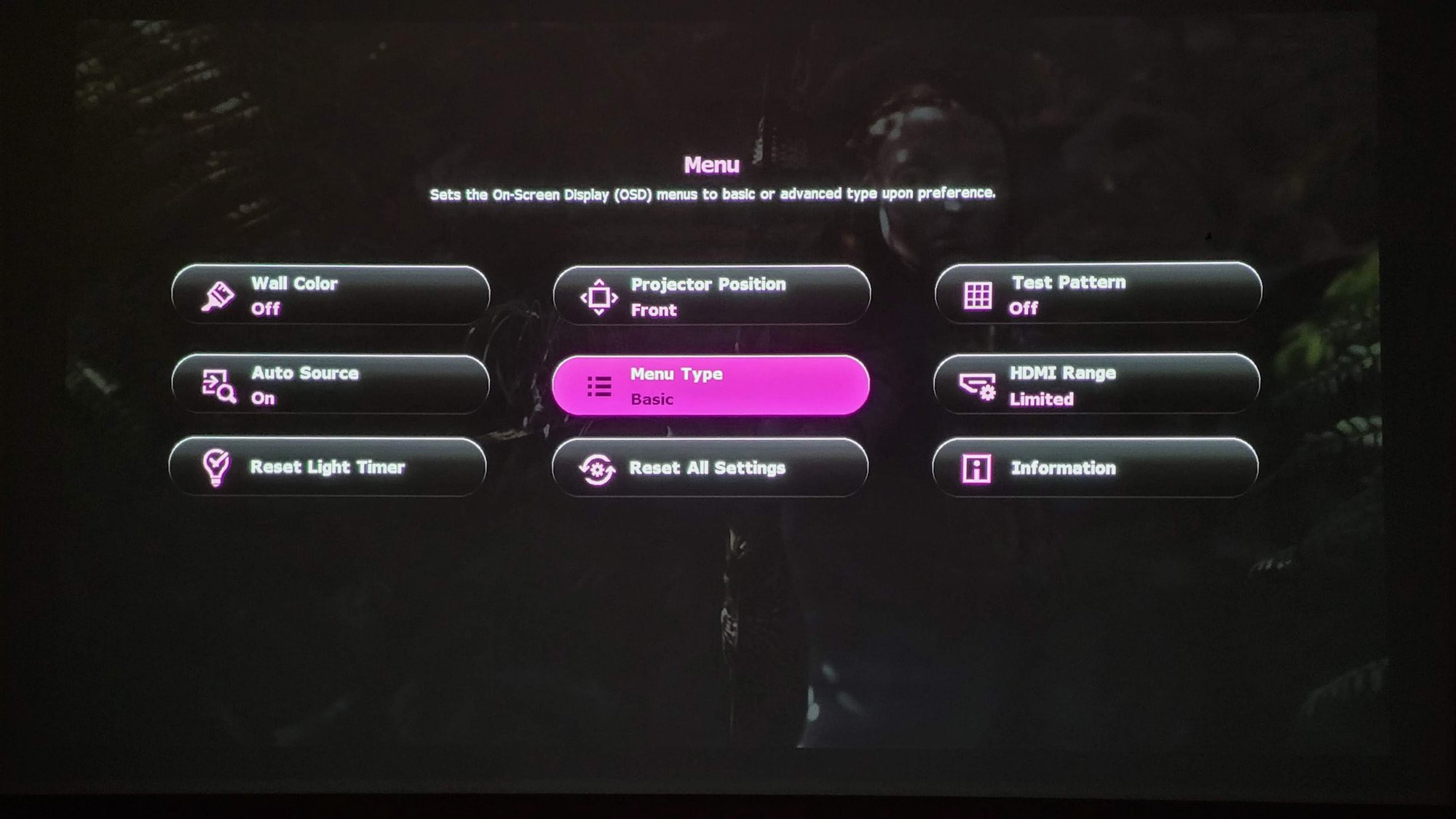 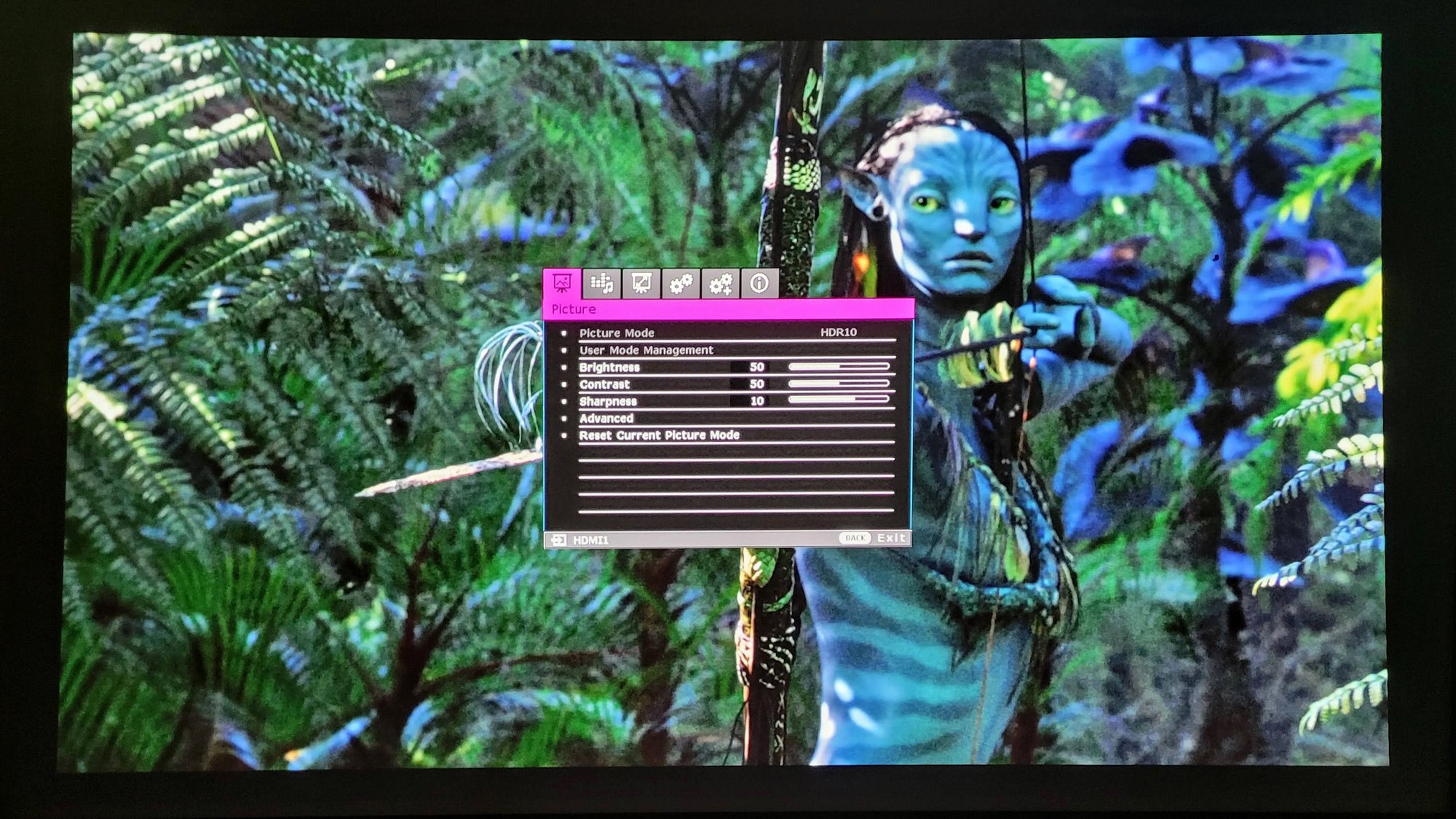 What the TH685P lacks in smart features, it makes up with plenty of options for customizing your viewing experience. You can access these via the menu using the controls on top of the projector, or by using the included remote. The menu offers two different interfaces, a basic one by default for those of you who like to keep it simple, and a more advanced interface for those of us who like to dig in and really tweak the picture quality. You can even adjust the color output depending on the color of the surface you’re projecting on. 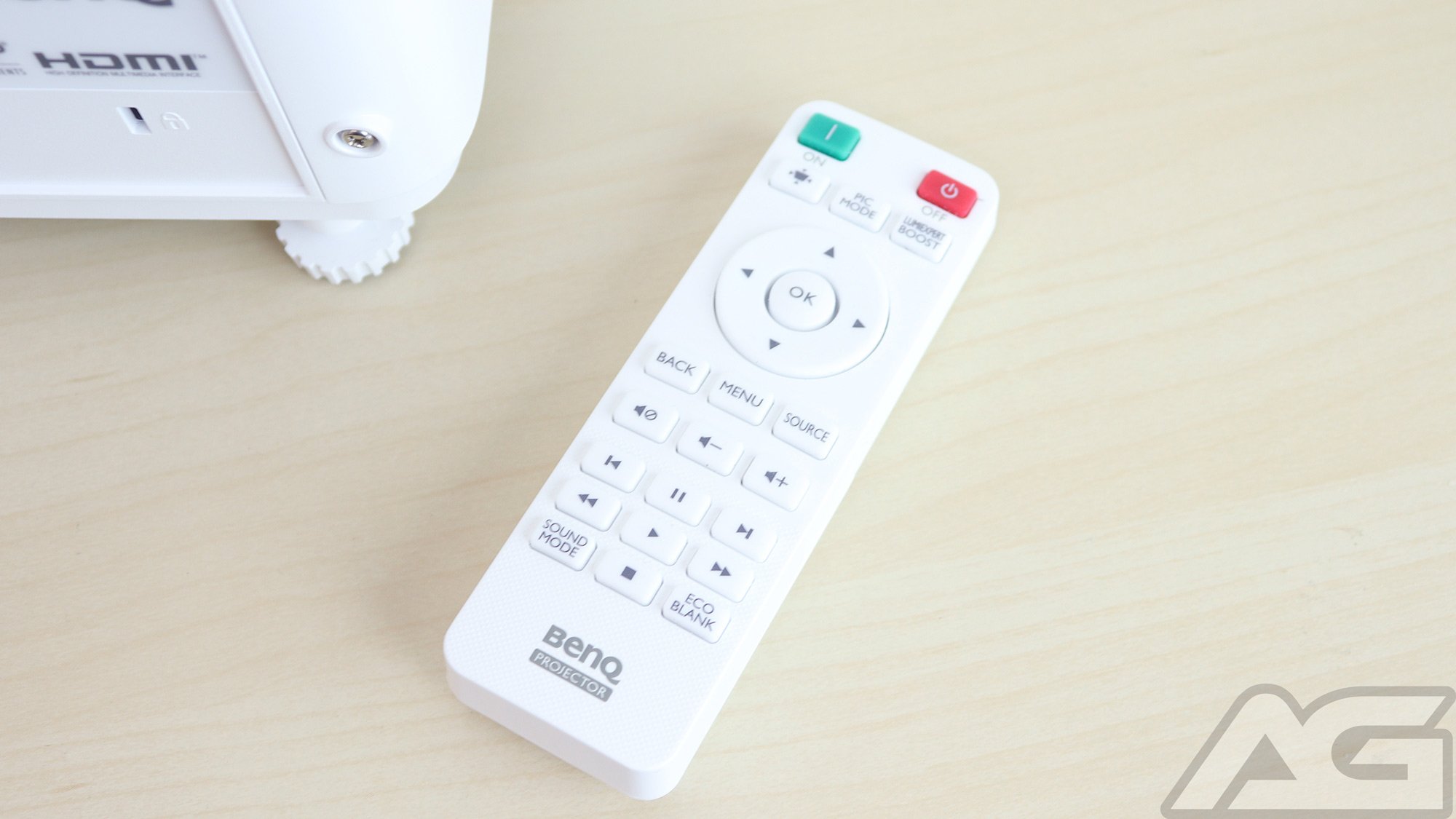 While the remote works great for powering the projector on/off, adjusting the volume, changing picture settings, switching sources, and browsing menus—that’s about all it can do. Despite having buttons for playback controls, I was unable to control my Chromecast Ultra or PS5 while watching content. Just something to be aware of. 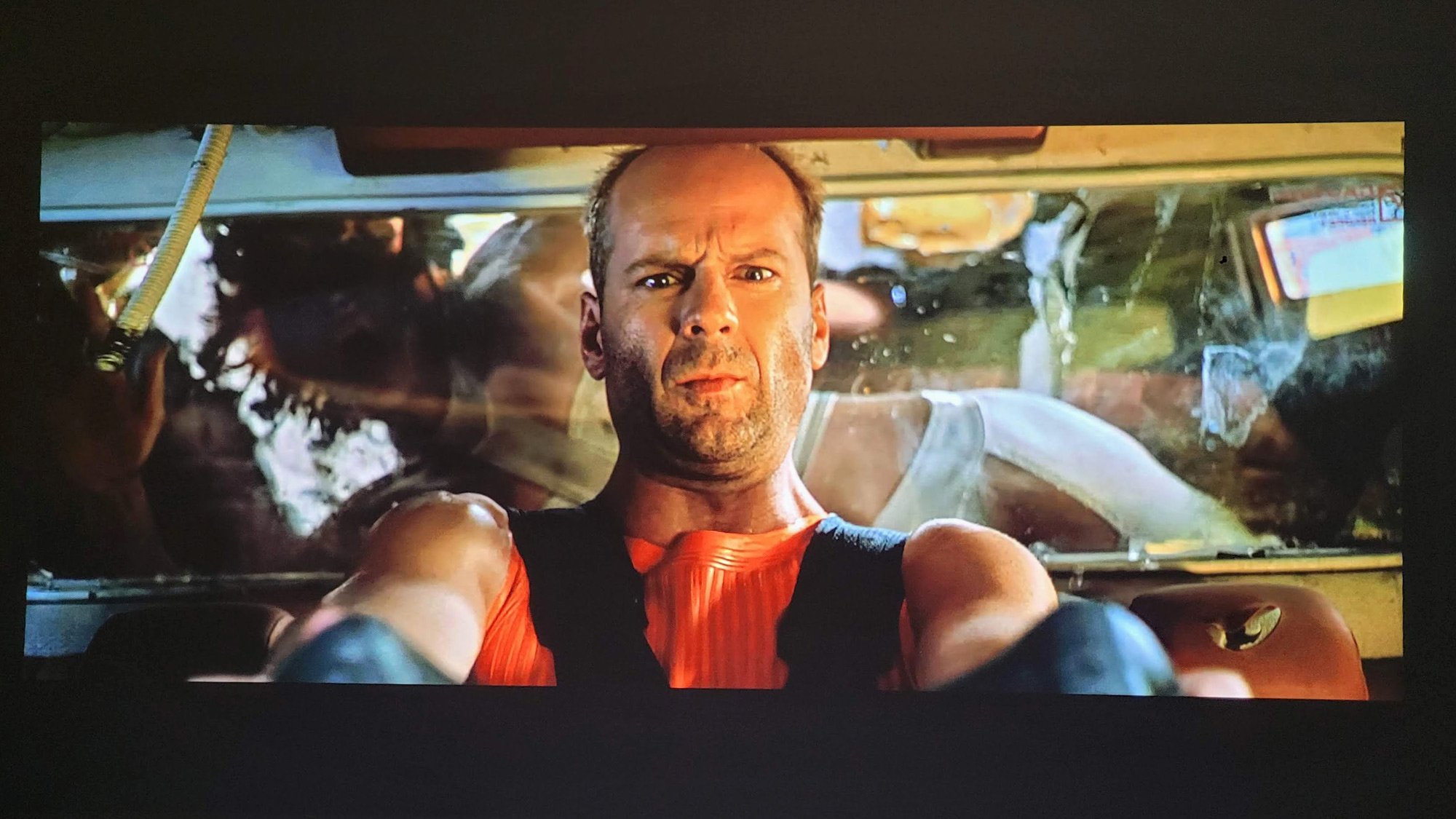 Coming from a 65-inch 4K TV, I wasn’t expecting much out of the TH685P’s 1080p output, especially when projected on the wall at nearly double the size. However, I was completely blown away by the clarity of the 1080p picture. What made it even more stunning, was how incredibly bright it is with 3500 ANSI lumens, it even made it possible to use during the day. Although, it looks much better in a dark room. Furthermore, the saturation and dynamic range from the HDR10 support makes movies and games look incredible.

Speaking of gaming, the Benq TH685P’s prime selling feature is the 120Hz refresh rate and 8.3ms low input specifically for gamers. I had a blast playing games blown up on a 100-inch screen without feeling any lag. 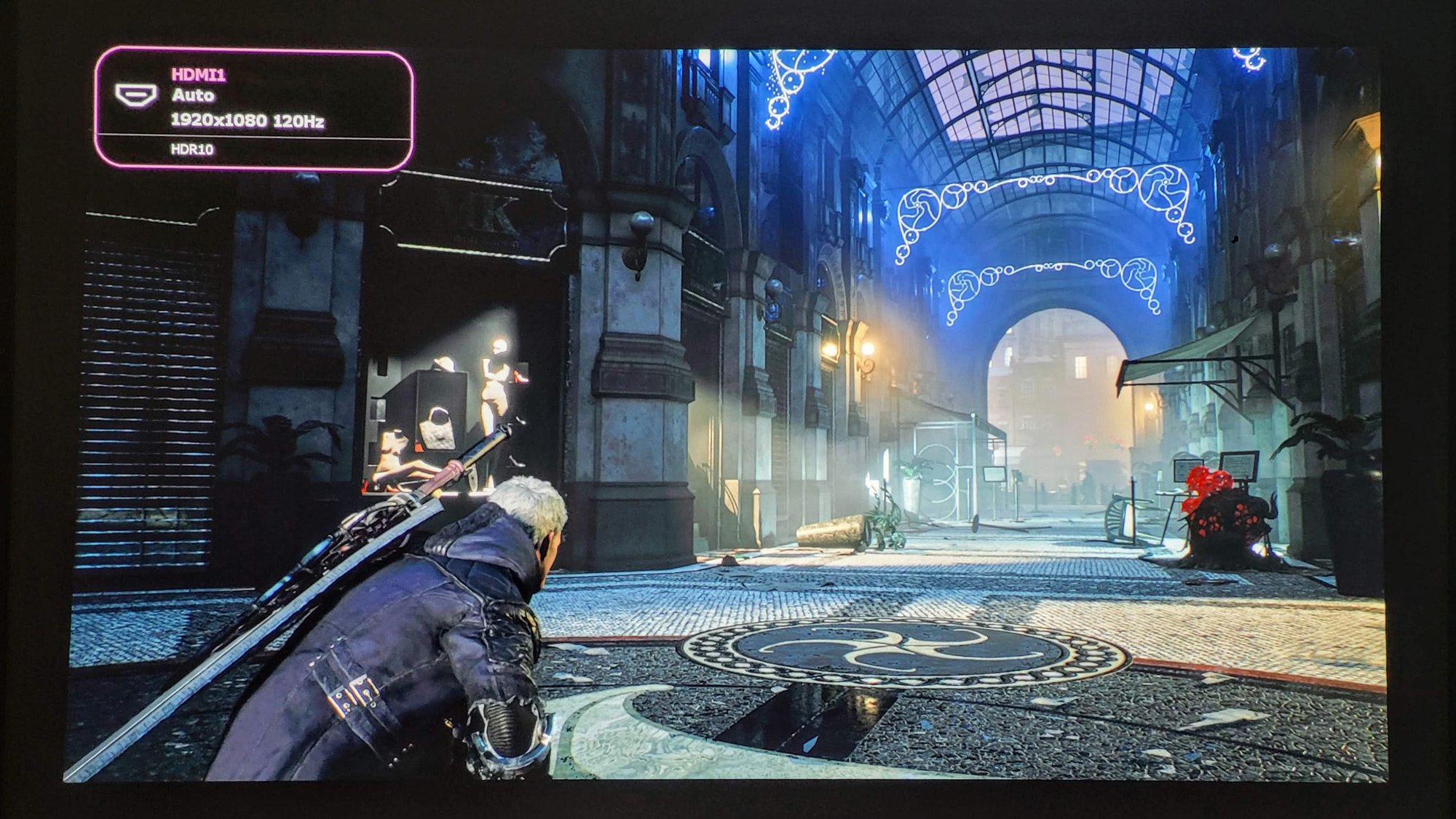 My only criticism of the picture quality, comes from something known as the rainbow effect. It’s an issue with certain projectors where you’ll notice red or green pixels popping up on the screen during some scenes. I only noticed this around 10% of the time while using the TH685P, and only with certain films I watched. It seems some movies are more prone to triggering this effect than others, however, I don’t recall seeing it while gaming.

This is one of those issues, where some people may not notice the split second it pops up on the screen, while it will drive others crazy. Personally, I wasn’t too thrown off by it, but it was noticeable and worth mentioning if you’re considering purchasing the Benq TH685P.

Typically, I watch movies either using a 5.1 surround sound setup or a soundbar. I don’t expect much from TV speakers, let alone a tiny projector speaker. That’s why I was completely shocked the first time I watched a movie with the TH685P. I was in awe of the depth and separation of the sound coming out of this tiny speaker inside of this little box.

Granted, the sound would be better if you used a 5.1 system or a soundbar, but if you don’t have one of those already, I think you’ll be pleasantly surprised at how good the TH685P sounds. I know I was.

It also has plenty of volume to combat the sound of the fan, which is, unfortunately, pretty loud. That’s par for the course with projectors in my experience though. Especially ones with such bright bulbs in them. 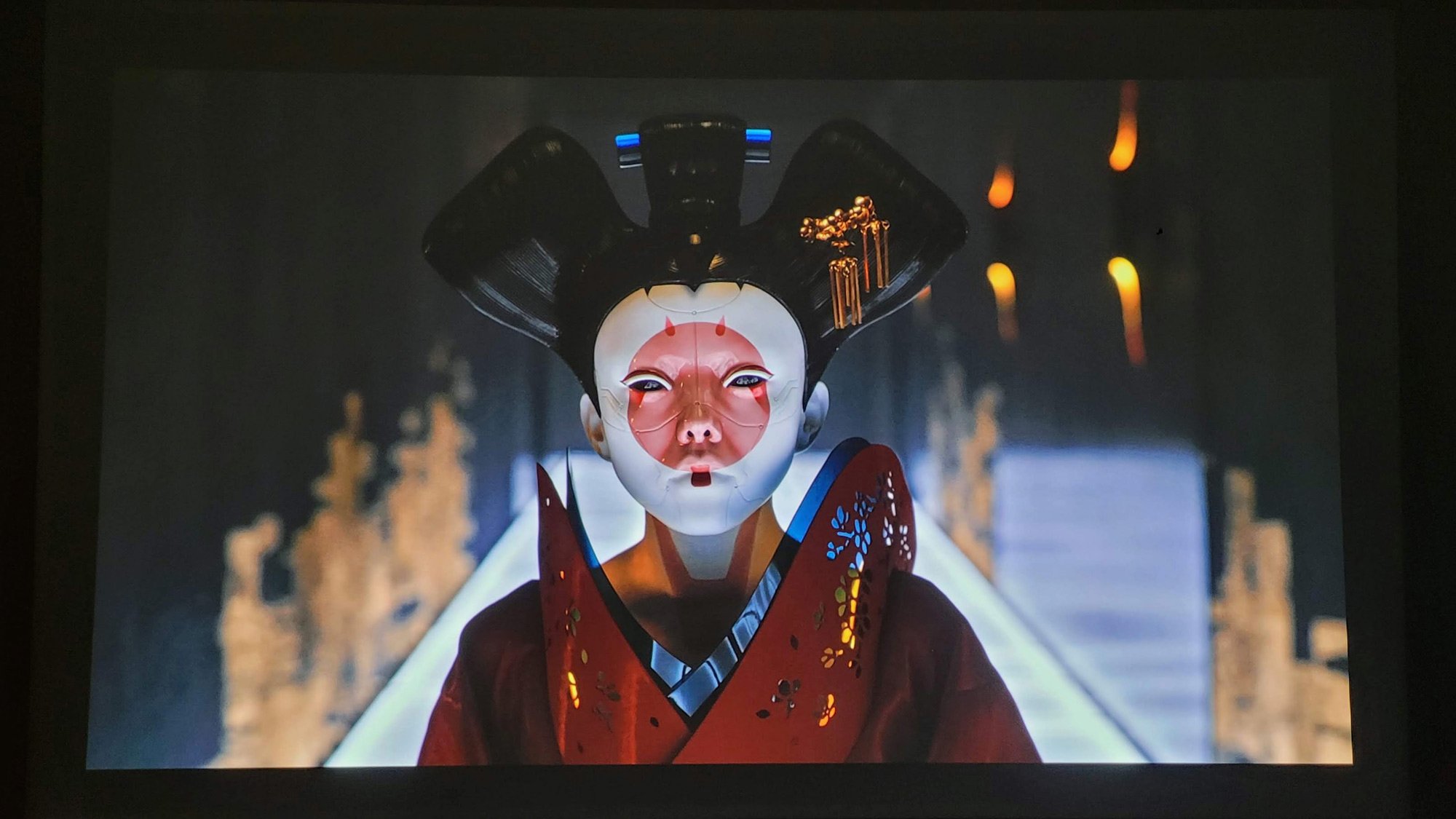 There is a lot to love about the Benq TH685P. It has a stunning bright saturated HDR picture thanks to its 3500 ANSI lumens output, which can reach up to 100-inches at 8.2-feet away from the wall. The speaker also sounds fantastic for how compact it is. Plus, it has been geared for next-gen gaming with a 120Hz high refresh rate and a latency of 8.3ms.

At the same time, the TH685P also has a loud fan and puts out a lot of heat, along with a slight issue with the rainbow effect that’s common in some projectors. As with most products, there are always pros and cons, the Benq TH685P tends to have more in the pro column for me, and makes for a great addition to your media or gaming room setup for $800.

Buy from Amazon Buy from Benq