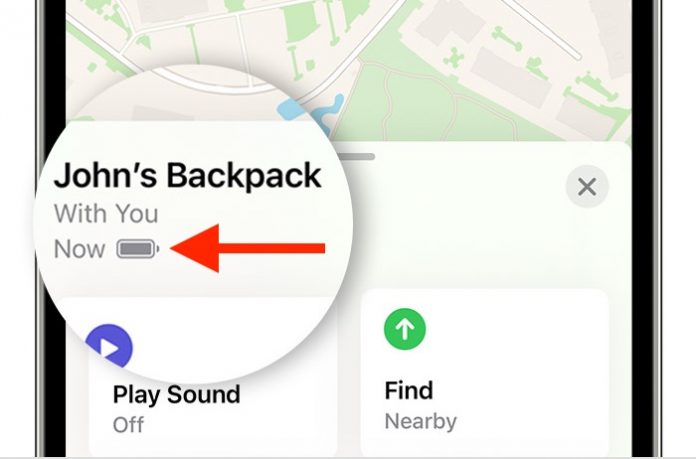 In iOS 15.6 and the latest iOS 16 beta, Apple appears to have intentionally removed the AirTag battery indicator in the Find My app.

In previous versions of iOS, a small battery icon, similar to the iPhone battery status, appears below an AirTag’s name and location when the AirTag card is opened in ‌Find My‌.

While not accompanied by a percentage, the icon provided an approximate indication of the battery level of an AirTag, and when the level became very low, the battery icon would turn red and the user would receive a notification to replace the battery.

In iOS 15.6, the notification is still sent to the user, but the general battery level icon is absent unless the battery is critically low. This seems to be an intentional move on Apple’s part, since the same indicator has also been removed from ‌Find My‌ in the latest macOS Monterey 12.5 and watchOS 8.7 updates.

Not only that, in an updated support document on how to replace AirTag batteries, Apple has also removed a specific reference to the battery icon in ‌Find My‌, suggesting users should check for a Low Battery banner warning in the AirTag card instead.

Image credit: iCulture.nl
Dutch blog iCulture.nl, which spotted the battery icon’s absence, speculates that Apple has removed it altogether because of persistent problems getting the indicator to display correctly. In some cases over the past year, the battery would display as empty, when in fact that was far from the case.

So it seems that, going forward, unless Apple reverses the change, users won’t be able to check on the battery status of their AirTags and will simply have to rely on a low battery notification when it’s time to replace it. Tags: Find My, AirTagsRelated Forum: AirTags
This article, “Apple Removes AirTag Battery Level Indicator From the Find My App” first appeared on MacRumors.com