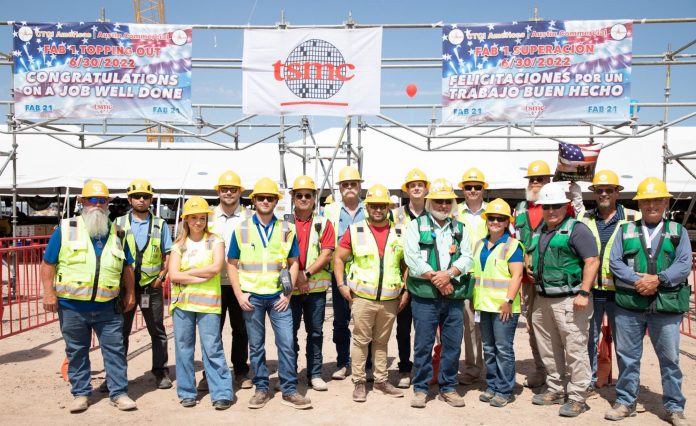 TSMC’s topping-out ceremony in Arizona
The $12 billion factory will be the first of its kind to mass-produce 5nm chips in the United States. All of Apple’s latest chips, dating back to the A14 Bionic and M1 chip, are fabricated with a 5nm process. In a post on LinkedIn, TSMC said:

Great progress continues on our 5-nanometer semiconductor fab – “FAB 21” – in #Phoenix, #Arizona. We recently celebrated placing the last beam – also known in the construction industry as a “topping” milestone – in FAB 21’s fab building with our local partners. Over 4,000 attendees were on hand to enjoy this important moment including our own employees and partners. #TSMCArizona is on time and on track to bring the most advanced leading-edge semiconductor technology to the U.S.. We are deeply grateful to our partners and look forward to more successful milestones in Arizona.

Last year, TSMC Chairman Mark Liu announced that the company’s Arizona plant will begin mass production in the first quarter of 2024. Likely clients for the chips made in the Arizona factory include Nvidia, Qualcomm, and Apple. The new Arizona plant will make it theoretically possible for Apple’s 5nm custom silicon chips, to be manufactured within the United States for the first time.

Apple is rumored to move its custom silicon to a 3nm process starting with the M2 Pro or M3 chip. The iPhone 14 Pro’s A16 chip is expected to continue being made with a 5nm process, so it is highly likely that Apple will still need a supply of 5nm chips from TSMC by early 2024 when the Arizona plant opens for mass-production.

TSMC’s main factories are located in Taiwan, but it already operates a factory in Camas, Washington, as well as design centers in Austin, Texas and San Jose, California, meaning that the Arizona facility will be its second manufacturing site in the United States. Yesterday, it was reported that Apple is opening a new development site in Israel to develop future custom silicon chips for the Mac.Tags: TSMC, digitimes.com, Arizona
This article, “Apple Chip Supplier TSMC Celebrates Arizona Factory Nearing Completion” first appeared on MacRumors.com