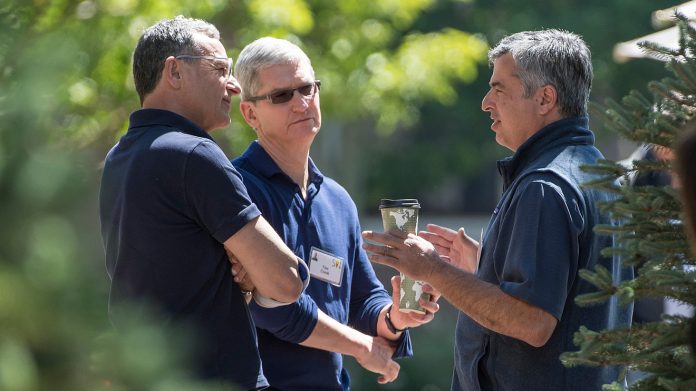 Apple CEO Tim Cook is on the guest list for this year’s Sun Valley Conference, which begins Wednesday in the resort town of Sun Valley, Idaho, according to Deadline. Known as “summer camp for billionaires,” the conference allows tech and media moguls to negotiate deals between leisure activities like golfing and whitewater rafting.

Cook (center) at the 2016 Sun Valley Conference (via Bloomberg News)
Cook has attended the retreat several times over the years, often alongside Apple’s services chief Eddy Cue, but it has yet to be confirmed if he will be present this year. Apple’s negotiations have typically been kept under wraps, but the conference provides the company with an opportunity to secure media deals for services like Apple TV+.

Hosted by investment bank Allen & Company, the conference has served as a catalyst for some major deals in the media industry, ranging from Disney acquiring ABC in 1995 to Amazon founder Jeff Bezos’ purchasing The Washington Post in 2013. This year’s event reportedly takes place from July 5 through July 9, with private discussions to begin July 6.Tag: Tim Cook
This article, “Apple CEO Tim Cook Among Tech and Media Elite Invited to Sun Valley Conference Later This Week” first appeared on MacRumors.com