HomeNewsAMD and Intel duke it out in the GPD Win Max 2,...
News

AMD and Intel duke it out in the GPD Win Max 2, and there’s a clear winner 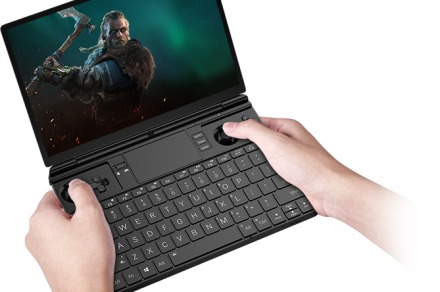 GPD Win Max 2, the recently announced upcoming gaming console/handheld laptop hybrid, was just tested in a series of rather extensive benchmarks. Seeing as the GPD Win Max 2 comes in two variants, one with an AMD processor and one with Intel, both of them were compared to each other.

Sometimes, benchmark results can be inconclusive, but this time around, the winner is very clear to the point of it almost feeling unfair. AMD scored a resounding victory, but is there any hope for redemption for the Intel version of the console?

In case you’re confused, the GPD Win Max 2 is an interesting device that started as a project on Indiegogo and is now estimated to start shipping in September 2022. It’s a gaming handheld — you might call it a console, only it’s more like a handheld mini laptop, because you can also use it to send emails and do things other than just plain gaming. However, most people are likely to use it for gaming purposes, and for that reason, the GPD Win Max 2 has a built-in controller that sits above the keyboard. The screen measures 10.1 inches, so the device is not unwieldy, but it still offers plenty of screen real estate due to the ultra-thin bezels.

What’s perhaps more interesting is that the console/laptop hybrid comes in two variants: One with an AMD Ryzen 7 6800U APU and one with an Intel Core i5-1260P. This brings us to today’s benchmarks, wherein both the devices were compared extensively in order to determine the winner. Spoiler alert: It was hardly even a contest.

YouTuber The Phawx (Cary Golomb) got his hands on the two Win Max handhelds and then proceeded to put them through hours of benchmarks. Based on the charts, the AMD version of the console is often twice as good as the Intel option. Intel does manage to shine in single-threaded workloads, but AMD wins in both multi-core tasks and in terms of graphics performance. As per Golomb’s tweet, Intel is “just getting slaughtered.”

Look I don't know who needs to hear this, but if you were buying a GPD Win Max 2 in a few hours, please only get the 6800U. Intel does have some slightly faster single threaded. but goodness gracious it's just getting slaughtered. pic.twitter.com/GtEoaBXGde

It’s hard to deny that the RDNA 2 GPU bundled within the Ryzen 7 6800U truly shines in these tests and it certainly manages to impress in a handheld/small device scenario. The GPU has 12 compute units, while the GPU inside the Core i5-1260P delivers fully enabled Xe-LP graphics — that’s 96 compute units. However, AMD still defeats Intel here due to the efficiency of the architecture it uses in its APUs.

Aside from pure performance benchmarks in games such as Borderlands 3 and Cyberpunk 2077, Golomb also tested the power usage versus frames per second (fps) on the AMD version of the handheld based on the number of cores enabled during the test. Below 15 watts, the octa-core configuration proved to be superior, but going above 15 watts indicates that the quad-core option wins out. The YouTuber hasn’t provided a similar test for the Intel version just yet, but he plans to continue adding more benchmark results as they come in.

After years of being Nintendo’s domain thanks to the Switch, and before that, the 3DS, handheld gaming is certainly making a strong comeback right now. We’ve got the Steam Deck, of course, but Valve is not the only player in this arena. GPD Win Max 2 is an interesting alternative for those who might want to do a little more than just pure gaming from time to time. There’s also AOKZOE A1, an upcoming gaming console that also houses the AMD Ryzen 7 6800U CPU — so things are certainly heating up.

Facebook
Twitter
Pinterest
WhatsApp
Previous articleWidget stacks is the best iOS feature that Android desperately needs
Next articleI play PC games standing up, and you should too
- Advertisment -