HomeNewsYour Microsoft Teams video calls will soon be powered by AI and...
News 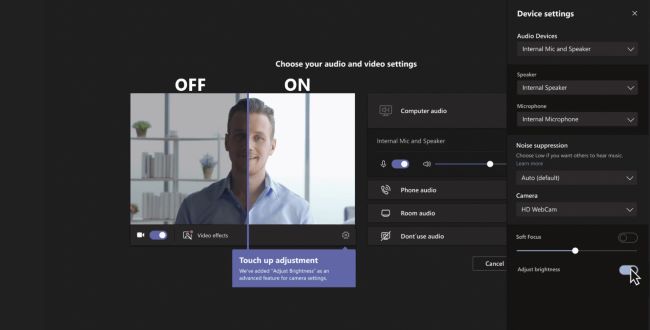 Microsoft has announced several new AI- and machine learning-based features for Teams that are intended to improve voice and video quality for a number of common areas, such as schools and workplaces.

Microsoft shared details about the updates on a blog on Monday, confirming that the new features will roll out for Teams in the coming months. The voice features include echo cancellation, dereverberation, interruptibility, and background noise suppression.

With echo cancellation, Teams can differentiate between you and sounds from a speaker using AI, allowing for the removal of echoes without disrupting the speech of one or more people.

With dereverberation, Teams can use machine learning to make up for poor room acoustics. After a first call, Teams can adjust the audio quality. Interruptibility, meanwhile, helps Teams maintain a more natural flow of conversation while not using a headset.

And finally, with background noise suppression, Teams uses AI to block out noises that might be going on during a call or a meeting such as a barking dog, a car alarm, or a slammed door. This feature is currently available for Windows, Mac, and iOS users, and will be available for Android and web clients in a future release.

Microsoft’s video also highlights some other Teams features, include real-time screen optimization, AI-based optimization even under bandwidth constraints, and brightness and focus filters.

Real-time screen optimization lets Teams use machine learning to decide the best optimization you need for ideal playback. With AI-based optimization, Teams allows you to work in the best video playback environment possible, even if you’re experiencing challenges with bandwidth. Brightness and focus filters in Teams are AI-powered filters that you can toggle to your ideal settings.

Microsoft recently added Teams to its Microsoft Store as a downloadable application in mid-May, after the program spent five years as a manual download. The app is available for Windows 10 and Windows 11 users, primarily for work and school installation. Having the app as a staple in its Microsoft Store likely allows the brand to more easily release updates, as well as highlightings the digital store as an essential part of the Windows ecosystem.

Microsoft also recently hosted its Microsoft Build developers conference in late May, where Microsoft Teams was a major topic of discussion. About 300 of the 500 sessions available to developers had some association with Teams, with new features such as Live Share being announced.