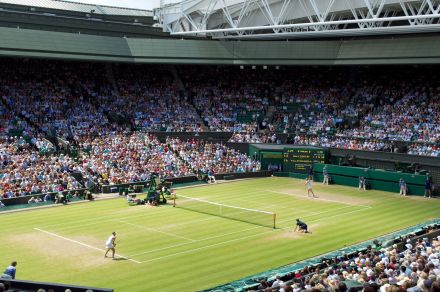 Wimbledon is back again with another two weeks of top class tennis involving the world’s best players.

The prestigious sports tournament, which takes place a the All England Lawn Tennis Club in London, kicks off on Monday, June 27 and runs through Sunday, July 10.

The organizers have once again partnered with IBM for the tournament’s official mobile app (iOS and Android) and website, which is designed to keep tennis fans up to date with all the action.

The software is powered by AI running on IBM Cloud and hybrid cloud technologies. A new feature for this year is “Win Factors,” which offers fans an increased understanding of the elements affecting player performance, such as court surface, ATP/WTA rankings, head-to-head history, ratio of games won, recent performance, yearly success, and media punditry, IBM said.

Another new feature is “Have Your Say,” an interactive prediction tool that lets fans register their own forecasts for match outcomes and then compare their analysis with the aggregated predictions of other fans and IBM’s AI-powered Likelihood to Win forecast.

– Live scores, results, and match statistics from every match on every court.

– Live video on The Wimbledon Channel from around the grounds from the start of play until the last point is played each day. Coverage also includes match clips, interviews, and special features.

– A live radio feed offers daily coverage of the tournament, including ball-by-ball commentary from games on Centre Court and No.1 Court. If you’ve never listened to tennis commentary on the radio before, it’s really quite something (especially during the lightning-fast rallies when the commentator has to keep up with what’s happening without getting their tongue in a tangle).

– Videos highlights, behind-the-scenes footage, interviews with players and those connected with the tournament, match previews, and footage of classic matches from over the years.

– Profiles of all of the players taking part in what is one of the most highly anticipated events on the sporting calendar.

– The full draws so you can see who’s playing who, and who might play who in future rounds.

– All the latest news from the tournament.

U.S.-based fans can watch Wimbledon coverage via ESPN channels, ABC, and the Tennis Channel. Anyone signed up to a  VPN service can also access BBC’s iPlayer for comprehensive coverage of the tennis tournament. Digital Trends has information on some of  the best VPN services currently available.

I stuck a cooling fan to my phone — did it make a difference?