HomeNewsThis e-bike does phone tech better than some phones
News

This e-bike does phone tech better than some phones 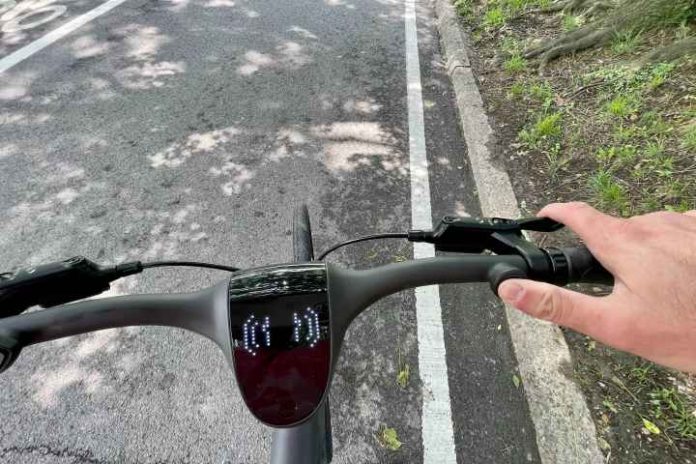 What if riding your bike was like using a smartphone? That’s the proposition behind the new Urtopia E-bike, which offers features more commonly associated with a product from Samsung or Apple rather than a bicycle manufacturer.

The carbon-fiber Urtopia has a built-in 4G connection, voice control, a fingerprint ID, and other technology. I have spent time riding the bike and playing with the tech and came away with the impression that this bike is both fun to ride and a gadget-lover’s dream.

Just like your phone, the Urtopia has a built-in 4G data connection that will let you track the bike if it’s lost or stolen. The cellular connectivity also lets Urtopia push out automatic software updates to the bike.

There is a touch button that doubles as a fingerprint reader on the right side of the handlebar. The idea is once you set up your bike, it will be personalized to your finger, theoretically making it theft-resistant. The fingerprint reader was easy to set up and worked well in my tests. However, the bike is light enough that a potential thief could just ignore the locking feature and pick it up.

The fingerprint button doubles as an electronic “bell” that makes warning sounds in case pedestrians get in your way while riding. You can choose from various sounds for the bell, which is fun. There aren’t any other bikes that I’m aware of that come with a built-in fingerprint reader, so this alone is enough to make the Urtopia unique. You can buy third-party bike locks with fingerprint readers like the SL Elite.

The heart of the Urtopia is an integrated display that uses charmingly retro LED dot-matrix display technology. The Smartbar, as the company calls it, lets you see the bike’s speed, modes, and notifications. The display is bright enough to be easily seen in bright sunlight, but glare made photographing it difficult.

A bike with Bluetooth

Like every smartphone, the Urtopia comes with Bluetooth built-in. I paired the bike to my iPhone 12 Pro Max using the Urtopia app that’s available from the Apple App Store. Setup took just a few clicks and I was then able to unlock my bike using Bluetooth. The app also uses Bluetooth to display a map of your rides, and how much CO2 you saved by riding your bike instead of using a car.

Like many smartphones — but unlike any bike I’ve ever encountered — you can actually speak to the Smartbar. The voice recognition lets you do things like turn the headlights off and on and increase the power level. I was skeptical that the voice recognition would work while I was riding, but it had no trouble understanding me even in heavy traffic or on a windy day.

It did seem a little odd to be talking to my bike. Other riders gave me some strange looks when I told my Urtopia to turn the integrated headlights on. I enjoyed using the voice control but I’m not sure how much value it adds compared to button controls.

Perhaps the most practical part of Urtopia’s many techie features are the seemingly mundane built-in turn signals. With the click of a button, you can turn on a pair of turn indicator projection lights that shine down onto the road. During my daylight rides, the turn lights are useful but on the dim side so I supplemented them with hand signals to let cars know where I was heading. The real utility of the turn signals became apparent after dark when they projected onto the road and it would have been too dark for me to signal using my arms.

Things start to get weird, but in a good way, when you start playing around with the Smartbar. First of all, the bike gives you audible notifications through a 3-watt speaker. The sounds are loud enough to be easily heard over traffic noises, but the beeps also got me a fair amount of attention as I rode through New York City.

Another unusual feature of the Urtopia is the built-in millimeter-wave radar. The radar is rear-facing, and it’s intended to help you watch out for cars or other bike riders that might be creeping up behind you. It wasn’t immediately apparent how you are supposed to interact with the radar, so I was surprised when a calm but stern voice called out from my bike to “watch out behind.” The radar had automatically detected a taxi zipping down the road. This feature seems like it could be incredibly useful in the violent video game that is riding a bike in New York.

Radar detection has become standard on cars, but it’s still not common on bikes. Electronics manufacturer Garmin makes bicycle-mounted radar called Varia, while the bike maker Cannondale recently introduced an integrated version of the Varia in some of its models.

What about the bike?

The design of the Urtopia is unusual enough to signal that it’s no ordinary bike. The carbon frame has a lightning bolt-shaped top tube that bends into a section of the seat post and then down to the seat stay. The frame neatly hides a 360 watt-hour Samsung Lithium-ion battery. Urtopia claims you will get a range of 30 to 80 miles depending on your weight and the power level you use. I got around 50 miles of range in my tests with the power set to the middle.

It’s also a lot like your phone in many ways, making it feel very familiar

The carbon-fiber frame is light for an e-bike at around 30 pounds. It’s also stiff enough to make riding a pleasure even when you run out of power. Keep in mind, though, that the Urtopia is single speed, which makes it great for flying around town but less suitable for hills.

I’m a longtime bike rider, but a poor mechanic, so I was a little nervous to find that I would have to assemble the Urtopia myself. Urtopia is a direct-to-consumer company, which means that the bike is shipped to your home in a cardboard box. You need to set the bike up yourself, but fortunately, this is a simple process that took me less than 15 minutes. It’s mostly a matter of putting on the pedals and charging up the battery.

For a tech lover who wants a futuristic bike, the Urtopia is in a class of its own. The single speed and limited battery capacity aren’t ideal for hardcore riders, but for $2,799, the Urtopia delivers many unique features and a lightweight carbon frame. It’s also a lot like your phone in many ways, making it feel very familiar, even if it is $1,000 more than a Samsung Galaxy Z Fold 3.