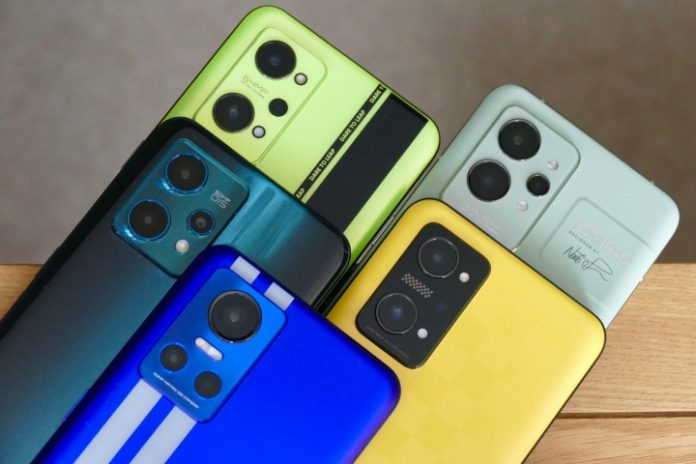 Realme has a phone addiction. The time has come for us to sit Realme down and have a serious talk about it together. The release of the Realme GT Neo 3T shows how bad things have gotten. While it’s a perfectly acceptable phone, it has no place of its own in Realme’s range, makes little sense over other models, and brings nothing new to the table.

Why does the GT Neo 3T exist?

I have used the Realme GT Neo 3T for a couple of days, and if you had asked me what the difference was between it, the GT Neo 3, the GT Neo 2, the GT 2, the GT 2 Pro,  and even the Realme 9 Pro+, I would have paused, said err and umm, and then changed the subject. I couldn’t tell you without looking at the spec sheet or referring only to the different colors and finishes.

Even then, I’d have to think for a bit. Which one had the muscle car paint job? Or the one that felt a bit like paper? Oh, and remind me, what was the GT Neo 2 like again? I’m not even sure if I’ve used the GT 2. Even knowing which phone is which wouldn’t have helped place the GT Neo 3T in the range. Why? It’s almost identical to the GT Neo 2, which came out in September of last year. It has the same screen, processor, RAM options, cameras, and battery.

The big difference? The GT Neo 3T has 80-watt fast charging instead of 65W. I charged the Realme GT Neo 2 using its 65W charger, and after 12 minutes, it reached 33% (and was fully charged in 38 minutes). The GT Neo 3T’s 80W charging took 12 minutes to get to 48% and fully charged in 36 minutes. Sorry, Realme, that’s not enough reason to relaunch the same phone. Plus, if you want the slightly faster 80W charging, the non-T Realme GT Neo 3 is right there.

There’s no point in looking at the software for differences, either. They all use Android 12 (after an update for the Neo 2) and Realme 3.0, which looks the same as Oppo’s ColorOS and very close to OnePlus’s OxygenOS. Even the admittedly cool racing finishes are just variations on the same theme. The Realme GT Neo 3T exists, but I don’t really understand why.

Not enough evidence of addiction? We’re not done yet. If we’ve already established that the new GT Neo 3T is barely any different from the GT Neo 2 released at the end of 2021, what about the GT Neo 3? By borrowing OnePlus’s “T” terminology, you may think it’s an updated version of the GT Neo 3, but it’s not. It’s a weird sideways step.

The GT Neo 3 came out in March and has the same-size screen, a MediaTek 8100 processor with the same performance as the Qualcomm Snapdragon 870 in the Neo 3T, and a 50-megapixel camera rather than the 64MP camera on the GT Neo 2 and GT Neo 3T.  It’s a few grams lighter and a tiny bit thinner (0.5mm at the most, so you won’t actually notice), and the cameras are organized in a slightly different way in the camera module. However, the module is the same size and shape, and in the same location on the body.

What’s amusing about the GT Neo 3 is that Realme couldn’t help but make a second, practically identical version. There’s one GT Neo 3 with 80W charging and another with the new 150W fast charging system. That’s it. Two phones that are exactly the same, just with a different charger in the box. Then, if those two versions weren’t enough, the GT Neo 3 with its 150W charger is also the basis of the stunning Naruto special edition.

Realme does have different smartphones for different regions. But the GT Neo 3 and Neo 3T are launching in Europe, and all its many GT phones, Neo or otherwise, will be available in India. It’s in India where Realme doesn’t even try to hide its addiction. Indian buyers also get the Narzo model range (which looks like Lite versions of the GT and GT Neo models), plus the Realme 9, Realme 8, Realme 5, Realme C, and Realme X ranges. I counted 40 phones on its website, and 15 belong to the Narzo and GT series. Yet I’ve no idea how you’d begin to choose, or really why you’d buy one over the other.

A lack of focus hurts the brand

Like Samsung, Realme is taking the “cover every price point” approach to making smartphones. Prices for the core models mentioned here range from around $500 for the GT Neo 3T up to $650 for the GT Neo 3, and around $800 for the GT 2 Pro. It’s only by looking at the prices that the range makes some semblance of sense, but then remember Realme has dozens of other phones all priced at and around the prices of these three models, all with different names and only slightly different specs.

The sadness and depth of Realme’s phone addiction are unfortunate, as underneath the many revisions and spurious upgrades, it has a very strong core lineup of phones. The Realme GT 2 Pro is excellent, the GT Neo 3 with the 150W charging is genuinely forward-thinking, and the GT Neo 2 from 2021 still has plenty of life left in it at a reasonable price. Throwing pointless T versions, Master Editions, and a whole lot more at the wall only dilutes the range and confuses people.

We’re hopeful that, once sat down in front of concerned friends and handing it both the GT Neo 3T and GT Neo 2, Realme will have a sudden moment of realization, and admit producing the same phone twice in less than a year doesn’t make any sense. Understanding the problem is the first step on the road to a clearer future for Realme’s product range.