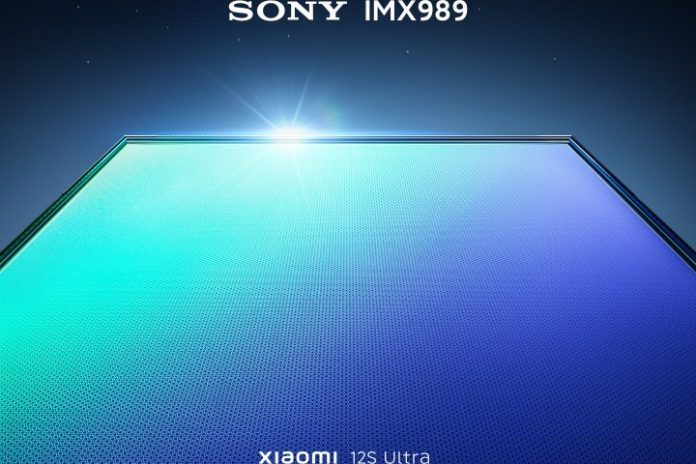 Sony is working on a new smartphone camera sensor called the IMX989 that has a massive 1-inch sensor profile. The official Weibo handle of Chinese smartphone maker Xiaomi has confirmed that the upcoming 12S Ultra slated to debut on July 4 will come armed with Sony’s massive phone camera sensor.

Sony Semiconductor Solutions Group, the division which makes camera sensors, is yet to officially detail the camera sensor in question. However, this isn’t the first time that Sony has made such a powerful imaging sensor. The Xperia Pro-1 comes equipped with a larger 1.0-type Exmor RS CMOS sensor that is based on the RX100 VII’s sensor and developed especially for the Sony flagship.

Additionally, Xiaomi won’t be the first smartphone maker to chase a 1-inch camera for its high-end camera sensor. The Sharp Aquos R6 that came out in 2021 had a 1-inch camera sensor at the back, and its successor, the Aquos R7 also followed in its footsteps with a 47.2-megapixel 1-inch sensor. Leica also packed a 1-inch sensor on the Leitz Phone 1 that made its debut last year.

Sony aims to one-up Samsung with a different approach

When it comes to mainstream flagships with the biggest sensor profile, the Xiaomi Mi 11 Ultra takes the cake with a 1/1.2-inch camera sensor. However, it appears that Sony is going in a different direction this year, one that deviates from rival camera sensor maker Samsung.

Samsung recently lifted the covers from the ISOCELL HP3 camera sensor which offers a staggering 200-megapixel sensor, featuring the smallest pixels that Samsung has ever crammed on a sensor. Additionally, the sensor in question also relies on the new Tetra2 Pixel Binning tech that combines four pixels into one larger pixel, and then again merges four such artificially-created superpixels using special algorithms to create an even larger “superpixel.”

This artificially created pixel, which is four times larger, collects the maximum amount of light and produces brighter images with a higher amount of detail. You can read more about how pixel binning works to overcome the pixel and sensor size disadvantage to produce impressive results on the Galaxy S22 series phones.

Sony’s upcoming IMX989 sensor underplays the pixel-binning chore with a larger sensor that also fits in bigger pixels, allowing it to curb the noise to much higher levels and produce more natural-looking colors. This approach gives it a fundamental advantage over the Samsung sensor as the latter relies more on software tricks and algorithms.

A leak from DigitalChatStation on Weibo claims Sony’s 1-inch camera sensor will peak at a resolution of 50 megapixels. Sony already has a healthy number of 50-megapixel sensors in its portfolio that appear in flagships like the OnePlus 10 Pro and the Oppo Find X5 Pro, but there is no word on what other inherent advantages the IMX989 brings to the table aside from the larger sensor profile.

Do keep in mind that a 1-inch sensor advertised by brands doesn’t mean that the sensor has a physical size of one inch. The actual sensor diagonal is significantly smaller, likely somewhere around 16 millimeters. The disparity has to do with a long-lived industry advertising practice dating all the way back to the days of CRT televisions.

Those machines had a cathode ray tube for carrying streams of electrons in order to project an image. The tubes had a diameter of, you guessed it, one inch. However, the photosensitive area of the tube was much smaller at around 16 millimeters square, which also happens to be the physical diagonal of most modern 1-inch camera sensors. You can learn more about it in this interesting video.

Irrespective of sensor size reality, Sony’s IM989 sensor will still offer a tangible advantage over Samsung’s pixel-dense ISOCELL cameras. However, that doesn’t mean Sony’s sensor will necessarily be able to beat Samsung’s offering, because a lot depends on how well it has been tuned. Just take a look at how Apple’s current-gen iPhones and their 12-megapixel cameras leave the competition far behind, despite the rivals packing cameras of up to 108-megapixel resolution.