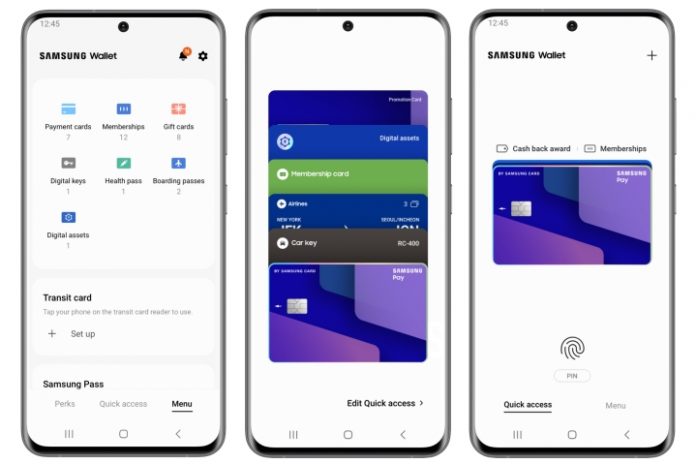 After years of offering Samsung Pay and Samsung Pass, Samsung Wallet is launching today as the long-overdue digital wallet option for Samsung Galaxy devices. Samsung Pay and Samsung Pass have been adequately working as two separate parts of the Galaxy wallet puzzle, but today the company has announced that both services are merging to become Samsung Wallet. The digital wallet isn’t just a rebranding of the two features. Instead, it’s meant to be an all-encompassing app that holds everything you’d find in a physical wallet — not unlike Apple Wallet and Google Wallet.

Samsung Wallet will be able to hold credit cards and membership cards, allowing Samsung device owners to have one-swipe access to payment options when checking out in stores. COVID-19 vaccination cards can also be stored in Samsung Wallet, along with multiple identification options coming later this year for things such as driver’s licenses, state IDs, and student IDs.

Samsung Wallet is also the new home for password management which was previously handled by Samsung Pass. The biometric safety checks required to access stored passwords will remain for enhanced account security, and to give Galaxy owners peace of mind knowing that they’re the only ones able to access their sensitive data.

Additionally, all digital keys can be stored in Samsung Wallet. This means that users with smart homes won’t necessarily need to bring their keys with them when leaving the house. Digital key support also works on car keys for select BMW, Genesis, and Hyundai models. At launch, Samsung Wallet digital car keys will work with the BMW 1,2,3,4,5,6,8 Series, 5-X7, and iX models released from July 2020 and later. Genesis supports digital car keys with the GV60 and G90, while Hyundai compatibility is limited to the Palisade. While the initial rollout is fairly limited, Samsung does say that additional partnerships are “expected.”

Samsung isn’t the first major mobile company to merge some of its previous digital wallet efforts into one place. As recently as this May, Google announced plans to resurrect its Google Wallet platform. Both Google and Samsung seem to be playing catch-up with Apple as it’s been paving the way for digital wallets for quite some time. Regardless of why Google and Samsung are consolidating their individual wallet efforts, it’s certainly nice for device owners to have a more streamlined digital wallet at hand.

Samsung Wallet is available now in France, Germany, Italy, Spain, the U.K., and the U.S. for all Galaxy devices running on Android 9 Pie or later. To access it, open the Samsung Pay or Samsung Pass app on your device and follow the prompts to migrate to Samsung Wallet.