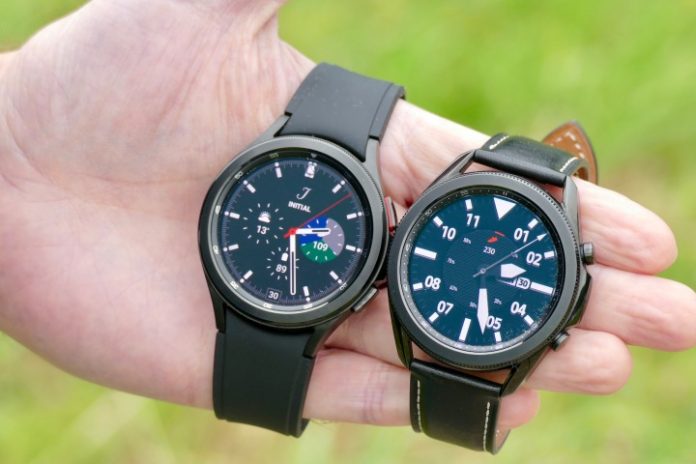 Samsung is still months away from its next Unpacked event where it is expected to reveal new versions of its Galaxy smartwatches, but that doesn’t mean leaks have to wait, too. On the contrary, some promising rumors and juicy findings in the official code of Samsung software have already revealed bits about the upcoming Galaxy Watch 5 series smartwatches. Here’s everything that we know so far.

Samsung’s latest-gen smartwatch portfolio includes two models — the Galaxy Watch 4 and Galaxy Watch 4 Classic. It appears that Samsung is getting rid of the Classic branding this year, just the way it retired the Active moniker a generation earlier. Instead, the naming convention is now going to be a lot simpler, and more mainstream.

The latest beta of the Samsung Health App, first spotted by 9to5Google, namedrops the upcoming Galaxy Watch 5 and Galaxy Watch 5 Pro models, but there’s no mention of a Classic model for the next generation. SamMobile also claims to have got confirmation that there won’t be a Classic model making an appearance this year.

Notably, the Galaxy Watch 5 is said to go on sale in two size options, while the pricier Pro model will be limited to just one. Whether the sizes are going to remain the same as the Galaxy Watch 4 pair remains unclear.

The Galaxy Watch 5 duo will likely come armed with sensors such as a heart rate monitor, body composition sensor, and the electrocardiogram (ECG), plus pending approval from regulators, Samsung is also expected to offer tricks like blood pressure monitoring. Expect to see SpO2 measurement and fall detection too.

Interestingly, a Reddit user has spotted the mention of an interesting feature called “skin temperature during sleep” in the latest beta build of the Samsung Health app. The feature apparently relies on a system of lasers fitted on the underside of the smartwatch, which flash on the skin to measure temperature. The app notes that the feature is “used to forecast your cycle more accurately,” suggesting it may be used for period tracking.

Since the current portfolio of Samsung’s smartwatches lacks a temperature sensing trick, it appears that the beta app is just prepping for the Galaxy Watch 5 Series that will offer the aforementioned facility. Interestingly, Apple is also said to be experimenting with a body temperature measurement feature for its next-gen smartwatches.

There is no dearth of round smartwatches out there, but what made Samsung’s Galaxy Watch series stand out was the interactive bezel control system. On the likes of the Galaxy Watch 4 Classic, it was the physical rotating bezel that truly set it apart. The vanilla model went for capacitive controls alongside the bezels.

Unfortunately, it appears that the rotating bezels will be gone soon. As per reliable leakster Ice Universe, the rotating bezel is going away this year. According to him, neither the standard Galaxy Watch 5 nor the Galaxy Watch 5 Pro will feature the rotating bezel system that has become a hot favorite for a lot of buyers. On the positive side, Samsung could switch to using premium materials like sapphire glass and titanium metal for the casing, following Huawei’s lead with the Watch GT 3 Pro.

A bigger battery, at last!

What about battery life? Rumors so far point to Samsung attempting to push the next Galaxy Watch’s battery past the one-day battery life barrier, although by how much is unknown.

Regulatory filings spotted by SamMobile suggest the Galaxy Watch 5 Pro will feature a 572mAh battery, which is quite a massive upgrade over the 361mAh unit fitted inside the Galaxy Watch 4 Classic. We only hope that the next iteration of Google’s smartwatch OS nails the battery optimization part and allows a smartwatch to last more than a day.

So far, Samsung has not officially spoken about the launch prospects of its next-gen smartwatches. But going by the cadence of previous launches, the Galaxy Watch 5 series might make an official debut around August. Samsung might reveal them alongside its upcoming foldables — Galaxy Z Fold 4 and Galaxy Z Flip 4 — at the next Unpacked event.

Coming to the pricing part, there haven’t been any credible leaks covering that aspect. The Galaxy Watch 4 starts at $25o, while the Classic model goes for a $100 premium. Samsung will definitely want to maintain a competitive pricing strategy against Apple and will want to keep the asking price of the Galaxy Watch 5 below the $300 mark, at least for the entry-level model without cellular connectivity perks.

Facebook
Twitter
Pinterest
WhatsApp
Previous articleRight to repair in New York is about to become much easier
Next articleGurman: MacBook Air Not Expected to Come in a Range of iMac-Like Colors
- Advertisment -