Outlook on Mac is getting a great feature from MacOS Ventura 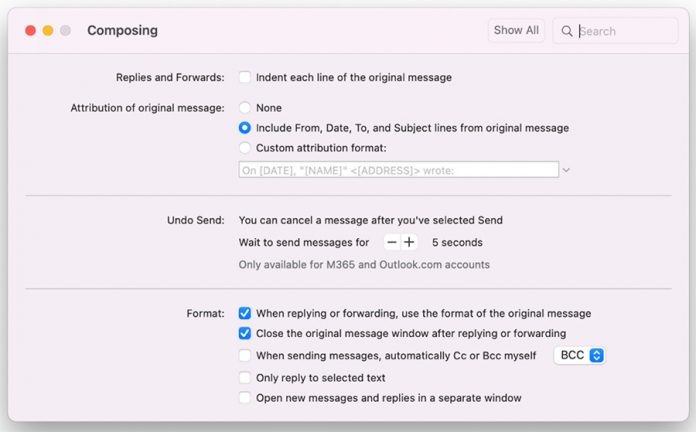 Ever wanted to stop the process of sending an email that you typed out on your Mac shortly after sending it out? This abilitiy is something Apple is adding to the MacOS Ventura mail app later this year, but now Microsoft has a solution for you, too.

Now in testing with Office Insiders is an “undo send” feature for Outlook for Mac. This ability has been one of the long-requested features for Outlook on Mac, and can easily be set up right now for beta testers. It is not to be confused with a true message recall, however. The feature just delays sending a message for a short period of time. True message recalls are only available on Outlook for Windows.

The new option can be set up under Outlook > Preferences > Composing in the newest Office Insider versions of Outlook for Mac (Beta Channel Version 16.62, build 22050200). From there, under the Composing dialogue, you can set a delay time of either 5, 10, 15, or 20 seconds. When set up, you’ll see that you’ll get a new prompt at the bottom of the app each time you send an email, with a new Undo button. Note that it only works with Microsoft 365 and Outlook.com accounts, however.

Those familiar with Gmail, as well as Outlook for the web, might find this feature welcoming. These platforms have had the ability to delay sent messages for quite a while.

“Outlook for Mac has your back. You can now use the Undo Send command to cancel a message before it’s sent, giving you more control and confidence over your communications,” said Priya Ganta, a senior product manager at Microsoft.

It is not certain when every Outlook for Mac user might end up getting this undo send feature. Typically, features tested in the Office Insider program take a few months to roll out to non-beta testers. And it only happens once Microsoft deems features are stable enough.

Not all Office Insiders will end up seeing delay undo right now, either. Microsoft typically rolls out these features gradually to a subset of users over time to ensure everything works smoothly. Features can even be removed, according to the company, though it is rare.