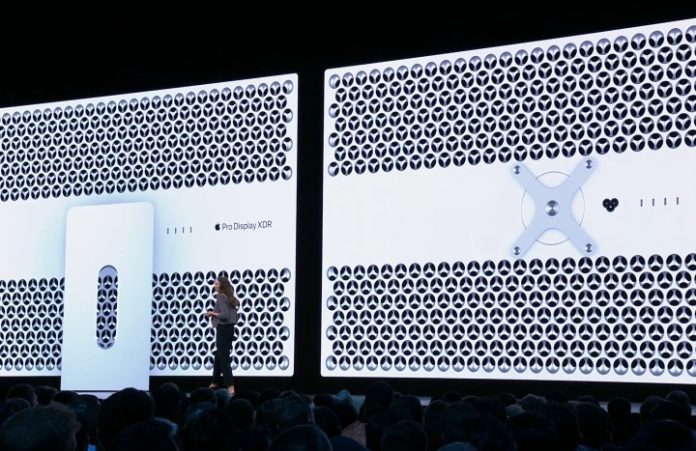 What monitor could be more expensive than Apple’s Pro Display XDR? How about two of them? According to an Apple patent watchdog, Apple has invented a dual display stand with the ability to perfectly balance two Pro Display XDR screens without getting in the way.

Patently Apple discovered patent 11371644 had been granted by the U.S. Patent and Trademark Office. The patent reveals a stand with two legs, a rotating shaft across the top from where two Pro Display XDR monitors can hang, and a rack-and-pinion rotating shaft to keep both monitors perfectly aligned to each other.

Most people use individual stands for their dual-monitor setup, and these stands can get in the way. Then there’s the issue of getting the monitors aligned just right, a frustrating task for professionals. Apple’s new patent purports to solve these problems with the dual-display stand.

“Computer device designers often desire to control positioning of a computer monitor or similar display at whatever height and orientation are best suited for the needs of the user,” Apple wrote in the patent background. “While various existing display stands provide tilt, rotation, and vertical height adjustment of monitors, these features often come at the expense of being convenient and natural to use.”

The dual display keeps its two legs tucked away behind the screens, while the connecting shaft keeps both monitors at the same height and tilt. There are rollers riding on rails inside the shaft to maintain perfect spacing between the monitors.

Another interesting addition to the stand is a universal joint that synchronizes the rotation of both segments of the main shaft. This allows the user to invert the stand into a V shape without disturbing the alignment of the monitors on either end of the shaft.

Finally, the stand includes a friction engine, suggesting the entire device is motorized and could potentially be controlled directly from a Mac.

Apple’s current Pro Display XDR stand costs over $1,000. Although it perfectly balances the big display, most of the cost is aesthetic. We don’t know what Apple will charge for a dual-display XDR stand but we’re confident it will be prohibitive.

Of course, the XDR line isn’t made for regular consumers. Professionals, studios, and design agencies are the users of an XDR dual-display stand. With powerful new MacBook Pros about to hit the market later this year, it seems Apple has professionals on its mind.

Upgrading the Apple M1 to the M2 ends in disappointment